It's been only 26 years since a Supreme Court ruling opened the door for women's membership in Rotary International. Among the more than 1.2 million Rotarians worldwide, women account for 22% in North America and 15% internationally. Kerry Kornhauser, a Rotarian from Melbourne, Australia is certain we can do much better at gender equity in every aspect of business, including Rotary Clubs which are 83% male in Australia.

As past president of the Rotary Club of Albert Park, Kerry has planned a high impact Women in Rotary event to coincide with International Women's Day on March 8th. Rotary Clubs in the UK and Canada are joining her celebration and will pass the torch from one country to another. "Are there US Clubs out there who want to join the celebration?" Kerry wants to know. If your answer is yes, you can contact her at Women in Rotary Australia. Kerry, of course, welcomes hearing from clubs outside the US as well.

In 1978, the Rotary Club of Duarte, California broke the barrier for women in Rotary when it waged a court battle to admit three female members. That small club changed Rotary International's constitution. Not surprisingly, Rotary's first female president hailed from the Duarte Club.

This year's theme for International Women's Day is "The Gender Agenda: Gaining Momentum." It's a perfect fit for Australia's Women in Rotary event, "Is it all in The Genes?" Leave it to no-nonsense Aussie Sheilas to get right to the point and ask tough questions that will certainly bring lively and healthy debate to the Melbourne Rotary celebration:

Are men and women programmed differently?

How does biology determine our career success?

Do good genes count more than a good resume? 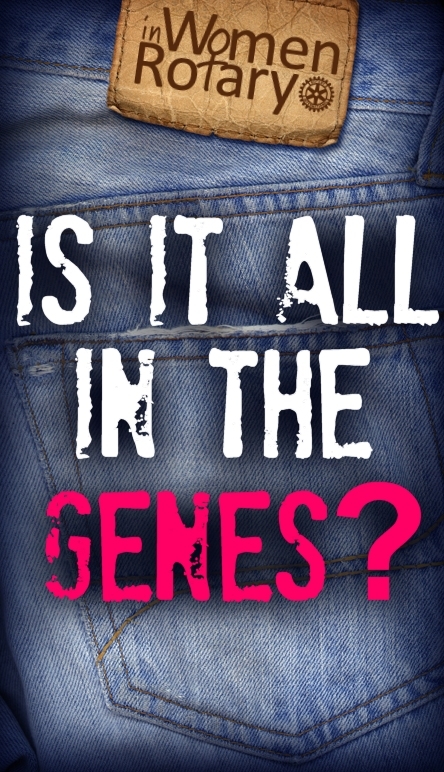 Kerry hails from a country that was the second in the world, after New Zealand, where women gained the right to vote. Australia's Prime Minister Julia Gillard offered this message in support of Kerry's Women in Rotary mission:

It has been a successful journey but still an incomplete one; there is so much more still to be done, both here and in other nations where progress has not been so great. I am proud of the commitment to women's participation shown by Rotary, including the work of Women in Rotary so that female Rotarians have a fair chance to undertake leadership and service. On International Women's Day, we affirm enduring values that lie at the heart of modern Australian life, namely equality and dignity for all women so we can enjoy lives filled with opportunity and freed from discrimination and violence.

Kerry and other members of Women in Rotary Australia are on a crusade to put these ideals into practice. They're also following Rotary's longstanding commitment to humanitarian issues. All proceeds from the March 8 event will be donated to Violence Free Families, a Rotary-supported initiative that educates Australian families challenged by violent behavior, and to Kids Foundation, an organization that helps keep Aussie children safe.

I had the pleasure of meeting Kerry last year when I spoke to her Rotary Club in Melbourne. Looking out into the audience at the Albert Park and Port Melbourne gathering, I could see the results of Kerry's recruitment in the gender-balanced crowd that was about 50% women. Lots of female faces, all successful businesswomen, offered a powerful message to the younger folks in the audience just starting their careers.

We still have a long way to go. Even though we've made great strides forward, pay equity is a continuing global concern. In the US, women earn only 77 cents on the male dollar for performing the same job. And the gap is even wider for African-American and Latina women. Family responsibilities are not the reason for this pay disparity since these statistics are based on women and men who each work full-time. According to the National Committee on Pay Equity, the wage gap has barely budged over the last 50 years. In his Inaugural Address, President Obama underscored Gillard's sentiments: "Our journey is not complete until our wives, our mothers and daughters can earn a living equal to their efforts."

One month from today, women and men across the globe will gather on March 8th to celebrate International Women's Day and champion women's equality in the workplace, in politics, and in society. Join us in celebrating what the Mayan calendar suggests is the start of the era of women. Let our voices resonate in a worldwide chorus rising from every continent and working to forge equality for everyone.