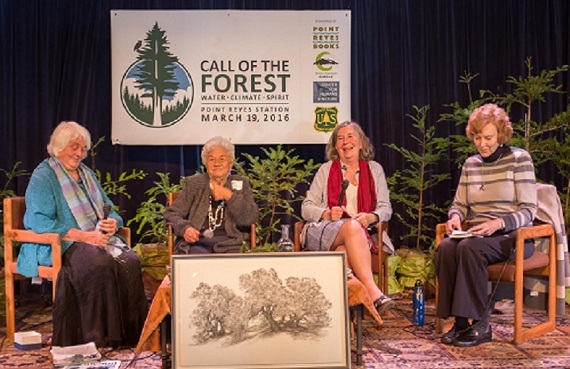 Diana Beresford-Kroeger appears to be following the dictum, "Make no little plans." The 71-year-old self-described "renegade scientist" has a plan to put everyone on Earth to work planting trees. Her "Bioplan" calls on every able-bodied person to plant a tree a year for six years to bring back the world's lost forests.

Her work was the inspiration for a recent day-long, "Call of the Forest: Water, Climate, Spirit" conference attended by more than 200 people in the Northern California seaside hamlet of Point Reyes. The event featured a special preview of Beresford-Kroeger's forthcoming feature film, Call of the Forest: The Forgotten Wisdom of Trees, inspired by her book, The Global Forest.

Her website calls the documentary, an integral part of her, "personal mission to educate 7 billion people about the trees outside their doors." When completed in the fall, it will be accompanied by an extensive app to provide people with details about how and where to plant appropriate trees for their localities.

The film highlights forests' importance for human welfare and for the sustenance of other ecosystems and species. Apart from the usual story of how forests purify the air and provide numerous other invaluable benefits, we learn, for example, that when a forest was clearcut in Japan for farming, the humus blew away and the land became arid and infertile.

To the surprise and dismay of local fishermen, the marine ecosystem downstream from the clearcut forest was also decimated -- deprived of iron and other vital nutrients that had once run off from the forest. "The oceans feel the effect of a forest clearcut hundreds of miles away," Beresford-Kroeger said.

A botanist and medical biochemist by training, Beresford-Kroeger is deeply concerned about the connection between deforestation and climate change. (Deforestation is a major source of greenhouse gases, and growing forests sequester carbon and help regulate the climate.) Her concern extends to the vast ancient boreal forest, which contains about a third of the world's forest area. This enormous biome covers a large part of the Northern Hemisphere, and, because of its high latitude, is likely to be greatly affected by climate change.

Tar sands development has already destroyed many square miles of the Canadian boreal forest and an increase in fire and insect infestations related to climate change have also had a negative impact. "You can't replace or replant the boreal forest complexity," Beresford-Kroeger warns. "Once it's gone, it's gone."

Beresford-Kroeger is not alone these days in calling for a massive, global reforestation effort. Earth Day Network has pledged to get 7.8 billion trees planted around the world within four years -- one for every person on the planet by the group's 50th birthday. Its Canopy Project has already planted over 3 million trees in 32 countries since 2011, concentrating on areas most in need of restoration.

The United Nations Environment Programme and its partners launched a Billion Tree Campaign in 2006, planting more than 12 billion trees in five years, according to their website, before turning the campaign over to the Plant-for-the-Planet Foundation. (The Billion Tree Campaign was inspired by Nobel Peace Prize laureate Professor Wangari Maathai, founder of Kenya's Green Belt Movement, which itself has planted 30 million trees since 1977.) The Nature Conservancy also has a Plant a Billion Trees Campaign.

A local representative from the Turtle Island Restoration Network (based near Point Reyes), introduced the Call of the Forest conferees to the organization's new 10,000 redwood tree planting campaign as a response to climate change, which Turtle Island calls, "the greatest threat to life on Earth."

Coastal redwoods, however, are particularly effective at sequestering carbon because they are fast-growing, can survive for 2,000 years or more, and can store enormous amounts of carbon in their massive bulk. The trees are also native to the San Francisco Bay Area where they provide excellent protection to streams and riverbanks and habitat for native species like critically endangered coho salmon.

Turtle Island's goal is to restore 10,000 redwoods in the Bay Area over the next three years as part of its Salmon Protection and Watershed Network (SPAWN) program, which works to protect endangered coho salmon and restore their creekside habitat.

The group is calling for people to plant the trees at their homes and schools and for volunteers to help grow the redwood seedlings in their nursery. They are also looking for corporations interested in offsetting their carbon footprints.

Water laws, she said, need to be "revisioned" to reflect our interconnections with water. Current water law only values water when it is used or withdrawn from a waterway, she noted. 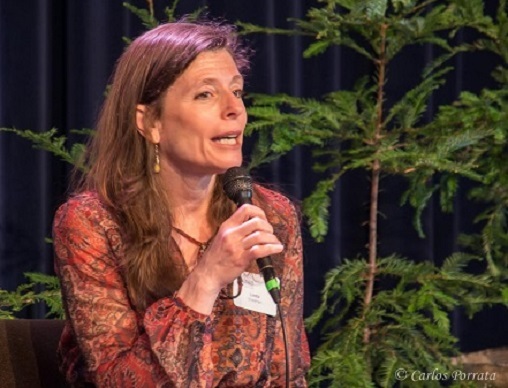 Brock Dolman, co-founder of the Occidental Arts and Ecology Center, focused attention on how the language we use to describe water and other aspects of the natural world can negatively influence our behavior toward it. He pointed out that we use an economic vocabulary to speak of water as a resource, an asset, or as a commodity. "Is the planet a community or a commodity? Is water a community or a commodity?" he asked. 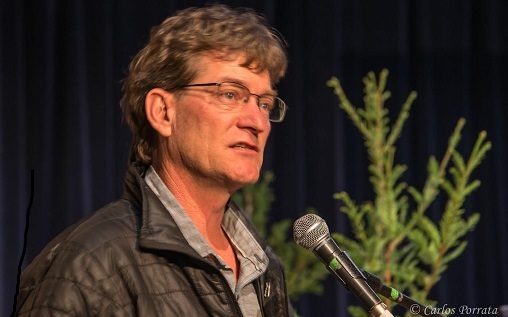 Other conference speakers also addressed the commodification of nature. Award-winning author and conservationist Rick Bass, who is working to protect the biodiversity of Montana's remote Yaak Valley, said that in contrast to the corporation's economic myth that resources are inexhaustible, we need to establish a story of reciprocity and respect for nature.

The Call of the Forest conference was presented by Point Reyes Books and the nonprofit Black Mountain Circle and was co-sponsored by the Center for Humans and Nature and the U.S. Forest Service, with additional support from the Entrekin Family Foundation.