In an increasingly fragmented and narrowly divided America, no voting bloc is too small to be ignored. So, for those who seek their votes, the riddle of working class whites remains. Are they driven by economics, or values, or race, or something else? Have they changed their politics since the days of unions and stay-at-home moms? Or have they stayed the same even as their numbers declined?

To satisfy our curiosity, we looked at two generations of survey data from the American National Election Study. Other than declining numbers, these surveys indicate little that has changed among working class whites is unique to the working class. . There is a combination of populist governmental activism, combined with racially conservative policy restraint that appeals to working class whites.

If you say working class whites are whites without a college education, you report substantial shifts in the group to the Republican Party. If it's low income, you find growing support for Democrats. If you look at union members and their families, you see more orientation to economic progressivism. 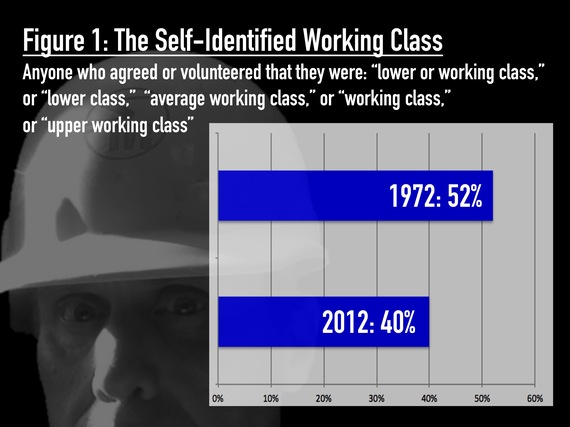 It wasn't always this way. Back in the 1950s, one in three workers was in a union and most white voters were working class. Down South, unions were weak, but the small town white working class and farmers provided the backbone for populist Democrats. These voters were a critical part of Roosevelt's New Deal coalition, cobbled together from elite liberals, urban minorities, working class and labor union voters, older Americans, and southern whites. They dominate the presidency for nearly 40 years, and congressional elections 60 years. But the coalition aged and unraveled. Ever since, the national Democratic Party has struggled with white voters with calloused hands.

But the working class experience is less relevant to whites than ever before. The American upper income earners are growing as the middle-income earners (between 50K and 100K) are shrinking. Whites and Asian Americans are far more likely to be in the middle and upper income categories, and in occupations associated with them, than are blacks and Hispanics. 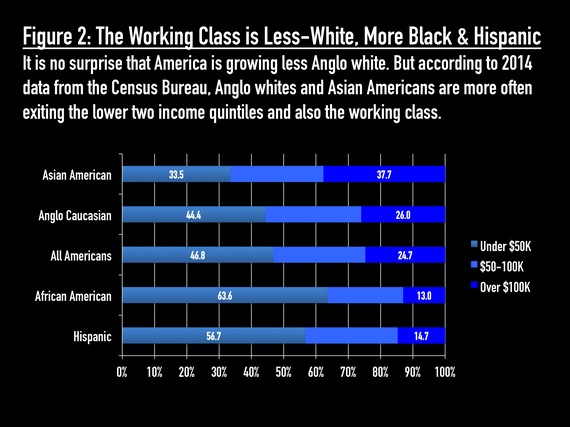 WHY THE WHITE AMERICAN WORKING CLASS IS CHALLENGING TO POLITICIANS. The Democrats struggle with the white working class because they present enduring contradictions. A half-century ago Martin Lipset observed white working class voters are often politically and religiously conservative. They are more charitable than white collar middle income earners and professionals. And (unlike Europe) the white working class in the U.S. never organized major socialist political parties or challenged the fundamentals of the capitalist economic system (this is what Louis Hartz meant when he said there was an 'American Exceptionalism' - but more on that another day).

WHY CARE ABOUT WORKING CLASS VOTERS? The working class used to be an "easy lift" for national Democrats. Democrats did great things for labor in the 1930s. Nearly one-third of the voters of the U.S. were in a labor union in the mid-1950s --this number has fallen to 11% by 2011. Democrats in manufacturing states could count on substantial numbers of voters coming from working class and union households. In the south anti-union sentiment in the 19th century kept organized labor at bay, and in the Deep South in particular much of the laboring class was often not white, and also often excluded from politics through Jim Crow. But in the manufacturing states, labor provided organizational and financial support as well as votes. Democrats think working class whites need its policies. Republicans think working class whites need its values.

Several explanations exist for the unraveling of the coalition. These explanations are usually rooted in the consequences of progressive politics. The New Deal and progressive policies after World War II like the G.I. Bill spread economic prosperity. But liberalism changed in response to the demands of new groups (ethnic and racial minorities, women, environmentalists), and the product was inconsistent with the old liberalism of the New Deal. Liberalism wasn't about making sure that workingmen could provide a living for families anymore. It was about compensating grievances of people on the margins. Was the price to Democrats the white working class?

A decline of affection for Democrats among working class whites is evident in ANES data. But, as it turns out, they've cooled no more toward Democrats - or Republicans-- than anyone else. A look at the 'feeling thermometer' scores for the two major parties shows that the downward trend of affect toward both parties is the same for working class whites as other whites (See Figures 3 & 4). The level of warmth is, on average, a little higher for Republicans than for Democrats. 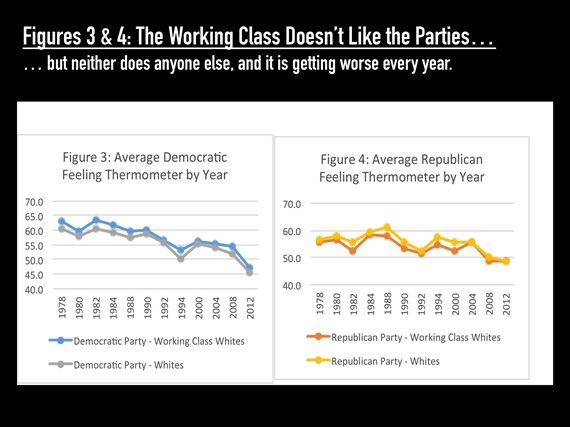 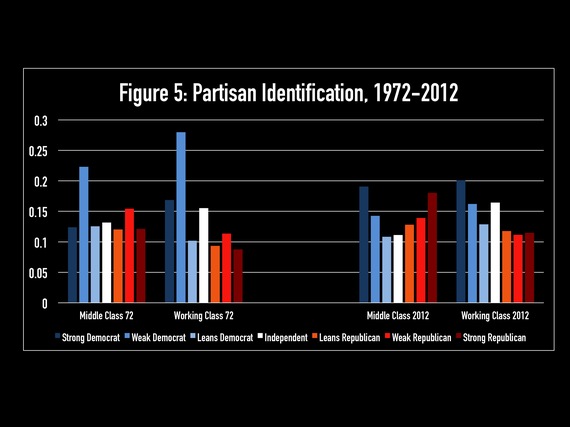 SO HOW ARE WHITE WORKING CLASS VOTERS DIFFERENT? We used a technique called OLS regression to introduce statistical controls for several white voter features, including party identification, ideology, education, income, age, and sex, so we could isolate the effect of being self-identified white working class, and living in a union household, to compare working class whites to other whites on attitudes towards government, the role of government in the economy, and race issues.

Attitudes Toward Government: Whites in the working class are more distrustful of government than other Americans. But white Americans in general have declining trust in government, think government is growing less responsive, and their external efficacy is weakening. With each passing year, citizens become less trustful, believe government is less responsive to their concerns, and are less convinced they can influence political decision-making. Working class whites express greater cynicism toward government than the middle or upper class. However, these differences are not larger now than 40 years ago.

Attitudes Toward Equalitarian Values and Government Spending: A major controversy about working class whites is that they vote against their economic interests because of social issues - 'what's the matter with Kansas' argument popularized by Thomas Frank. Data from ANES show working class white support for government jobs, government spending for services, and equalitarian values are unchanged since before the Reagan Revolution.

One way of interpreting these results is to say that self-identified working class whites should be receptive to populist arguments for a more active federal government. But, that support is conditioned on government activity being aimed at improving the wages and employment opportunities available to white working class people.

Racial Attitudes: Does race matter? There has always been a racial subtext to the white working class. In the South, Jim Crow kept black labor from competing with white labor. Nationally, some organized labor unions were slow to integrate. And, tensions over integration have always been most pronounced in working class white neighborhoods, which most often bore the disruption from integration. 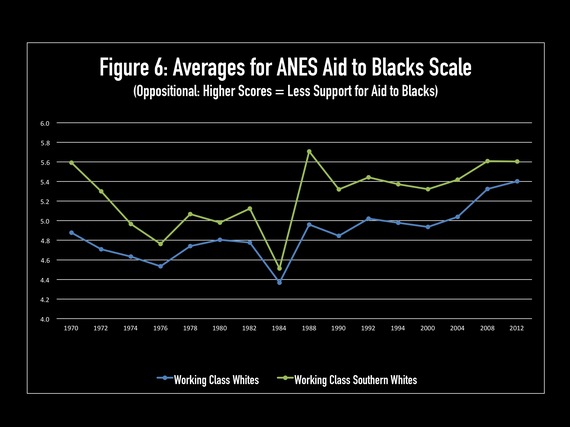 These are not surprising findings. But, these results describe a political world where the white working class is increasingly hunkered down. They confront a political environment where they are divided from other whites based on education, economics, and expectations. And, they are divided from working people of color by both different political worldviews but also skepticism regarding how government engages race policies. And, they have become smaller as a political force and have less economic clout and security in this era than at any time in the last 80 years.