A new study in the British Medical Journal (BMJ) has found that diners underestimate the amount of calories in fast food meals. Nearly 3,400 adults, teens and school-aged children were surveyed at 89 fast food restaurants in the United States (in New England) during 2010 and 2011.

The study, "Consumers’ Estimation of Calorie Content at Fast Food Restaurants," found that teens underestimate calories the most. “We found that people, especially teens, are consuming more calories than they think they’re getting when they eat fast food,” said lead researcher Jason Block, MD, MPH, of the Harvard Medical School/Harvard Pilgrim Health Care Institute. “Teens underestimate the number of calories in their meals by as much as 34 percent, parents of school-age children by as much as 23 percent, and adults by as much as 20 percent.”

Heres' a chart from the BMJ that displays the results: 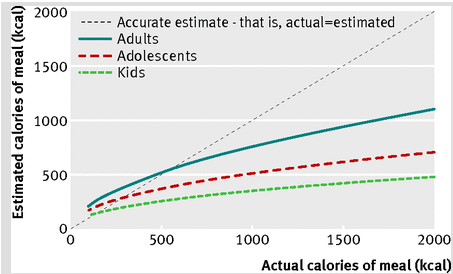 The report also found that patrons underestimated calories at Subway more than they did at other fast food chains such as McDonald's or Burger King. Interestingly enough, another recent study found that the food at McDonald's and Subway can be equally bad for teens.