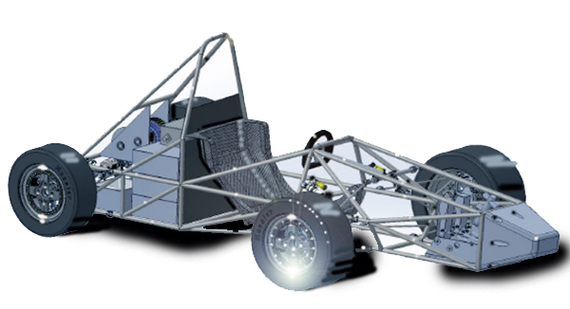 The world of transportation is now experiencing a renaissance as gas-guzzling vehicles are supplanted with alternative fuel sources. One way of accelerating the development of breakthrough innovations is by experimenting with and testing new technologies in racing.

California Institute of Technology, the world's leading research university, is now entering the Formula SAE Electric, leveraging its superiority in designing algorithms to improve simulations and vehicle control. However, the road to racing in 2016 may be paved with challenges quite similar to those of a design driven startup.

Along with developing technology and implementing this into new product development, they must build an antifragile organization that can learn and grow from planned and random experiences. To make it even more interesting, all of this must be done on a shoestring budget and truncated schedule.

The goal is to win the competition, however also to push the boundary of the next generation of vehicles, while building dynamic capabilities along the way.

When beginning this project, they knew that they were at a disadvantage as a first year team, competing against schools with 20+ years of history. However, that did not curb the progress or enthusiasm of the students. As the project entered the 2015-2016 school year, they had a 10x growth in membership after a successful first year prototype drew much attention while making laps around campus.

The large growth of membership was one of the initial unexpected challenges -- that of keeping a group of seventy students organized and focused on a common vision. They took the summer to get organized and created a student leadership group that now manages the project's divisions and makes decisions about major tradeoffs, to balance the performance, cost, and robustness of the vehicle.

To keep the project going with a mix of students from disparate backgrounds in engineering projects, they divided the team into four divisions: Mechanical, Energetics, Operations and Business.

This agile organizational structure has worked extremely well for them thus far. They have been able to pivot quickly after feedback from design reviews with local experts.

Originally, they had tried to define the responsibilities of every student to a T. However, it soon became evident that this was not effectively utilizing the vast amount of talent in the team. Since then, they have changed their structure into a more horizontal one, opening up all communication channels among students to create a much more fluid structure.

Increased independence, required weekly deliverables to keep the project on track and the development of stoplight architecture (red, yellow, green), to communicate the group's progress during their weekly scheduled meetings. The team now views their organizational structure as their greatest advantage.

One of the most challenging parts of building the organization has been defining the business team. Most other competing universities have dedicated business students pursuing fundraising opportunities and creating a business plan for the project, whereas, the Caltech team consists mostly of technically oriented students.

However, just as with the technical divisions, they established an effective structure after failing fast and smart. They have since been able to utilize the technical background of their students to more effectively communicate with local companies and sponsors, receiving an outpouring of support and help from those willing to give time and money to see Caltech succeed.

With this effective organization in place, they are now making great progress this winter in the prototyping and manufacturing phase of the project. With less than four months until the competition's deadline, they are extremely excited to make a statement as a first year team competing with seasoned veterans.

Special thanks to Robert Anderson for researching and co-writing this article.