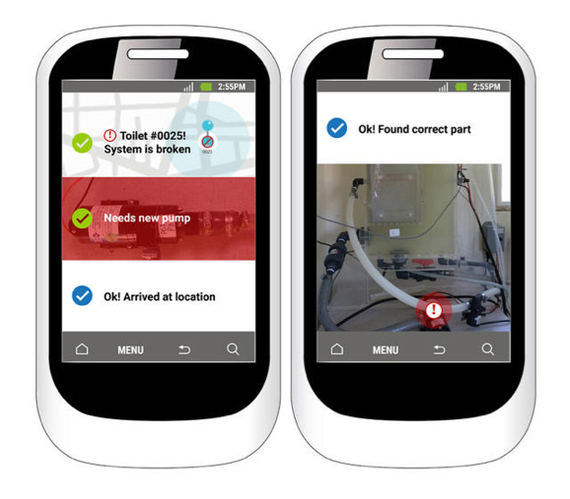 Our world, from our cars to our phones now communicates and the Internet of Things (IoT) ensures that we are safe and healthy. So, how is it the toilet has not changed in over one hundred years?

Most progress may come from the developed world, however, many innovations spring from solving challenges in the developing world, as well. The budget constraints encountered there help reframe the opportunity and seem to inspire the best in engineers and designers. One of these recent innovations, called the Toilet Of The Future, was built so that anyone can repair it with their mobile phone and a screwdriver.

Projects in the developing world encounter challenges when the projects are concluded and the development team has left. Installations work for a while but, when they break down, nobody is left on site that is responsible for or knows how to repair the solar panel; pump or whatever else was installed.

A team of Caltech students experienced this first hand on the Gates Foundation's Re-invent the Toilet Challenge. Having won the contest and delivered a breakthrough solution, the initial success turned into a maintenance nightmare.

In 2014 and 2015, on five separate occasions during the first two years of field- testing, several members of the Caltech Toilet Team purchased thousand dollar plane tickets to travel to India to fix problems with the system like replacing a pump, replacing a pipe, or installing a straining grate. In each case, the spare parts were on hand and the local technicians were perfectly able to physically replace the part.

Yet, on each occasion, the graduate students came back frustrated. Why were the local technicians unable to do the job if they had all the skills they needed to do so?

Of course this was an oversight, for if the local technicians had all the skills needed, they would have been able to quickly and accurately gather the data about the system needed to diagnose the problem and make a given repair. However, the local technicians were not the PhD Students and Post Docs who had worked to develop this system, and, therefore, diagnosing the system might be comparable to most people in the developed world trying to figure out the problem when their refrigerator breaks down. Even though the system is relatively simple, the accuracy would not be sufficient to solve the issue.

With 4.4 billion people around the world lacking access to adequate sanitation and a need for as many as 110,000,000 units, it is unrealistic to train enough treatment system mechanics to maintain systems and provide a sustainable service. However, with ninety-eight mobile phone subscriptions per one hundred people in the world, we clearly saw a sustainable solution to the maintenance problem.

Since then, we have been working on configuring inexpensive sensors to gather the data necessary to diagnose a break in the system. Once diagnosis is achieved, mobile phones can be used to alert users of other toilets nearby for them to use and then to provide step-by-step maintenance instructions to an operator. Which is exactly the type of help that the Caltech team would give to the local technicians on their very expensive maintenance visits. In this way, we moved past the maintenance hurdle that so many technologies face in the developing world and turned a fantastic wastewater treatment technology into a globally sustainable sanitation solution.

Soon, technologies that can manage one's utilities and maintenance may be able, at the same time, to provide health updates by monitoring one's stool using a smart watch.