It's a glorious sunny day here on the Greenland 'Riviera' in the depths of a February winter, the sky is a pale blue, there's hardly a wisp of cloud, and it's a bracing -8 Fahrenheit, that's -22.222 for those of the Celsius persuasion. Brrrrr! 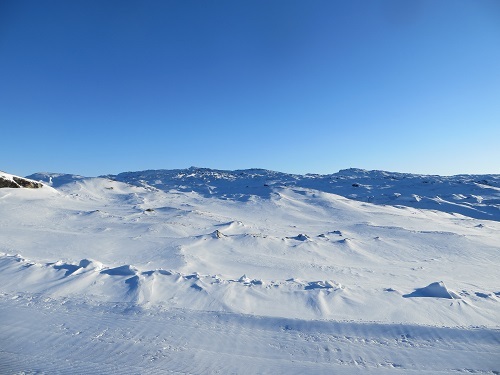 So it's time to get bundled up for a solo walkabouts through Ilulissat, Greenland's third largest town nearly 200 miles above the Arctic Circle, and on to a boardwalk that leads after a mile or so to the famed UNESCO World Heritage Site Ice Fjord, where Sermeq Kujalleq, one of the fastest and most active glaciers in the world, moves over 130 feet a day and calves 11 cubic miles of icebergs a year. 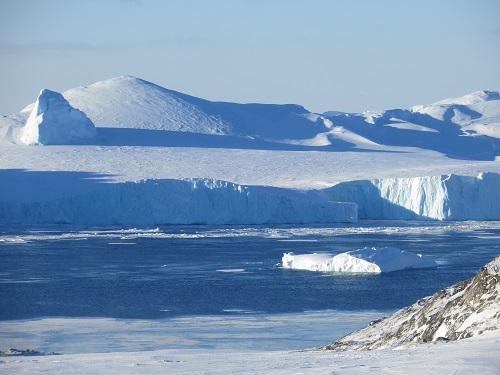 I get up the hill out of town alright, but how is it that that when there's a fork in the track and it's quite obvious which is the right one to take, I always take the wrong one - in this instance ending up in the town's snow-bound cemetery? 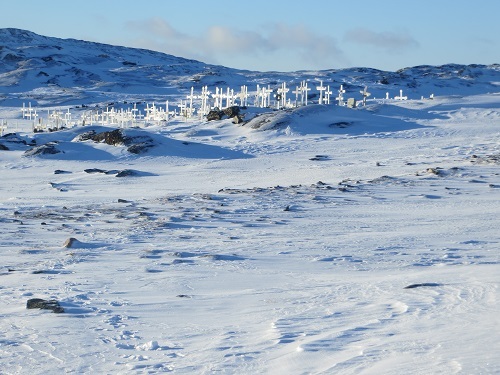 Back at the fork I see the trail of compacted snow and ice that occasionally shows the boards of a boardwalk. I even come across that group of Singaporean tourists all kitted up to land on the moon, yet savvy enough not to land up in the cemetery. 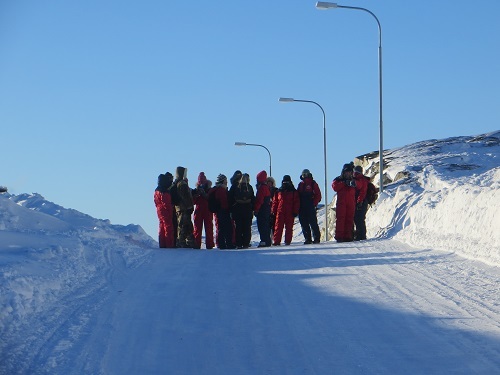 Ready to land on moon

The scenery is spectacular with the craggy cleft of the ice fjord below and blindingly white snowy peaks rising on the opposite side. Even when the boards disappear beneath the ice and snow, you can still make your way without difficulty thanks to snowy footprints, until... 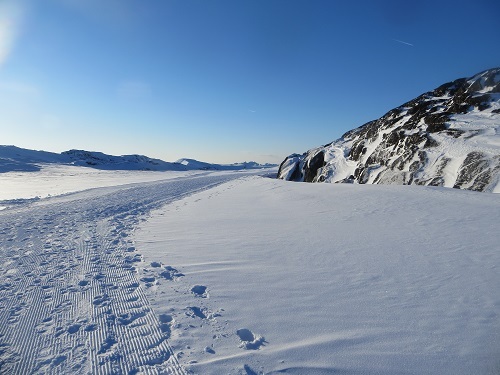 The trail to the Ice Fjord 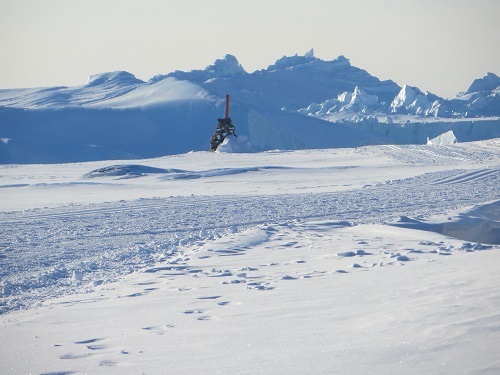 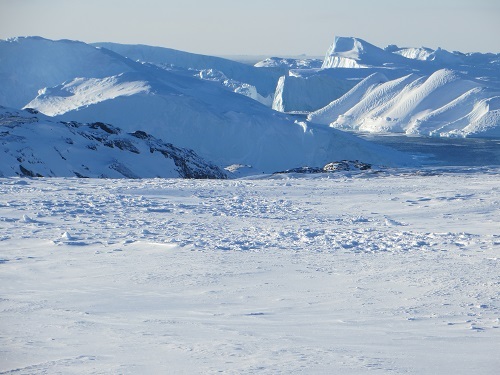 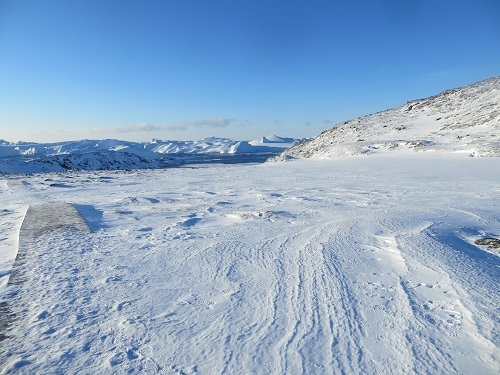 Yet another
Now how is it when you can either go up or down, and it's quite obvious that you should go down since there are people way below on the shore of the fjord, that I find myself clambering up a huge steep snowbank until I can neither go on any further nor turn back down again? 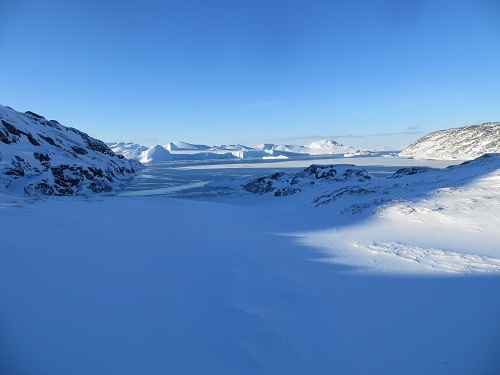 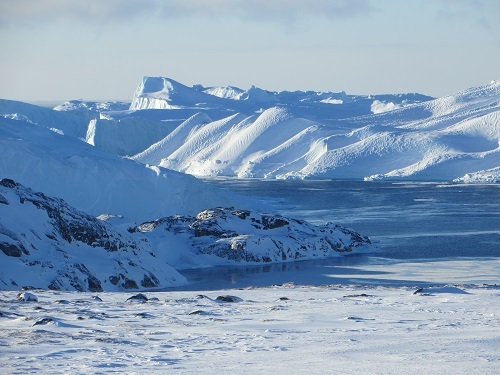 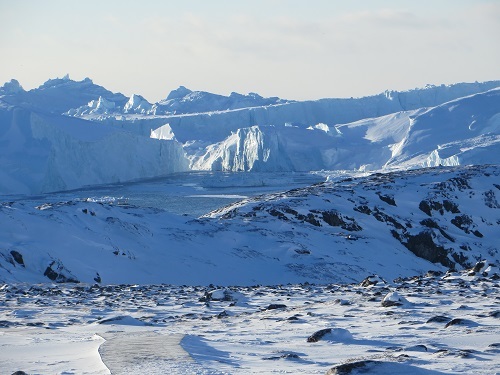 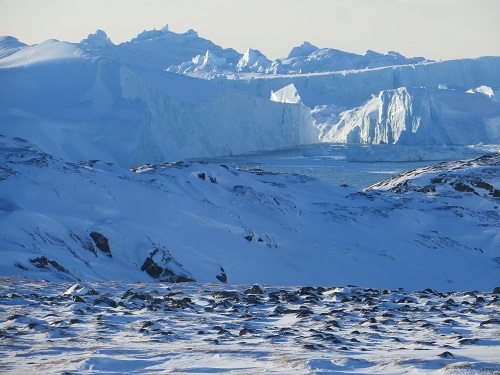 I'm well and truly stuck, on the brink of Armageddon - but I do see the boardwalk re-emerging again way below me to the right. Amazingly, without falling flat on my face or arse even once, I negotiate with the snowbank, and it lets me make it back down. 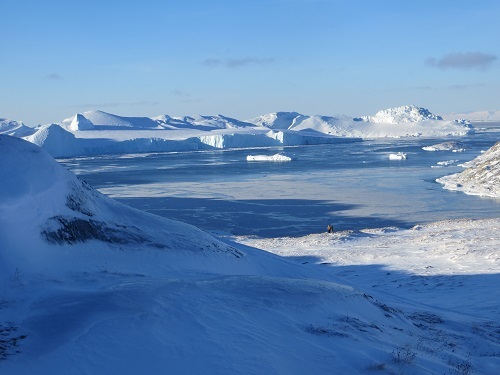 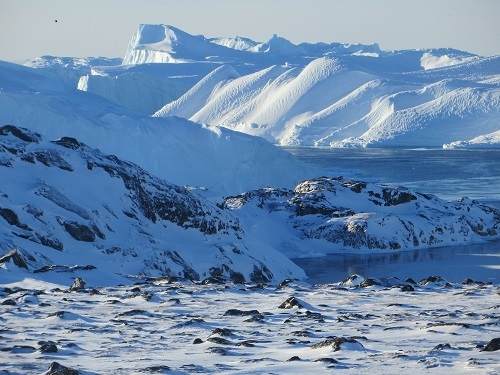 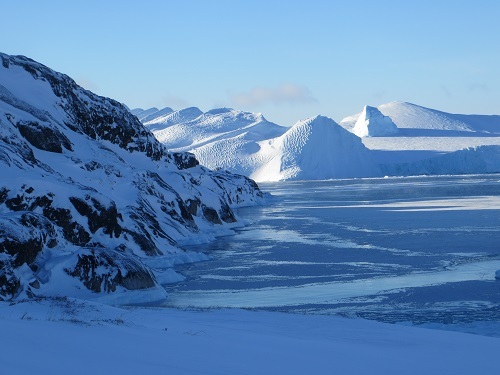 Fortunately it's in English and Danish, too: EXTREME DANGER! Do not walk on the beach! Death or serious injury might occur. Risk of sudden tsunami waves, caused by calving icebergs. 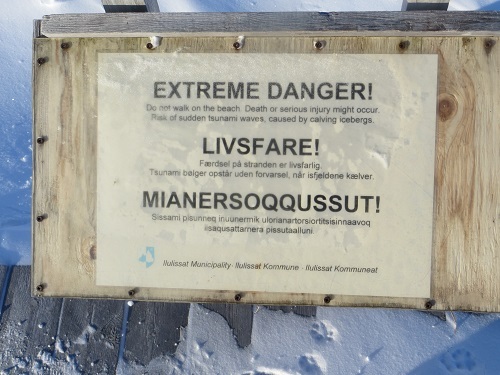 The walk is also on the tourist package so I do it again the following day 'en groupe' and with the guide. But now it is overcast and blowing, -18.4 F., or -28 C., with a wind chill factor of -40 in both measures.

Atop a viewing platform looking out towards the Ice Fjord, it's about -58 F, or -50 C, when you factor in the wind chill, and the crags and peaks now loom eerily through a yellowish-grey haze. But I do learn something from the guide: what I took yesterday for massive ice and snow covered mountains are in fact solid snow-covered icebergs. 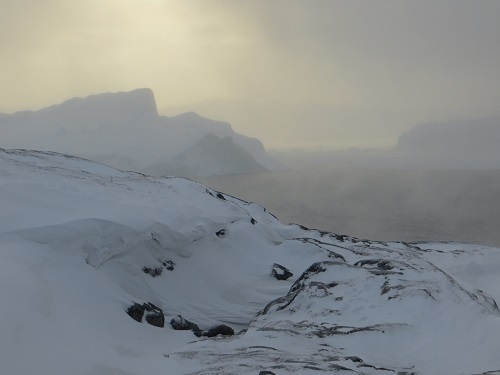 Back in the tourist bus my eyebrows thaw, the icicles on my eyelashes melt, my nose defrosts - and I hope I don't look like the others coming on board. The snot from their noses has frozen into mini-icebergs calving from their nostrils, and one German gent has a mini-Greenland icecap atop his upper lip.

You can get even closer and more personal with the icebergs, courtesy of an afternoon's boating into the Ice Fjord and Disko Bay. They are amazing. Some have a bluish hue near the water level. Those in the mouth of the fjord are gi-normous, pinnacles and massive pointed pyramids soaring above us. They go on for miles and miles. 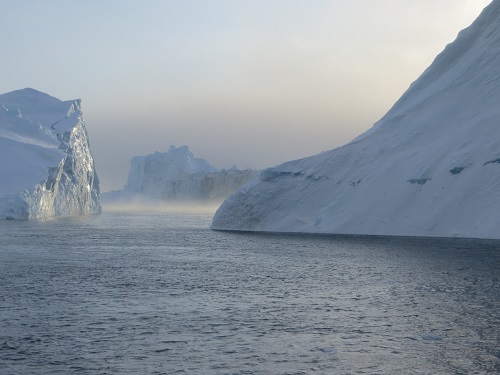 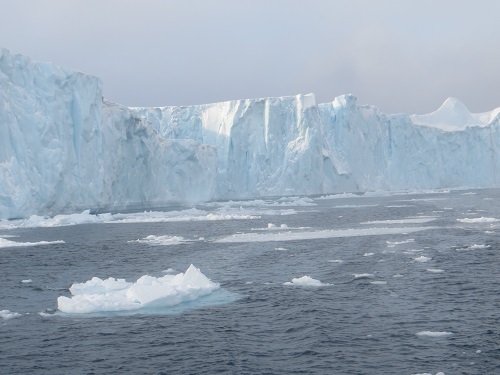 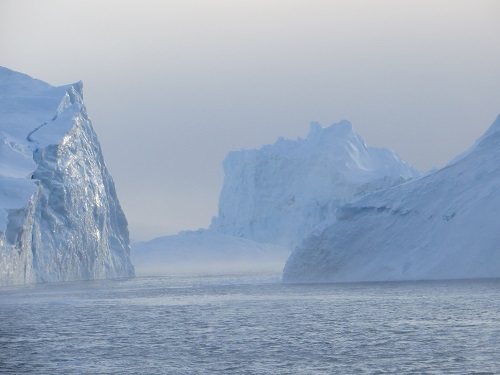 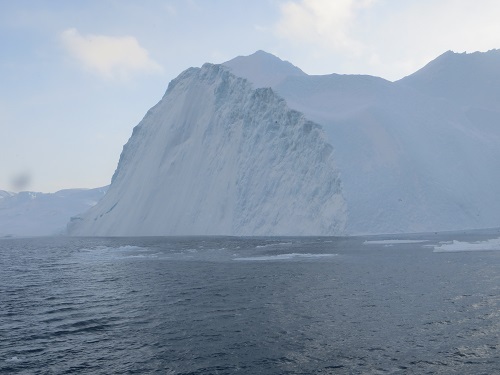 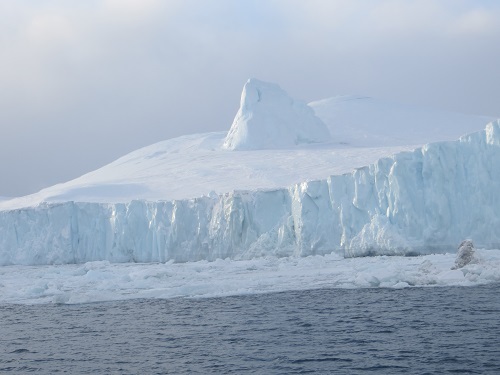 And another
It becomes easier to understand the 'Extreme Danger' warning about tsunamis when they calve.

Out in Disko Bay the icebergs are more manageable and we can really get down and dirty with them. The captain brings the prow smack up against the side of one and everybody's standing there, holding on to ice crags, taking selfies - and looking particularly stupid into the bargain. 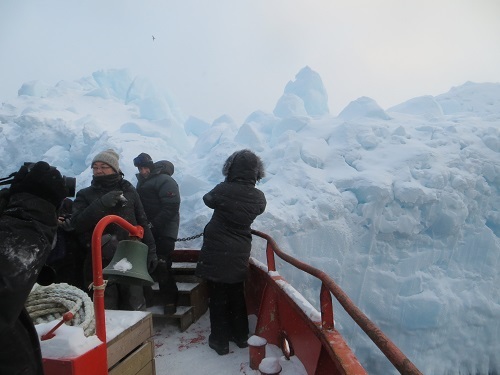 Close and personal with an iceberg

There's a stupendous crunch and a whole side of the iceberg collapses into the sea just a few feet from the port side. Had the captain stopped there instead of here we'd be filleted and frozen by now.

It's brutally cold, but the boat has a heated cabin and we can come in to thaw out, before nipping out again for some more photographic high jinks. 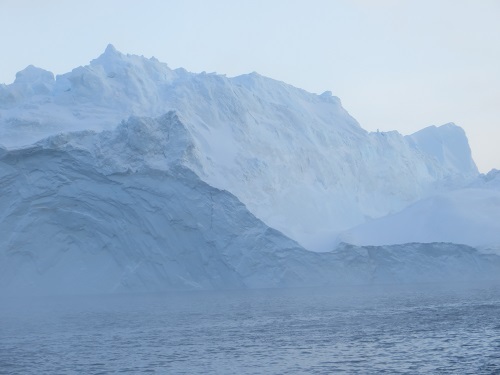 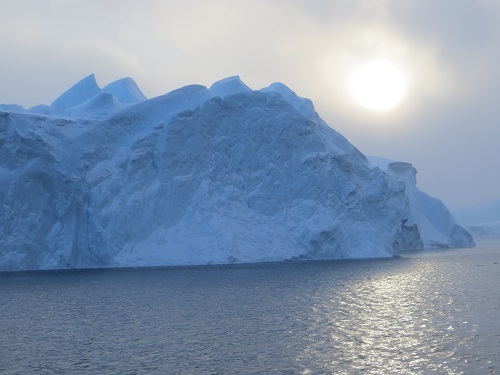 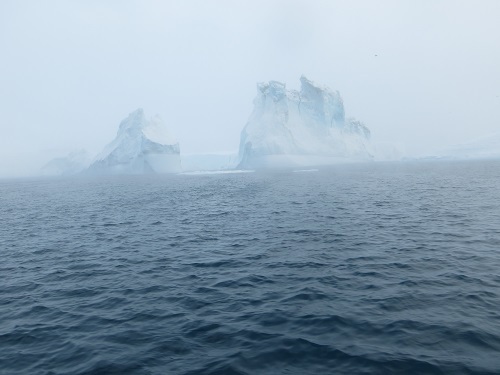 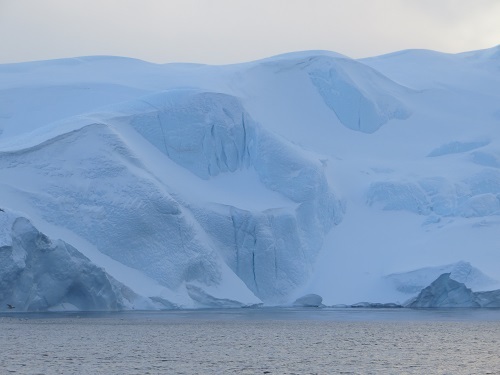 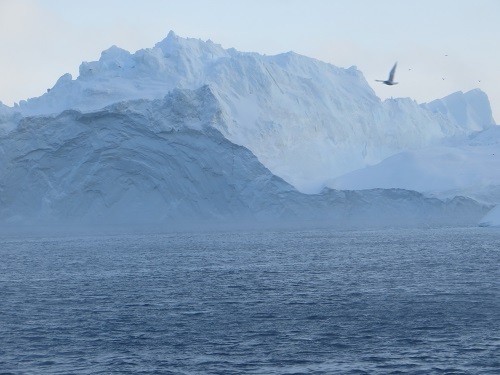