Ever since Angelina Jolie swung through temple ruins in Cambodia as Lara Croft, Tomb Raider, the place has been crawling with tourists. Siem Reap, the town closest to a vast complex of ancient Hindu/Buddhist Temples, is in fact a tourist bubble (with 127 hotels from hostel to ultra luxe) within an otherwise fearful, unkempt country. Pockets of opulence exist, but visitors should not turn a blind eye to reality in Cambodia. A good tour guide - or good itinerary - will show you everything. 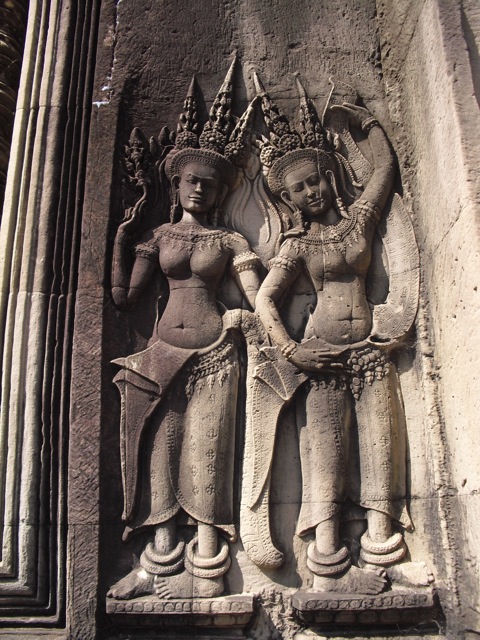 1. Sunrise at Angkor Wat, Siem Reap Cambodia; Everyone does it; you'd be amazed by how many tourists show up at 5:30am. You just have to know how to beat the crowds and where to sit for optimal unobstructed viewing. (Hint - get off the main walkway and sit on the steps of the outpost buildings). Angkor Wat, built over the course of thirty years in the 1100's as a home for King Suryavarman II after his death, was unknown and undiscovered until France colonized Cambodia in the mid 1800's. What they uncovered in the midst of the jungle, both overgrown and somewhat well-preserved, is now considered one of the Wonders of the World. A good tour guide will direct you to the magnificent bas-relief walls depicting many levels of heaven and hell - some quite gruesome - and to some of the 1,800 seductive Dancing Maidens carvings. One warning; beware of monkeys. They swarm the place and will grab stuff out of your hands (a few were enjoying tearing up a guidebook when we visited), and come after you if you dis them. 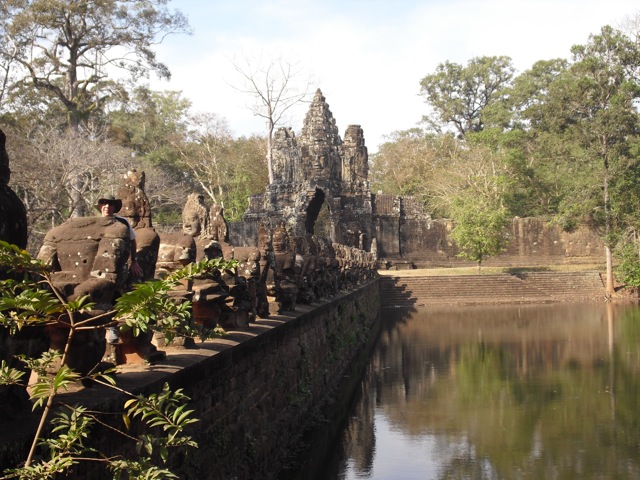 2. Angkor Thom, Siem Reap, Cambodia. Locals pronounce this temple "Uncle Tom," and though it hasn't been restored to the degree of Angkor Wat, it does have several interesting elements. Angkor Thom's defining feature is an entry bridge flanked by 54 stone warriors who seem to be playing tug-of-war with the sacred Naga Snake. Most of the warriors' heads are missing (pop-up head, great photo op!), taken by looters after the Vietnam War. Bas reliefs here have less to do with the afterlife and more of the day to day aspect of this one; men playing chess, women cooking and having babies, a "Monkey 69" (use your imagination). "That would have never been on my father's Metropolitan Museum of Art Tour," quipped a friend. 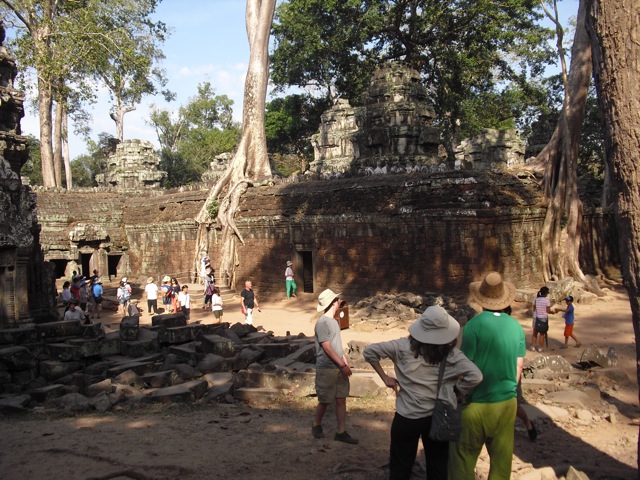 3. Ta Prohm, Siem Reap, Cambodia; The "Tomb Raider" Temple, which was left as found - crumbling walls intertwined with tree roots - to show tourists the state in which the rest of the surrounding temples were discovered. 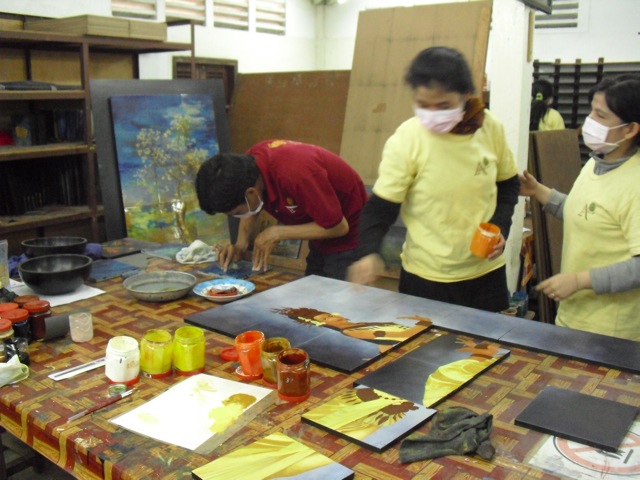 4. Artisans Angkor, Siem Reap, Cambodia; watch artisans at work in this trade school for disadvantaged Cambodians, then shop in the colorful store where authentic goods fly off the shelves. We walked out with several ornamental silver-plate boxes ($17 each) and vividly colored silk scarves ($22). You'll find everything from fashion to furniture and not one bit of junk. 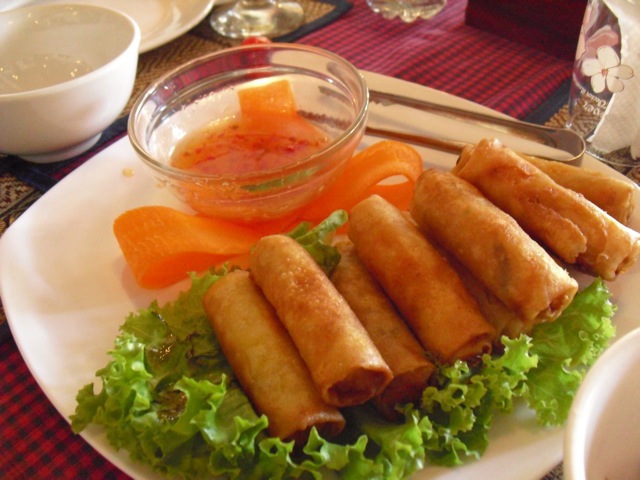 5. Have lunch at New Hope Restaurant, Siem Reap. You will not only enjoy one of the best meals you'll have in town, but you'll feel good to know that this is a trade school for former sex workers, an elementary school for at risk kids and a local free medical clinic. The former head chef of a Siem Reap 5 star hotel runs the training restaurant,and her expertise shows. Plan to stay for a site tour and to meet the kids. They are so smart and engaging, you just want them to have a better life. 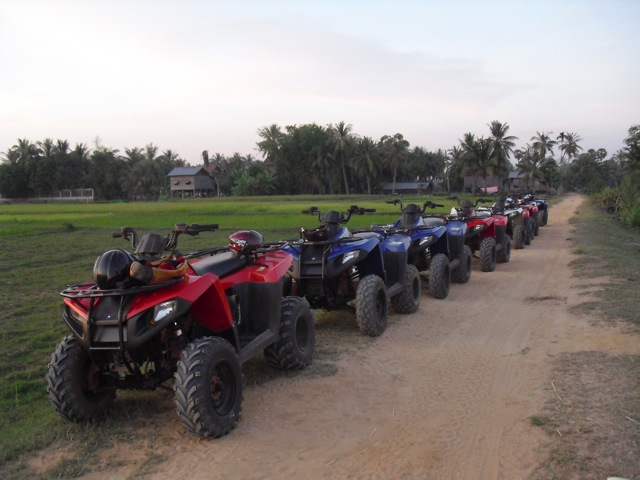 6. Sunset Tour, Quad Adventures Cambodia, Siem Reap; I was instructed to keep my hands on the handlebars of my ATV at all times, as the rural dirt roads on the outskirts of Siem Reap are rutted and mogul-like, but what I really wanted to do was High Five the smiling village kids lined up, hands out. (I didn't). I nearly hit a cow and the ubiquitous locals on bikes before stopping for one of the most stunning scenes that has ever graced my eyes; sunset in the rice-paddies. Eight of us on ATV's with four guides (on their own rides) pulled over on a dirt road that bisected rice fields, green and fertile, with the glowing yellow-orange ball descending inch by inch, casting the surrounding landscape in transcendent light. We took pictures until the last sliver of sun disappeared from the horizon then zoomed and dipped back on dusty, sandy roads. Our black clothes were tan by the time we returned. Book way in advance -- this is a very popular tour.

7. Take a Tuk-Tuk to Downtown Siem Reap; This nimble mode of transportation - essentially a 4 person carriage pulled by motorcycle - congests every alley, lane and road in Siem Reap. It takes just a few minutes (and about $2) to get to.....

8. Pub Street and Siem Reap Night Market, an area with the vibe of New Orleans at Mardi Gras. There are plenty of restaurants and "spas". We dined at The Red Piano, beginning with the lip-smacking cocktail, "Tomb Raider," and then stuck our feet in one of the many "fish pedicure" tanks out on the thrumming streets. If you are ticklish or in any way squeamish about fish, don't. You'll find deals in the Night Market - mostly knock-off Ray Bans ($5), hastily produced oil paintings ($15) and drawstring pants du jour (3 for $10). 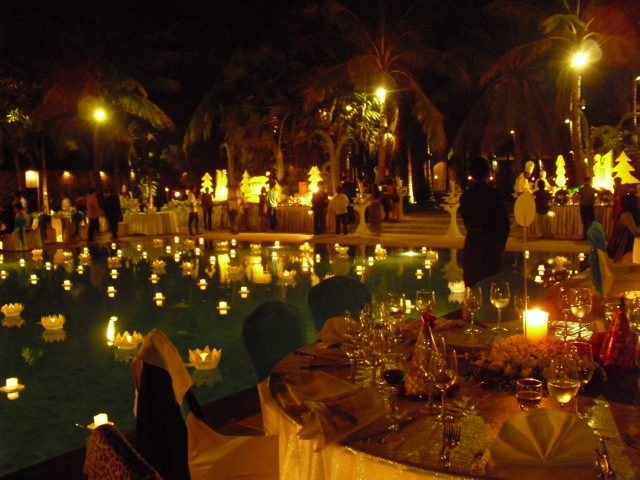 9. Stay at the newly renovated Lotus Blanc, Siem Reap; I was not sponsored, paid, or asked to recommend this place in any way. As a tourist, I just had a great experience there and wanted to pass it on. This is not a Raffles or Four Seasons, FYI. But as a 4-star hotel with rates as low as $75/night (booking.com), and an extremely high and friendly standard of service, I was duly impressed. Staff are overeager to please, rooms are modern-chic and comfortable, and the pool is so phenomenal, you will want to plan your day around a dip or two. At this point, however, I can't recommend the restaurant for dinner. Grab a tuk-tuk outside and head into town for that. 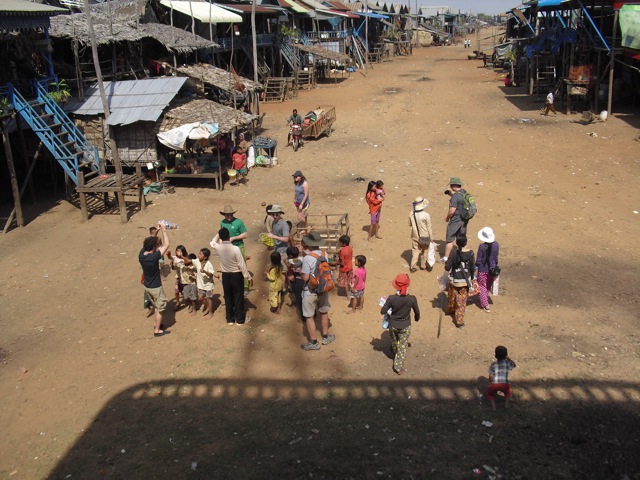 10. Tonle Sap Lake; Take A Boat to the Floating Villages; This is an eye-opening look at the abject poverty and subsistence living in the primitive fishing villages of Cambodia. You'll pass shacks on stilts (in the rainy season, the lake waters rise nearly to front doors), children paddling with babies in canoes, and livestock in floating pens. Be sure to take lots of fresh fruit or school supplies. When you stop at the Temple (an oasis of flame-colored serenity in the midst of the squalor), barefoot kids will start pouring in from all directions. Enterprising women selling 20-pk bags of chips for $2 might soon approach you. Buy as many as you can and give them out, too. Seeing the way people live here, it is no surprise that life expectancy in Cambodia is 58. 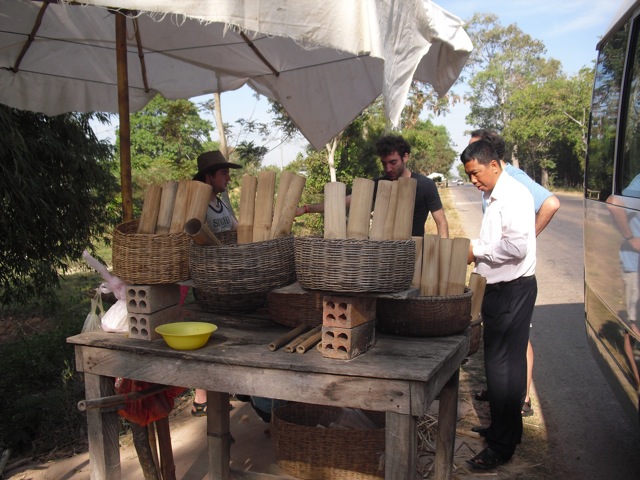 11. Drive 6 hours on Route 6 from Siem Reap to Phnom Penh. This mostly paved highway cuts thru authentic rural Cambodia. You'll see shacks with grass-grown driveways just big enough for a bicycle or scooter, sticky-rice in bamboo "snack" stands by the dozen. (Get one; it's delish). Roadside stands also hawk urine-yellow petrol in glass bottles for the motorbike on its last fumes. You'll also see (not necessarily in this order); straw-hat topped workers in the rice paddies, stubborn road-blocking cows, ox-driven carts laden with hay, kids on bikes dressed in white shirts black skirts/pants heading to or from school, marts, homes and land strewn with garbage, French Colonial towns gone to seed, open trucks stacked with mongo rice bags, and of course, the famous fried spiders. 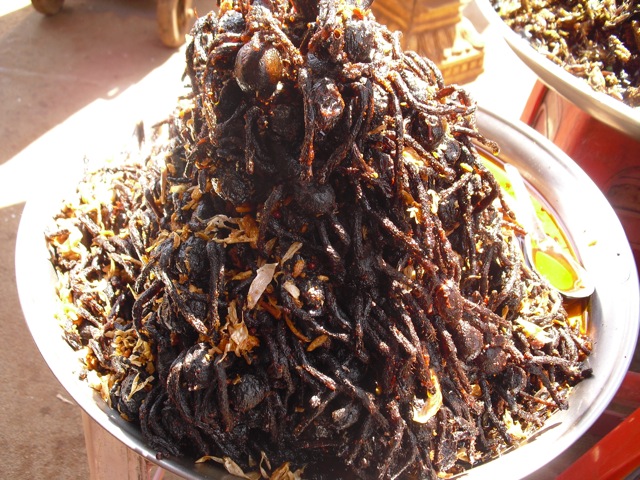 12. Speaking of which, Eat A Spider (or watch someone else do it); there's a stop along Route 6 Cambodia that features platters of fried tarantulas, crickets and birds. There are also bananas and mangos for the non insect eater. 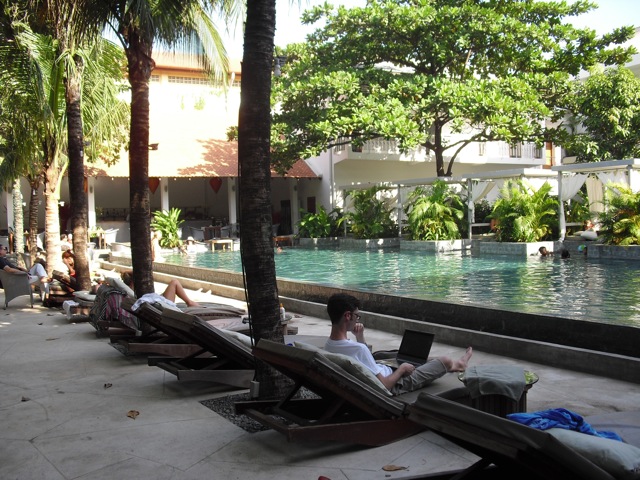 13. Stay at The Plantation, Phnom Penh; a sanctuary from the grime, crime and chaos of Phnom Penh. The staff is a bit aloof, but you'll forgive them as you head to one of two pools, lie down on a cabana bed or drink a cocktail before heading upstairs to the great restaurant. Platform four-poster beds in contemporary zen-calm rooms complete the deception that you are actually staying in a wealthy resort town. Walk a few paces and it couldn't be further from the truth. If you're craving some site-seeing downtime, take advantage of it here. 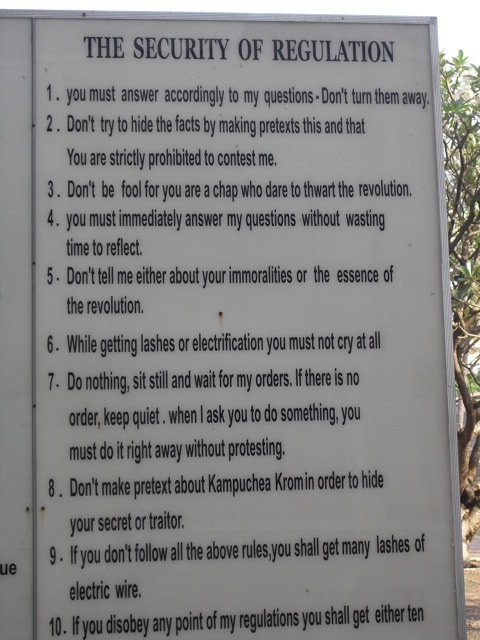 14. S-21 aka The Tuol Sleng Genocide Museum, Phnom Penh; Pol Pot, the Hitler of Cambodia, and his minions, the Khomer Rouge were responsible for the deaths of nearly three million Cambodians between 1975 and 1979. Once a peaceful High School, S-21, became a torture-interrogation center from which just a handful survived. Intellectuals, clergy, doctors, professors were rounded up and shackled, electrified, dismembered and beaten to death. Those who survived were taken to the killing fields for final extermination. S-21 is now Tuol Sleng Genocide Museum, in memory of those tortured here. It is a difficult place to visit, but, like other Holocaust Museums one must learn so that it never happens again. 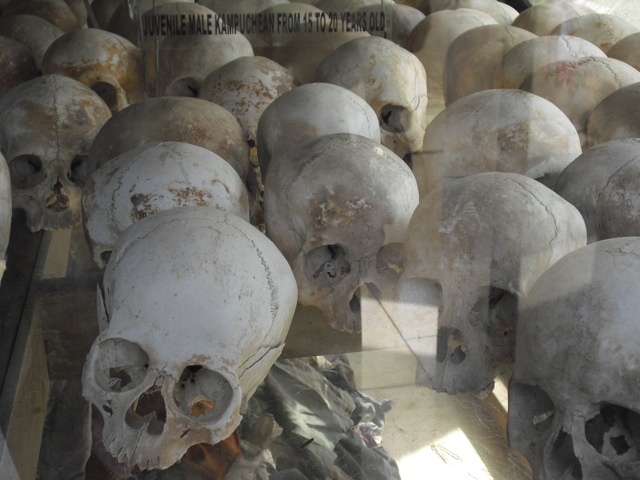 15. The Killing Fields, 15 kilometers from Phnom Penh, Cambodia. It's a monument unlike any in the world - crammed with skulls and other bones unearthed from just one of the hundreds of Cambodian Killing Fields. The government chose to leave most mass graves alone, so this is both cemetery and hallowed ground.

You can probably put together a whole trip based on this list, but the most economical and efficient way to do so is through a company like G-Adventures or Discovery Channel Adventures that can pull together a seamless itinerary with guides, hotel bookings and activities tailored to your every whim for much less than you'd expect.