The writing on clothing labels is generally kept pretty pithy, because unless customers are shopping in Milan, they’re likely not all that interested in the details of their garments’ origins.

But, in reality, just as important as fit and comfort is where clothes are made and how the people who produced them were treated in the process. That’s why advocacy group Canadian Fair Trade Network recently unveiled a powerful campaign that outlines on actual clothing labels the types of horrors sweatshop workers in Cambodia, Sierra Leone and Bangladesh face.

The stories represent what transpires at three levels of production -- harvesting, textile production and garment manufacturing.

A bright yellow sweater, for example, describes the devastating daily schedule of a child laborer in Cambodia. 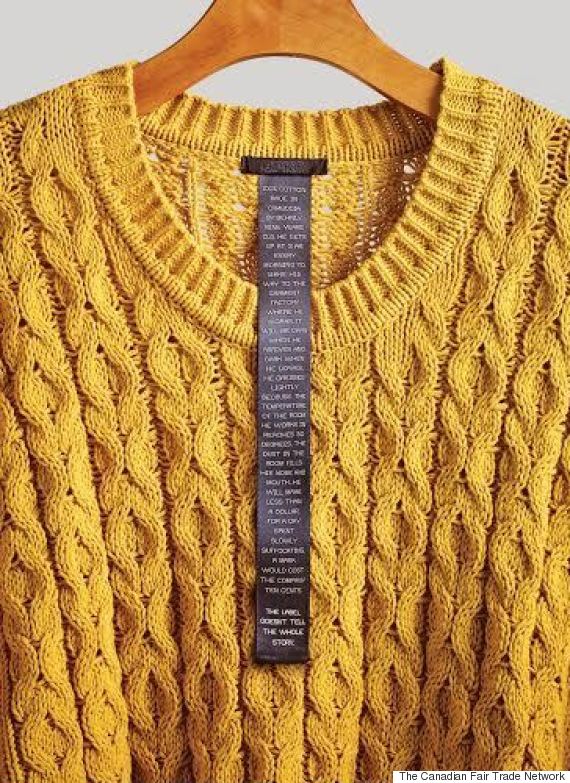 The label reads: 100% cotton. Made in Cambodia by Behnly, 9 years old. He gets up at 5:00 am every morning to make his way to the garment factory where he works. It will be dark when he arrives and dark when he leaves. He dresses lightly because the temperature in the room he works reaches 30 degrees. The dust in the room fills his nose and mouth. He will make less than a dollar, for a day spent slowly suffocating. A mask would cost the company ten cents.

In 2012, Cambodia shipped more than $4 billion worth of products to the United States and Europe, making the garment industry its most lucrative export. Yet the industry’s workers typically toil six days a week and make just $100 a month, barely enough to cover their basic expenses, according to advocacy group Clean Clothes.

Some major European companies, like H&M, have heeded to mounting pressure and recently pledged to improve meager wages for factory workers.

H&M committed to developing pay structures that would enable a fair living wage in 750 factories it works with, including those in Cambodia and Bangladesh, by 2018.

Often, however, it isn’t just the meager wages that concern workers most. It’s the fact that they face unsafe working conditions that could cost them their lives, as the label on a sleek suit jacket demonstrates. 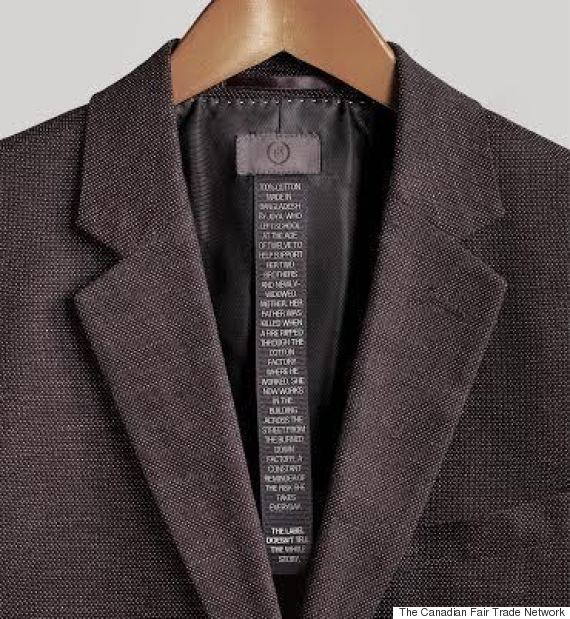 The label reads: 100% cotton. Made in Bangladesh by Joya who left school at the age of 12 to help support her two brothers and newly widowed mother. Her father was killed when a fire ripped through the cotton factory where he works. She now works in the building across the street from the burned down factory. A constant reminder of the risk she takes every day.

The hazardous conditions workers in Bangladesh are subjected to made international headlines in 2012 when 112 laborers died in the country’s worst-ever factory fire. Walmart, Disney and Sears were among the U.S. retailers who imported clothing from the devastated factory.

Perhaps what was most distressing though, was that Walmart and Gap rejected a proposed plan a year earlier that would’ve required them to pay their suppliers more in order to improve safety conditions, Bloomberg reported.

In 2013, some major U.S. and European retailers, including H&M, signed an international five-year accord that demanded independent safety inspections of factories in Bangladesh and that participating companies pay up to $500,000 a year for safety improvements. Walmart declined to get involved and said it was forming its own safety plan.

To help customers support companies that partake in fair trade practices, the Canadian Fair Trade Network offers customers an extensive shopping guide. It lists Canadian companies that partake in fair-trade practices and also enables shoppers to search by product to find manufacturers they can trust. To urge companies to improve wages for factory workers in Cambodia, Clean Clothes launched a petition to urge H&M to do even more to protect workers there.

Find out more about the campaign and how you can get involved here.