While modern camels are native to desert regions, new research suggests their prehistoric ancestors thrived as far north as Canada's High Arctic, where the fossils of oversized, camel-like creatures were uncovered recently. This is the closest to the North Pole such remains have ever been found and is the first evidence that these large, prehistoric camels roamed the Arctic region 3.5 million years ago.

Discovered on Ellesmere Island in northern Canada, the fossils indicate that these animals were at least 30 percent larger than camels living today. Based on the height of a typical Arabian camel, the prehistoric mammals likely stood 9 feet tall or taller.

The research samples, 30 pieces of fossilized bone from the prehistoric creature's tibia, were found about 745 miles north of where North American camels were previously believed to have originated.

Lead study author Dr. Natalia Rybczynski, a research scientist at the Canadian Museum of Nature, explained the findings in a statement released by the museum:

We now have a new fossil record to better understand camel evolution, since our research shows that the Paracamelus lineage inhabited northern North America for millions of years, and the simplest explanation for this pattern would be that Paracamelus originated there. ... So perhaps some specializations seen in modern camels, such as their wide flat feet, large eyes and humps for fat may be adaptations derived from living in a polar environment.

The research also suggests that these prehistoric animals lived during a period of global warming, when the earth's temperature was 3.5 degrees to 6 degrees Fahrenheit warmer than it is today, "which is what we expect our climate to reach in the future," Rybczynski remarked, according to Planet Earth Online.

The breakthrough came from Dr. Mike Buckley, a NERC research fellow at Manchester University. It uses the collagen in fossils to build a unique profile of the proteins in the bone. This fingerprint means even small fragments of bone whose DNA has long since decomposed can be labelled.

The study, "Mid-Pliocene Warm-Period Deposits in the High Arctic Yield Insight into Camel Evolution," was published online in Nature Communications on March 5.

Click through the gallery (below) to see photos of the camel fossil finds. 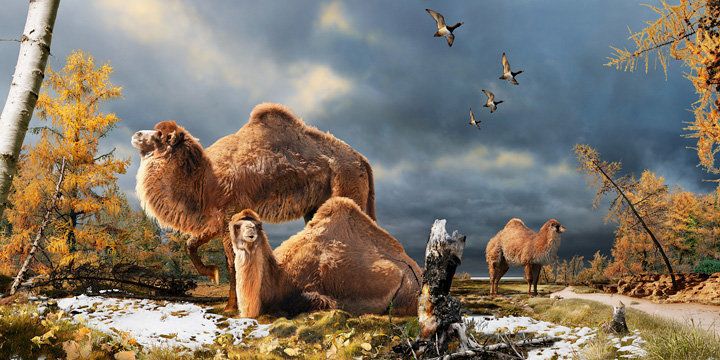 1 / 8
Illustration of the High Arctic camel on Ellesmere Island during the Pliocene warm period, about 3.5 million years ago. The camels lived in a boreal-type forest. The habitat includes larch trees and the depiction is based on records of plant fossils found at nearby fossil deposits.
Julius Csotonyi