The mischievous smorgasbord stands in stark contrast to the serious subject matter it depicts -- the drug trade and resulting violence that plague the artist's native Colombia. Yet the swarming murals capture an unusual and intriguing angle of the drug exchange, depicting a topsy-turvy world where criminals assuming aliases are, in a way, continuing that childish desire to play pretend. Allowing viewers to momentarily indulge in this fantasy, Restrepo then posits a simple reminder of the horror beneath. Any possible parallels aligning criminal pastimes and innocent play only make the reality of the violence all the more grotesque. 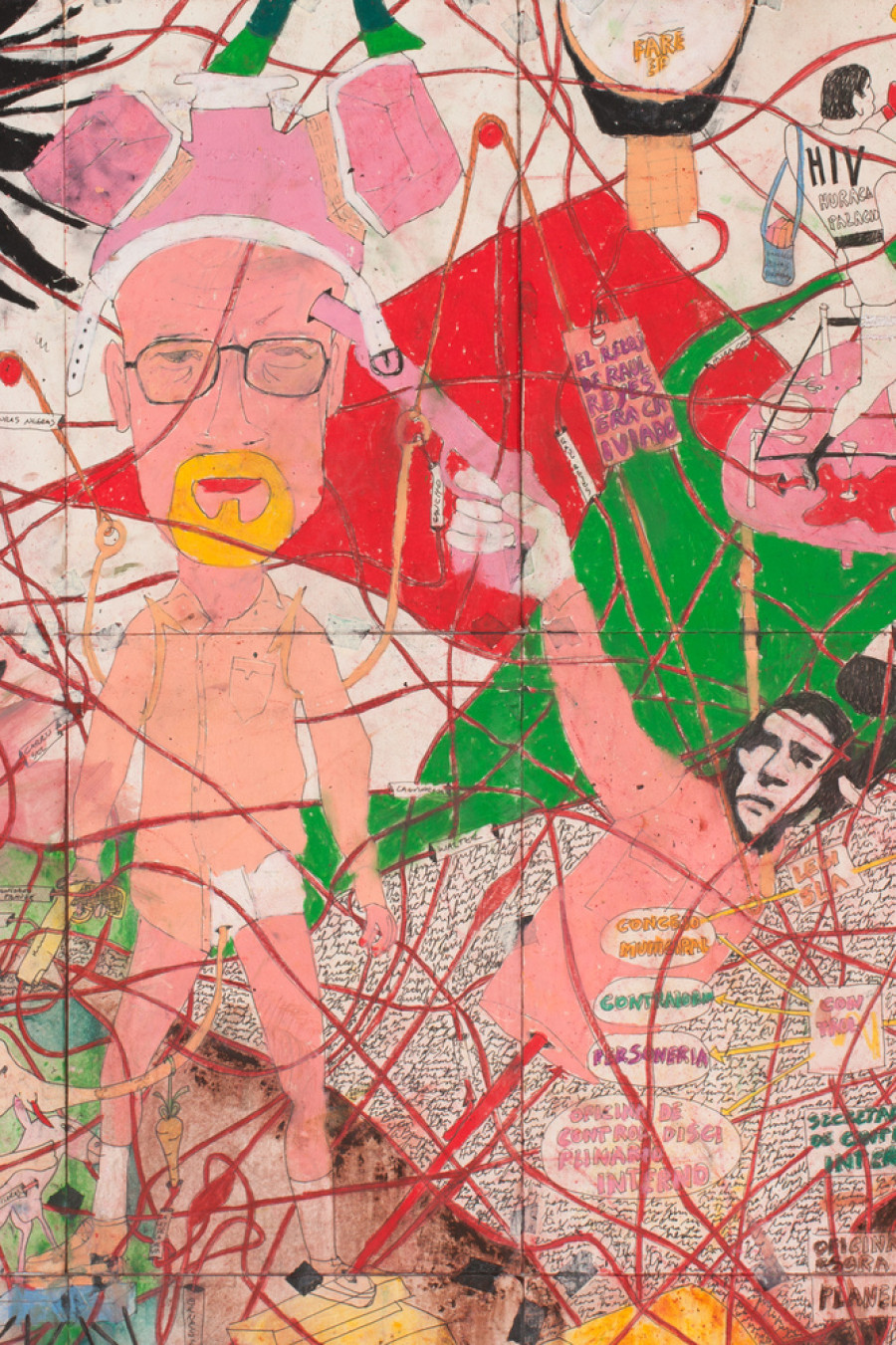 Restrepo, who was born in 1973, currently lives and works in Medellín, Colombia, where tales of drug trafficking commonly circulate through daily newspapers. The narco-traffickers assume aliases based on everything from comic book characters and celebrities to animals and commercial brands. Restrepo toys with the absurdity of these assumed identities, patching together a world in which these fake personas populate a deranged alternate universe. In the portrait series "Los Caprichos," Restrepo creates portraits of such uncanny alter-egos, ranging from Christopher Columbus to Rambo.

In "Salvador," a Dali lookalike with that iconic mustache rides atop a headless pig in a pink button-down and shorts. In his hand he cups an espresso cup that appears to be dripping with blood, as his eyes nervously dart to the side. For his unusual canvases, Restrepo used saliva to weaken sheets of paper. Various papers are then taped together to "heal the wounded paper," according to the gallery Steve Turner Contemporary. Yet alas, "the scars remain visible, yielding a devastated surface consisting of twelve sheets of paper barely held together, much like Colombian society." 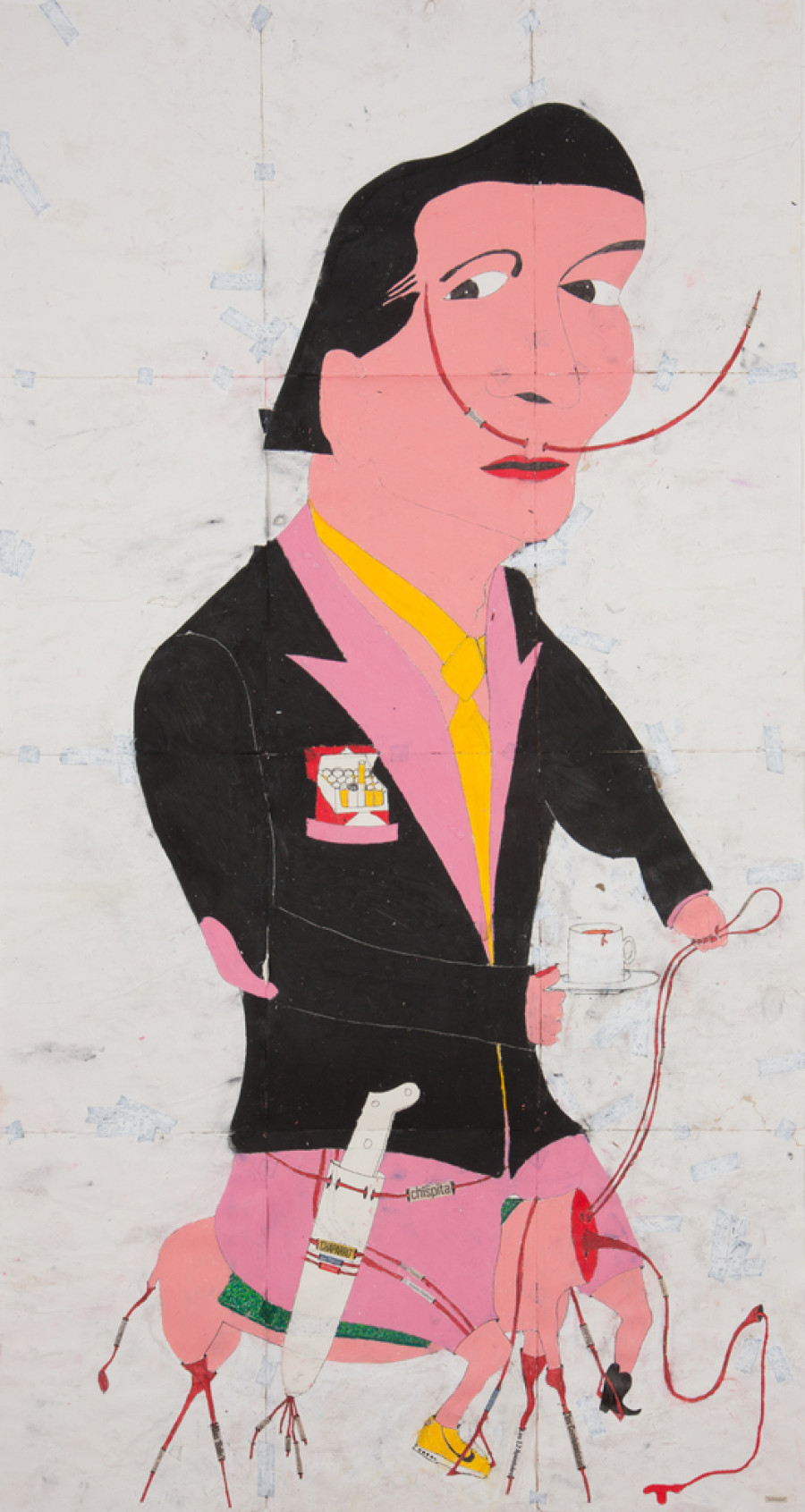 For his drawing series "A Land Reform," Restrepo creates three massive drawings, each containing a deranged map of cartoons, newspaper clippings, red hoses that resemble spurting veins and that wonderfully sickening shade of pink. With appearances by Walter White, Mr. Peanuts and Johnny Bravo among many, many, many more, the cacophonous display resembles a policeman's desperate attempt to map out a crime web -- if he'd gone mad in the process. For these works Restrepo ripped images from his drawing pad, attaching them with tape as if conducting a botched surgery. The veins that crawl throughout the canvas continue onto the backs of the works, which the viewer is encouraged to lift back and see, reflecting the never-ending complexity of the drug war.

Restrepo's exhibition, a contemporary take on Goya's 18th century etchings of corruption and absurdity, conjures a knotted display of pain and play. Even the pink hue that plagues the exhibition reflects the show's interplay between fantasy and reality. On the one hand, the hue radiates a nostalgic pastel glow reminiscent of a dollhouse or toy chest. On the other, the color resembles the warped palette of human flesh.