Pilgrimage has been a staple in our spiritual diet for eons. I speak of Homo Sapiens, who are made to wonder about life. As we wonder, so we wander. Both the fabled past and hoped-for future moved Chaucer's observation, "Thanne longen folk to go on pilgrimages," his Canterbury Tales stories told on the long walk from London to the burial place of St. Thomas à Becket.

To seek out shrines, temples of yore, burial grounds of saints, places made immortal by heroic vigil is to acknowledge life as a spiritual journey. Caught in the human condition of infinite desires meeting seemingly finite capacities, we want to know what saints know. The education that pilgrimages offer is far less factual than experiential. How does the divine intersect with this Earth on which we walk? Pilgrimage points to such crossroads residing in the geography of the heart. Pilgrims walk in search of redemption, faith, a new life, even transformation. So it was last fall that I walked the Camino de Santiago, northern Spain's 1000-year-old pilgrimage that drew even St. Francis to sacred relics in Santiago, joyous culmination for hundreds of thousands of pilgrims worldwide. Fruits of pilgrimage, while less specific than the now popular geo-caching, can be as lasting as they are mysterious. One gift of my Camino de Santiago was the seed-thought, "It's time for a Camino de Crestone" -- clear as the recognition of springtime. Landing in Denver from Madrid, I realized that the "Camino de Crestone" would be the world's first full interfaith pilgrimage.

I live in Crestone -- at the foot of sacred mountains. A solid look at our international village requires a double-take. This quaint mountain town even on first blush reveals a pronounced community to complement the obvious beauty of the Sangre de Cristo Mountains overlooking the San Luis Valley -- so gloriously Colorado.

Only a second gaze beholds the uniqueness of this hamlet at the dead-end of County Road-T. Within walking distance are stupas and zendos, ashrams, a Carmelite monastery, a Suft tekke, retreats and centers for sacred dance and voice, not to mention medicine wheels and sweat lodges, plus the labyrinth of Chartres in its exact dimensions. The holiest mountains in the world -- Crestone Peak (14294') to the Hopi and Mt. Blanca (14,345') to the Navajo -- overlook the Camino de Crestone. Here is a true place of power. One Native elder sighted as proof the heaven (wind) and earth (sand) merging in the Great Sand Dunes visible to the south.
That Crestone is a mecca of spiritual traditions gets exemplified in the Camino de Crestone's 26-mile circuit in which pilgrims visit 15 spiritual centers in a week's time. Along with audio-tour intervals, participants experience meditations, labyrinths, dharma talks, yoga of the voice, a shamanic journey, a sweat lodge, sacred dance, spiritual healings, plus presentations, fine food and meetings with adepts in many traditions. Experience (not dogma) is key.

I attended the 1993 Parliament of World Religions in Chicago; have friends who've prayed in a Jerusalem synagogue, church and mosque; and know Christian and Buddhist groups having met with Hopi elders. All such interfaith interaction and numerous interfaith organizations must be admirably saluted. However, so many pieces of the spiritual pie served as pilgrimage is new. Indeed, history is being made.

How delightful that humanity steps forward in a hamlet hours from any city of size, reminiscent of David defeating Goliath: unexpected victory over religious intolerance delivered by a slingshot town off most everyone's radar.

Religion, often draped in secrecy, is simply the urge to belong -- to the deepest, dearest, largest, most lasting context imaginable. Such belonging is the subtlest (therefore most powerful) desire in the human heart. Religions can be credited for most wars over untold centuries. Paradoxically, the very field used to justify so much carnage also unites the variety in our garden of 7-billion flowers. At least metaphorically, we all want to belong to Earth and Sun. Therefore, a pilgrimage that experientially presents the depth and beauty of the world's great faith traditions signifies humanity's readiness for unity to balance its obvious diversity -- ergo, uni-verse.

Pilgrimage is a kind of geo-caching. Searching for buried treasure outwardly mirrors questing for inner treasure -- the urge for pilgrimage. While several geo-caches are hidden near Crestone, pilgrimage seeks what's hidden within. Were the Camino de Crestone called "the world's first interfaith treasure hunt," likely larger audiences would respond, yet those imbibing this unique education will sneak into the history books.

Beginning this June, the great pilgrimages of the Earth -- in India, Japan, Spain, England -- will be joined by the world's first full interfaith pilgrimage. Without long or difficult terrains, virtually all comers are potential pilgrims.

Our globe needs inter-religious harmony, a goal not won via treaties or legislation. It's a face-to-face process:meeting people and leaders of other faiths.

Wouldn't it be grand to travel the world and spend time in this monastery, that mosque, this ashram and that temple? Minus many airfares, visas and language barriers, it's now possible. 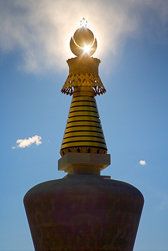