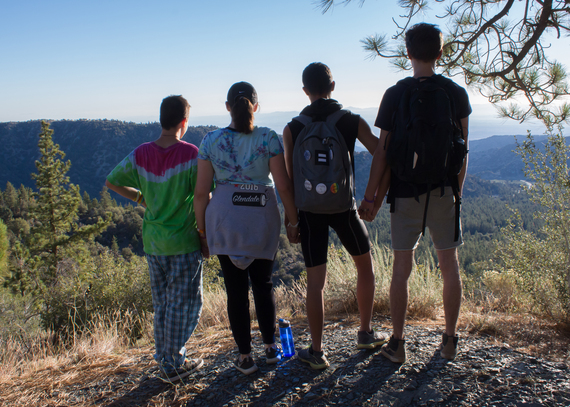 My line of work is incompatible with tears. They dampen the circuits and shake the frame, which is why cameras are designed to capture emotions and keep them safely away from the operator.

The realization first hit me in college, that I was capturing fun without actually participating in it, and left me disappointed years later when my aunt asked me to record my grandfather's graveside service. I focused and framed, and felt nothing.

I expected the same level of detachment when I pulled into Camp Brave Trails on a hot Thursday afternoon. I had three days to document the best parts of California's first leadership camp for LGBTQ youth, and though I would be working with friends, I planned to focus and frame, and feel nothing. That's how the job is done.

Right away, a camper named Yoni ran up and gave me a handmade button with my name on it. Excited, fabulous and recognizably on the autism spectrum, he apologized because the button was upside down, but he said I could always adjust it.

I grew up in Utah, one of the nation's reddest states, as a non-Mormon, autistic, gay kid struggling to force myself right side up in the eyes of a highly conservative culture. So I attached this button -- made for me by a non-Mormon, autistic, gay kid -- exactly as it had been made. No adjustments needed. I had been at Brave Trails less than twenty minutes and could already feel the professional veneer begin to crack.

Campers had arrived at Brave Trails from across the country, carrying the burdens of home to a place that promised to love and respect them, where they could go by their preferred names and pronouns, and where the leaders encouraged inclusion and sharing. The campers blossomed with expression through workshops, team building activities and even drag. Here in this mountain camp, they laughed and cried together and were renewed.

Over the next few days, the camera captured about six hours of moments, during which I maintained my focus and framing and kept my feeling in check. But, memory cards and batteries had to be changed. That's when the magic spilled from the camera to the operator.

It was a weekend of beautiful invitations, to dance, to hike, to talk and to prance across the dining hall in a lacy, blue tutu, hailed by shouts of "Go Kyle!" rather than "Oh God," or "You're so weird," or that awful silence.

My summer camp experience in the nineties had been different, characterized by jabs, pokes, punches or the absence of touch because cliques had been locally imported. Conversely, at Brave Trails, I had to pass through the Hug Line each morning to get to breakfast. It was impossible to bring the camera through the line; I had to actually participate in the mass hugging. With each embrace, I felt a lightness that I had only planned to capture digitally.

On the final night at Brave Trails, the staff presented each camper and counselor with a handmade award to honor a part of each person that was unforgettable. They were hand drawn onto slabs of wood and given out amid tears of understanding that by tomorrow, we would all have to leave this safe place and carry what we could back to a world that brought visible fear to many faces.

When I had filled my last card and emptied my last battery, I took the opportunity to listen with my biological ears to both the stories of struggle and the amazing discoveries made at camp. I stood to share, but cut myself short because I too had started to cry.

At breakfast the next morning, a camper named Daniel shyly presented me with a decorated slab of wood like those that had been handed out the night before. It was doused in glitter with a drawing of a camera, my name and two bold words: Memory Catcher. He had made me an award.

I was not a counselor or a camper at Brave Trails. The staff was paying me with what little money they could spare to capture the spirit of their camp, but I could not have captured this moment that so perfectly embodied the spirit of Brave Trails. No matter who you are or what your circumstances, you are here, and you matter. So, after many years of letting the camera absorb my emotions, I let go of the focus and framing, and felt.