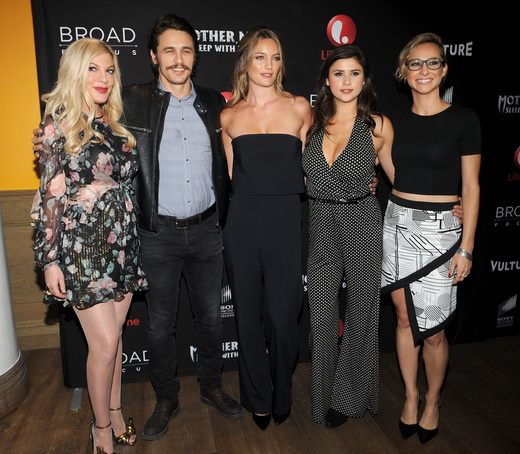 It's been twenty years since Lifetime's original campy cult-phenomenon, Mother, May I Sleep With Danger? starring Tori Spelling as the obsessively harassed lover of Ivan Sergei, and other than the casting, the reboot bares little resemblance to the original. Both Sergei and Spelling are back (Sergei as a college professor, and Spelling now taking on the role of the mother.) But, the more important and impressive role that Spelling takes on here is co-executive producer. Joining forces with executive producer James Franco, the two creative and collaborative minds show that there is no stopping their ever-growing empires that always seem to be tapping in to what is revolutionary and relevant.

First, there's Franco, who has adopted a reputation of taking on extremely diverse projects. From books of poetry to taboo films about gay leather bars, as awkward as Franco's artistic choices might seem to mainstream audiences, it is clear that the projects he picks to bring under his umbrella are to spread certain messages to wake the world up- and Mother, May I Sleep With Danger? is no different. While still campy, it always remains completely self-aware of the silly factor- surface wise, it's a film about lesbian vampires. If it didn't know how to laugh at itself, it would be in trouble.

But Lifetime is totally in on the joke- so much so that general manager and head of programming, Rob Sharenow, calls the flick "The Citizen Kane of lesbian vampire movies." But, through all the camp, it doesn't take away from the fact that there are worthwhile messages weaved in regarding monsters being metaphors in queer theory, the evolution of taboo sex in media, and the dangers of sexual assault on campuses- and Franco really knows his audience well enough to capture them with something fun while still informing them about something important. Simply taking a cameo in the film, he steps back and hand-picks new talent both in front of the camera and behind it. His two leading ladies Emily Meade and Leila George (daughter of Vincent D'Onofrio and Greta Sacchi) are both capable, knowing, downright gorgeous and destined for stardom, and writer and director (Amber Coney and Melanie Aitkenhead, respectively) more than understand Franco's tongue-in-cheek messages and know just how to get them across. The James Franco artistic umbrella is clearly about a lot more than entertainment.

Then, there's Tori Spelling. A seasoned pro, Spelling has never in her life gotten the credit she deserves. When she was first on Beverly Hills, 90210, audiences cried nepotism for years- never really tipping their hats to the fact that she took a character that was to have a minimal role and turned her into a beloved fan favorite that spanned ten seasons. She also never got the credit she deserved for how much of the conception of 90210 she was a part of- it was her idea for her father to take on a teenage soap, and she was also very handy in the casting process.

Tori Spelling is a survivor. She has been beaten down by the press time and time again, facing every kind of shaming under the sun, only to come back stronger. She is a self-made woman at this point who has worked since she was a teenager with an empire that consists of her acting, producing, voice-over work, writing and more. She also has always managed to stay on top of the new trends that have revitalized TV. So, as strange as the collaboration between Franco and Spelling might seem at first- it's actually more fitting than ever as these are two of the most varied people in Hollywood, and Mother, May I Sleep With Danger? really is a mix of what they both do best. Here, they talk about it with the rest of the cast and crew:

Although campy, this film really does bring up a lot relevant topics that are important for youths- such as sexual assault, particularly on college campuses, queer theory and the monster metaphor, and the sociological evolution of teenage sex in media. Talk about drawing teens in with camp and using this as a platform. 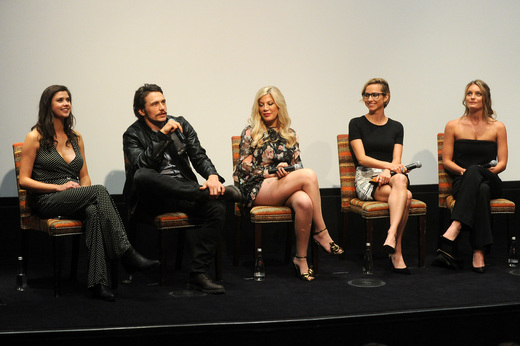 Tori, your father Aaron spelling was really one of the most iconic men in television and was famous for his connection with networks, known for always keeping up with the trends and helping reshape TV. You've now stepped into that chair and your relationship with Lifetime is very reminiscent of his relationship with FOX and ABC. Talk a little bit about really filling this producer role and keeping up with television trends today, which you seem to do so well.

TORI SPELLING (CO-EXECUTIVE PRODUCER, "JULIE"): Oh my God! Thank you for saying that! Thank you for putting that together. I feel like my dad and I were so intertwined creatively and my whole childhood I was just watching and observing and taking notes. I didn't know on what level, but I appreciated what he did from such an early age. I didn't know what I wanted to do- I knew I wanted to be an actress, but I didn't know I wanted to follow in his footsteps so closely and to me, I believe I want to be that for our generation. My father was relevant for so many years. No matter what age he was, he was reinventing the wheel. After everything with ABC, people thought he was done- and then he was back with FOX. My father was in on every re-write, every wardrobe choice, every hair choice- it's those details that made him brilliant. He cared so much. He kept it so on trend and also spoke on what the real issues were. And if I could be anything like him, it would be amazing.

Lifetime recently did a movies on both 90210 and Melrose Place, and while watching it, it showed that the most interesting character was Aaron spelling. Did you ever think of doing a movie on his life? Would you work with Lifetime on it and offer them a game-changer, more serious mini-series/movie?
TORI SPELLING (CO-EXECUTIVE PRODUCER, "JULIE"): Funny you should say that- there's something I definitely want to do in regards to my father's life- and I think I should definitely be the one to tell it. It's not committed to any network at this point, but I think Lifetime would be an excellent choice.

Talk a little bit about the monsters and queer theory metaphor that is shown in the film and why this is such a popular metaphor, and why it can be identifiable. Do you think that it's always helpful, or sometimes harmful?

MELANIE AITKENHEAD (DIRECTOR): I think it can be both- but if used the right way, like in this film, it can certainly help us understand the character Pearl's struggle being a monster but also trying to be human- and it can definitely help be identifiable in that regard.

Talk a little bit about how this film features sexual assault, particularly on college campuses, and how that is relevant today and an important thing to look at.

AMBER CONEY (WRITER, "SONTE"): It's so prevalent today, and I think this film doesn't trivialize it. Our main character experiences it to a very traumatizing degree. The character who commits this turns into a vampire- which is the ultimate punishment because it's a recompense of the act of such gore. Because, honestly, even with all the "blood-sucking", that's the most horrific act here in the film- so it's important that we take that part seriously. It's important that we make it known that it happens, whether in a fantastical lesbian vampire film, or on campus, it's something that happens everywhere and needs to be brought to light. And if this could bring that to consciousness even in a small scene, that's so fulfilling to me as a writer.

MELANIE AITKENHEAD (DIRECTOR): That theme was so important here. It's so important we are talking about that right now- even the next movie I'm working on deals with sexual assault. So, in this film, the vampires might be looked at as "bad," but they only go after abusive men- so we are really trying to highlight this theme that's being talked about, I mean, even at the Oscars. We need to bring more awareness to this issue and help make it okay for victims to speak out and say what is happening.

LEILA GEORGE (LEAH): I remember when I first read it, what I really loved was that if there was one good thing about the lesbian vampires it's that they go after abusive men. When they go to the parties they don't go after just anyone- they go after the guy that is abusing the girl. I just thought that was such a fabulous idea because it was something you don't really think of. It's a lot about being strong as a female, and I think that really comes across- and I'm happy that it does.

And campy as it may be, the message Franco, Spelling and co. are trying to send gets heard loud and clear making Mother, May I Sleep With Danger? perfect for Lifetime's"Fempire."

Mother, May I Sleep With Danger? premieres on Lifetime Saturday, June 18th at 8:00 PM ET/PT.