With the 2014 midterm campaign ticking to a close, campaigns on both sides of the aisle are returning to a tactic deployed in 2012: sending people mailers with their voting records, and sometimes those of their neighbors, in the hope of motivating them to vote through a bit of peer pressure. A Yale University study several years ago found voters who received similar notices were more likely to cast a ballot.

This year, The Wall Street Journal reported recently, Democrats in New York state sent out more than 800,000 "voter shaming" letters, grading residents on how often they turned out and telling them, "If you do not vote this year, we will be interested in hearing why not."

An Alaska super PAC sent similar letters listing Alaskans' vote histories and those of their acquaintances. Liberal groups in Oregon took the idea online, allowing voters to see whether their Facebook friends have already returned their ballots.

But while voting histories are a matter of public record, not all voters were happy to see this information.

"This mailer infuriated me," wrote Tina McGugan of a flyer received from the Kansas Democratic Party listing her neighbors' voting records.

"Responsible citizens vote and people are watching to ensure that you do your duty," the letter warned.

Voter shaming isn't the only strategy campaigns are trying in the election's waning days. A Democratic candidate for state attorney general in deep-red Alabama sent a mailer issuing instructions to vote straight ticket Republican -- except for in his race.

"Mark your ballot straight ticket Republican to AUTOMATICALLY choose the Republican in every race EXCEPT ATTORNEY GENERAL," Joe Hubbard's campaign urged in an email.

Hubbard is one of the few Democrats running a competitive statewide race in Alabama, where many voters cast a straight-ticket ballot for the GOP.

“Republicans across the state have asked me what steps they can take to support me while also supporting their party," Hubbard told a local TV station. 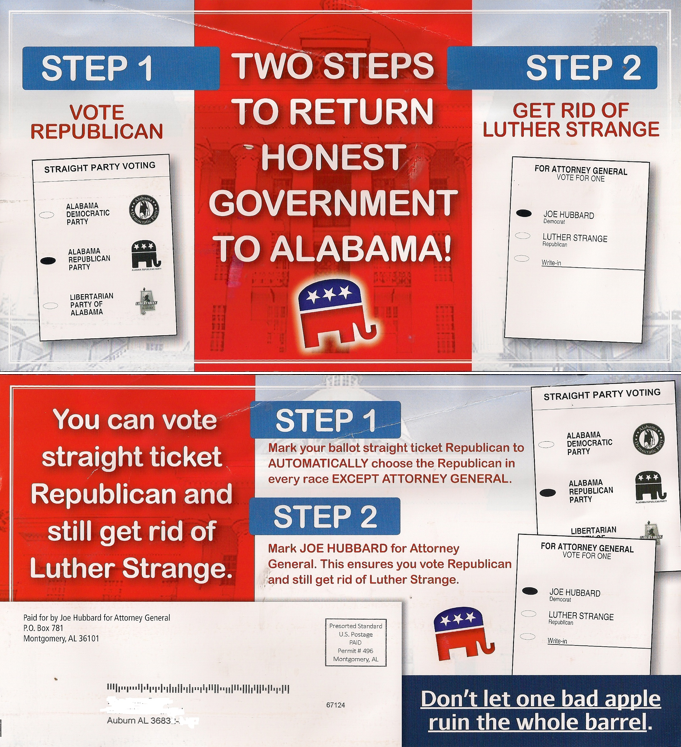