WASHINGTON -- In its famous Citizens United decision in 2010, the U.S. Supreme Court opened the door to big spending by outside groups, rejecting the argument that such unlimited contributions by corporations and other entities would tilt the political system away from average citizens. In his opinion for the majority, Justice Anthony Kennedy agreed with the view that "independent expenditures do not lead to, or create the appearance of, quid pro quo corruption. In fact, there is only scant evidence that independent expenditures even ingratiate."

But a new study by two graduate students, conducted through field research, provides fresh evidence that money truly does equal access. Specifically, the study found campaign donors are more likely than regular constituents to get meetings with lawmakers or high-ranking officials.

Joshua Kalla at Yale University and David Broockman at University of California, Berkeley worked with the grassroots progressive group CREDO Action in conducting the study. The experiment was embedded in the group's actual lobbying efforts last summer around a bill to ban a chemical, targeted at 191 members of Congress from one political party.

CREDO sent each of the 191 congressional offices a meeting request. The offices were randomly assigned to receive either a request describing the prospective attendees as "constituents" or one describing them as "donors." No other details about the individual were provided, and the letters were identical in all other aspects.

What they found was that the requests with donors resulted in significantly more meetings with members of Congress or their top staffers. In contrast, the constituents more often saw their meeting requests rejected or punted to lower-ranking aides. 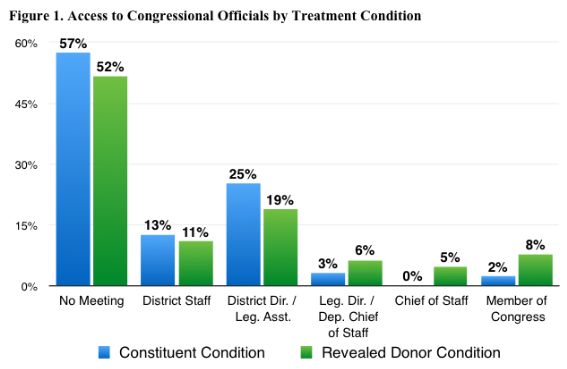 "We were certainly surprised by our results," Kalla told The Huffington Post. "The magnitude of the difference between really just changing one word -- constituent to donors -- in two spots in an email, had a pretty massive impact in being able to meet with a senior congressional official."

The study seems to undermine Kennedy's claim that donations to independent expenditures shouldn't influence lawmakers. In this experiment, the lawmakers knew nothing about the donors, such as whether they had donated to their campaign in particular, or how much they gave and when. In fact, they could simply have been a donor to a super PAC.

"We were dismayed to see the Supreme Court decision in the Citizens United case, and particularly the fact that it was based in part on the fact that they suggested there was no evidence that there was any corrupting evidence of federal campaign donations on the political process. So this study is so exciting because it's the first scientifically based evidence that we've seen that there is a real link between campaign donations and federal policy," said CREDO Political Director Becky Bond.

In their report, Kalla and Broockman speculated on why these donors still get access.

"A simple analogy communicates why legislators may privilege the concerns of donors who have not contributed to them directly: a thief can compel a victim to hand over their belongings by brandishing a handgun even without firing it; the knowledge that the thief can fire the gun is what induces the victim's compliance," they wrote.

In other words, the fact that a person has contributed money in politics means that he or she can likely do so in the future, and therefore, should be listened to.

Bond said CREDO often works with political scientists and participates in studies, "largely aimed at, how do we help average citizens have a greater impact on democratic processes?"

In their report, Kalla and Broockman said that while the legislators and meeting attendees were not aware of the experiment, there was no deception involved; all the attendees identified as donors actually were, and the meetings were indeed part of CREDO's efforts to build support for the bill.

The emails sent to the offices, with the differences in bold:

My name is [EMPLOYEE] and I am an Organizer with CREDO Action.

Around a dozen of our members near [DISTRICT CITY] who are active political donors/concerned constituents have expressed interest in meeting with the Congressman, in person or by phone from the [CITY] office.

If the Congressman is not available, they’d like to arrange a meeting with the chief of staff, LA, or local district director, in person or by phone from your office.

Could we arrange such a call on [DATES]? Our members are looking for just 30 minutes to have their concerns and ideas heard.

Looking forward to hearing from you on what time might work well and who our members can expect to meet with.

Thanks in advance,
[EMPLOYEE]

Clarification: This piece has been updated to remove a reference to a Washington Post article that speculated on the legislation that CREDO members were mobilizing around during this experiment, and one conjecturing the likely party at which the lobbying was directed. The study's authors said it was not the correct bill but declined to make public which bill it was, or the party they targeted.