"Remember that time we lost the GoPro in the river? Tell them that story when Gabe almost died..." That was the atmosphere during a recent campfire reception at Pixar Studios for The Good Dinosaur when Director Peter Sohn, Producer Denise Ream, Director of Photography - Lighting Sharon Calahan, and Supervising Technical Director Sanjay Bakshi shared stories of their research trips for the film. Research is key to Pixar Studios' success, but what to study when your main characters have disappeared? 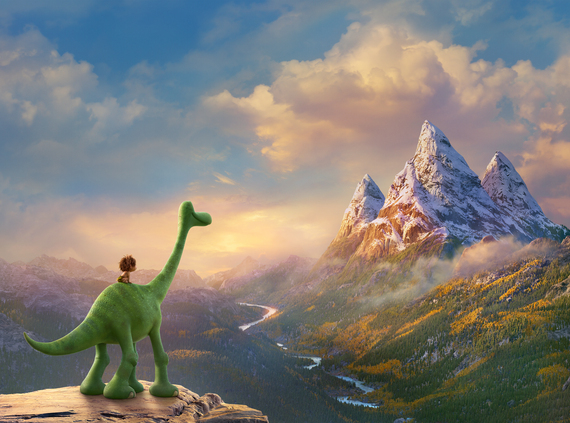 Disney•Pixar's The Good Dinosaur imagines a world where dinosaurs never became extinct, and tells the story of a lost young dinosaur (Arlo) finding his way back home. At its core, The Good Dinosaur is a western film, and that's what Director Peter Sohn needed to research to understand. 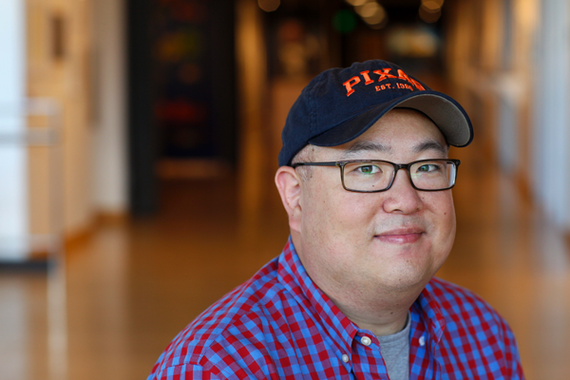 When Peter Sohn took over director duties for The Good Dinosaur in August 2013, the film was in a massive state of flux. "I was in this crazy place," said Sohn, "and needed to go out, get lost, start researching, and get re-energized." So his team headed to the wilderness, the backdrop for their story, to get lost - and find their story.

Picture Russell (the Wilderness Explorer from Pixar's Up) fully grown, with questions and comments flying a mile a minute, and you get a sense of Sohn's curiosity and enthusiasm (Sohn even voiced Russell in the George & A.J. Pixar short). However, Peter was certainly not a Wilderness Explorer like Russell. Plop him outdoors and "everything Pete saw he was going, oh my god" producer Denise Ream explained, "everything was new to him. It was really exciting." 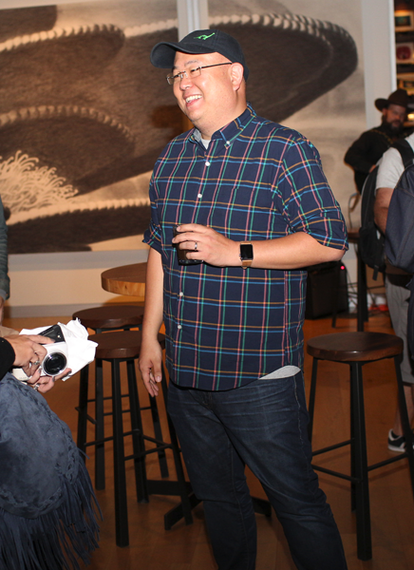 The research trips profoundly changed the director. In the film, Arlo, the young dino, comes across a ranching family scratching out a life at the base of the mountains, so the Pixar team traveled to Oregon to visit a working ranch. "That family blew me away in terms of what it was like living out there," explained Sohn, "and that's the part that changed my life."

On the ranch, Joe and his wife Joan lived with their five college age kids adopted from Haiti. Joe, the Dad, was a no-nonsense, hardened, disciplinarian like Jack Palance's Curly from City Slickers. Sohn said, "I was intimidated for sure by the father." As soon as the Pixar Slickers arrived at the ranch, Joe got them on horses and headed out for a cattle round-up. "There was no direction or teaching," Sohn explained, "I got on this horse and I'm terrified." They rode off to what looked like a black lake in the distance, as they got closer they heard a rumble, and made out the "black lake" was a herd of 600 stampeding cattle. 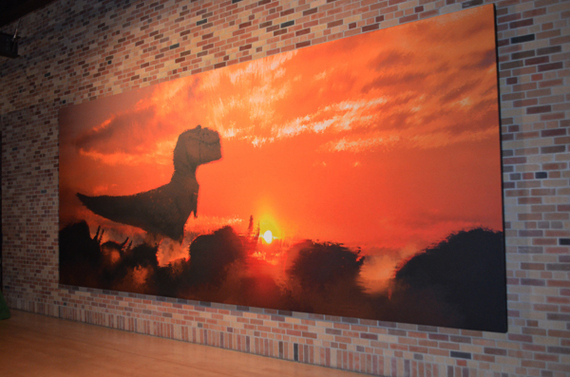 Concept art for "The Good Dinosaur" in the atrium of the Steve Jobs Building at Pixar Studios, photo by Dave Parfitt

Sohn wished his horse would slow down as his jostled organs inside turned to mush. He elaborated on his feelings of inadequacy, "that whole afternoon I was trying to be a dude, trying to be a man, and I was just awful, a failure."

After the cattle drive finished at the end of the day, they returned to a funky, musty cabin, and the boys started swapping stories with their Dad. Peter described how the boys egged their father on, "hey Dad, tell them boys that story about when you and Gabe and Luke... Hey Dad, tell them boys about that time when Luke almost broke his leg... Hey Dad, remember that time..." The job was done, and the family could bond over stories of the day as well as memories long past.

Trio of T-Rexes in "The Good Dinosaur" featuring the voices of (L-R) A.J. Buckley, Sam Elliott, and Anna Paquin. ©2015 Disney•Pixar. All Rights Reserved

Towards the end of the night, Joe, the Dad, pulled Pete aside to say, "Peter, I know you city boys never seen anything like this." He directed Sohn outside, around midnight, when there was no moon in the sky, and Peter saw the stars for the first time. Sohn remarked, "I have never witnessed those skies, the Milky Way, before. That family, blew me away in terms of that lifestyle and their love for each other."

Pete Sohn and his team lovingly depict this ranching family in The Good Dinosaur as a family of T-Rexes. Butch is the T-Rex dad (voiced by Sam Elliott) herding "cattle" with his own kids Nash (A.J. Buckley) and Ramsey (Anna Paquin). 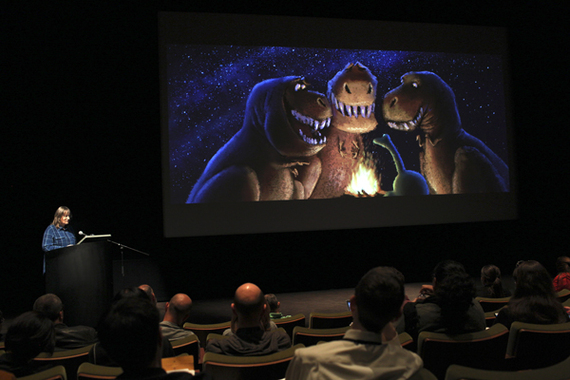 As the campfire at Pixar Studios began to die, Director Peter Sohn summed up the impact of those research trips on the film - "understanding the simple beauty and capturing the love of a family." Disney•Pixar's The Good Dinosaur opens November 25, 2015.