Students found guilty of sexual assault by their universities can rest assured there's a good chance they won’t be kicked out of school. If they want someone to thank, they might send their praise to the Association for Student Conduct Administration for telling universities across the nation not to be "punitive" when handling campus rape.

Intense focus on sexual assault by college activists, members of Congress and the Obama administration was a catalyst this year to prompt multiple pieces of federal legislation and a White House task force to address how universities deal with campus rape.

Since lawmakers haven’t stepped up to offer definitive guidance, trade groups and consultants have filled the void. The result: Not even a third of college students found guilty of sexual assault are kicked out of school, according to a new Huffington Post analysis.

Students found responsible for sexual assault were expelled in 30 percent of cases and suspended in 47 percent of cases, according to The Huffington Post’s review of data collected from nearly three dozen colleges and universities. At least 17 percent of students received educational sanctions, while 13 percent were placed on probation, sometimes in addition to other punishments.

The Huffington Post also surveyed data on cases at more than 125 other schools from fiscal year 2011 through 2013, obtained through a Freedom of Information Act request to the U.S. Department of Justice. An analysis of that data, which reported on colleges that receive federal grants to combat rape on campus, reached a similar conclusion: A conservative estimate of the cases shows 13 percent of students found responsible for sexual assault were expelled; at most, 30 percent were expelled. In addition, between 29 to 68 percent were suspended.

(READ: The schools that declined to provide any data on sexual assault.)

Meanwhile, dozens of college administrators, attorneys, experts and consultants agree: Someone who rapes another student shouldn't get to stick around campus. But in four cases that became public this year, at the University of Kansas, Michigan State University and the University of Toledo, students found responsible for sexual assault weren't suspended or expelled, but rather received probation and educational sanctions.

In another incident at James Madison University, students found responsible for an assault captured on video were punished with "expulsion after graduation."

"The worst thing we can do is tell someone they can't go to school at our institution," said ASCA president-elect Laura Bennett, noting that mandating sanctions could deter victims from reporting attacks.

The ASCA doesn't outright declare what punishments should be meted out, but it does distribute literature emphasizing that "campus proceedings are educational" and "the process is not punitive." The organization recommends that "legalistic language," such as "rape," "judicial," "defense" or "guilty" should be yanked from policies and procedures.

"'Rape' is a legal, criminal term," Bennett said. "We're trying to continue to share we're not court, we don't want to be court -- we want to provide an administrative, educative process."

ASCA membership has been growing rapidly ever since the U.S. Department of Education issued a Dear Colleague letter to all colleges in April 2011, telling them they must adjudicate sexual assault cases on campus. The letter served as a wake-up call for schools, and since then, ASCA's membership almost doubled, Bennett said. The group currently has about 3,100 members, she said, and adds an average of three new members a day. 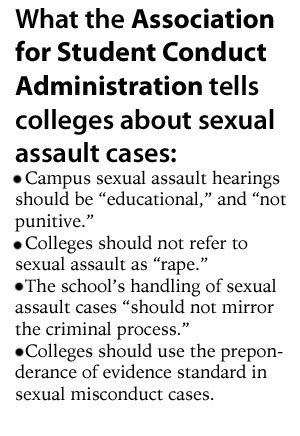 Yet oft-cited research by David Lisak, formerly of the University of Massachusetts-Boston, illustrates the concern about leaving guilty students on campus: Around 6 percent of college men surveyed in Lisak's study had committed rape, but the majority of them were repeat offenders, usually undetected. This is why advocates and experts are worried about leaving sex offenders on campus or allowing them back.

"These are educational institutions, and they view their principle function to be educators," said S. Daniel Carter, ‎director of 32 National Campus Safety Initiative at VTV Family Outreach Foundation, a group born out of the 2007 mass shooting at Virginia Tech. "They believe it to be part of their responsibility. That doesn't mean there can't be an educational element -- expelling someone can be an educational tool."

Even the group responsible for colleges substituting the term “sexual misconduct” for “rape” balks at this reaction.

"Our writings and position are consistent for 17 years," said Brett Sokolow, president & CEO of the National Center for Higher Education Risk Management, which is frequently hired to advise schools on sexual assault policies. "And we have pushed higher ed to be tough on sanctions because they were already soft when I started consulting."

"The softness and focus on rehabilitation come from student development theory, which encourages progressive discipline to promote maturation and better decision making," Sokolow continued. "Fine, I say, but not in sexual misconduct cases."

Even Bennett, of the ASCA, recognizes the need for expulsions.

"You've got to keep thinking about this person being a threat," she said. "Suspension or expulsion might keep 10 or 20 other students safe on campus. Sometimes the best thing is to actually remove the student."

Yet the fact remains, university expulsion is rare for rape -- and other crimes, too. HuffPost reviewed another 221 cases in which students were found guilty of sexual misconduct, a term that includes rape and assault, as well as harassment, stalking and other violations. In these misconduct cases, universities expelled or dismissed students 17 percent of the time. Another 26 percent of students were suspended. Almost half of students found guilty of sexual misconduct -- 44 percent -- received “educational sanctions,” sometimes in addition to probation or a formal warning.

Information came from the colleges, obtained through open records requests, information published proactively by the school, requests directly to the schools, and through other HuffPost sources. Schools were selected to represent geographical diversity and include large state universities and flagship campuses; elite and Ivy League private institutions; and smaller liberal arts colleges. A large majority of the cases reviewed were adjudicated between the fall of 2011 and spring of 2014.

HuffPost's analysis of the data from Justice Department figures was presented as a range of possible sanction rates because there was some overlap of sanctions, and the exact number of cases included in this set is not known. This information, which is not a database, is collected by the Justice Department through a questionnaire sent to all institutions receiving campus grants to combat sexual assault. The DOJ sends the responses to Congress in regular reports, but does not make the information public.