If one factor epitomizes the disagreement between New Urbanists and Landscape Urbanists as both described and imagined in Landscape Urbanism and its Discontents: Dissimulating the Sustainable City, that factor would be the difference between a network of streets and a campus. For New Urbanism, the street is most important component of a city's infrastructure and inventory of public spaces; for Landscape Urbanism, it's a park or other planned space that constitutes a campus placing urban activities in a more natural seeming environment.

For some New Urbanists, this focus on wide-open spaces separate from streets is damning proof that Landscape Urbanists are promoting the latest iteration of modernist urban design, since modernists had little use for traditional streets and promoted superblocks and "towers in the park." Yet cities all have superblocks embedded into their urban fabric -- centers of government, religious, cultural or other institutions; schools, colleges and universities; hospitals; plazas and parks. 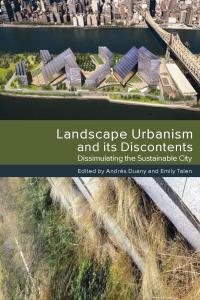 Stating the obvious, cities need both networks of streets as well as larger planned spaces. This is not a point that all New Urbanists ignore; as Daniel Solomon writes in his essay in the book, giving an extreme example, "there is no such thing as New Urbanist International Airport." (166)

All this becomes important in trying to understand what is happening, or could or should happen, in post-industrial cities around the world. For more than half a century the industries that were the basis for 20th century cities flew the coop and landed in the suburbs or vanished to faraway places. They left behind often vast and frequently polluted ruins, not to mention rail yards, canals and airport runways, along with shattered economies and impoverished former workers. Now cities are picking up the pieces, trying to re-purpose and make productive these abandoned places.

I live in Santa Monica, California, a post-industrial city that is and has been trying to figure out what to do with former industrial sites for almost 50 years, going back to when McDonnell-Douglas closed what had been one of the largest factories in the world. (Donald Douglas had begun manufacturing aircraft in Santa Monica in the '20s.)

When "the mill closed," Santa Monica did what was conventional in the 1970s: the land was developed as a suburban business park, with low-slung office buildings surrounded by surface parking. When more industrial land became available in the '80s along the rail line that was Santa Monica's original, 19th century connection to Los Angeles, the office park model was repeated, except by then the economics were such that parking was built underground.

A generation later, the business park model is seen as a mistake. The monoculture of development on superblocks contributes to traffic congestion (the offices attract masses of commuters who jam the few streets that connect to the freeway or anywhere else), and the pressures on the housing market from all those workers have made Santa Monica unaffordable to the middle- and working-class residents who once defined the city.

The City of Santa Monica recently adopted new development standards for much of its remaining industrial areas, which lie near "Bergamot Station," a former low-density industrial property that became a center for art galleries in the '90s after the City purchased the land with transit funds. In 2016 Bergamot will have a stop on a new light rail line that will connect Santa Monica with Los Angeles.

The most important words in the "Bergamot Area Plan" are "streets" and "neighborhood." The plan's most significant urban form creating elements are the addition of new streets and the extension of others to integrate large, privately-owned industrial parcels (such as a six-acre site that includes a 200,000 square foot abandoned pen factory) into the city's grid and connect them to the light rail. This new, "transit-oriented" development is planned to be a mix of uses; as the plan puts it, its purpose is "to take the area from a monoculture of workplaces to a diverse social, cultural and economic neighborhood."

While I don't know if any of the designers who worked on the plan call themselves "New Urbanists" (some emphatically don't), the plan is thoroughly consistent with the Charter of the New Urbanism.

As the Bergamot plan made its way through the public process, another process was underway involving another piece of Santa Monica's industrial heritage -- Santa Monica Airport. The airport began as a grass landing strip in 1917; in the '20s, when Santa Monica floated a parks bond to buy most of the land, it became the site of Donald Douglas' manufacturing operations. As discussed above, the Douglas plant closed in the '70s, but the airport remained in operation.

How this relates to urban form is that the kind of urban, streets-oriented, neighborhood-creating re-development planned for Bergamot would not be right for the airport land. The airport is never going to be well connected to transit, and the fact that the land, easily worth $2 billion, is publicly owned means that it comprises a major public asset that should be put to public use.

The area has a historic shortage of parks and a movement, called Airport2Park, has begun to have Santa Monica, once it confirms its control over the airport land, turn it into a park and (taking into account existing cultural uses) cultural center -- what one might call an urban campus. (Authorial note: I am one of the organizers of Airport2Park.)

The design of a park would not simply entail the design of a park. There will be significant urban issues -- connectivity and access and how the park will be "programmed" -- even if the land is not developed with streets, or for housing or jobs.

Meaning that ... there might be work for ... Landscape Urbanists.