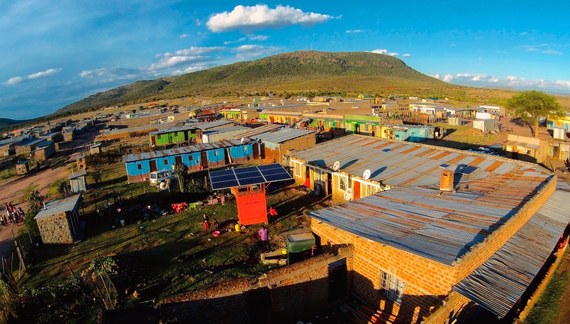 One piece of that architecture took a significant step forward last week. Beyond the grid solar financier SunFunder moved a step closer to closing the industry's largest debt round targeting a new 'beyond the grid solar fund' worth $50 million. That fund has now been capitalized with $15 from the US government Development Finance Institution (DFI) the Overseas Private Investment Corporation (OPIC). The deal cemented a relationship between the two institutions that means millions of people can enter the 21st century with the most sophisticated clean technology available - a combination of solar PV, Li-Ion batteries, and LED bulbs that currently dominate a market that according to BNEF will reach $3 billion by 2020. It turns out small can be very big. 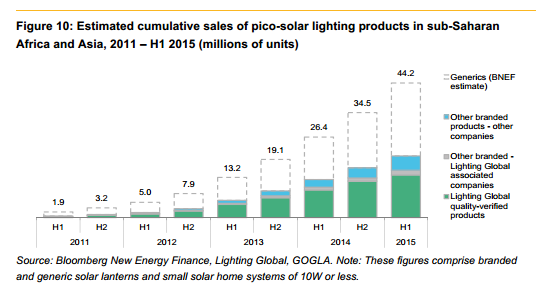 What makes this deal important is that it's potentially the first pipe in a new financial plumbing necessary to unlock the vastly larger sums needed to finance the clean energy revolution. Ceres and others have pegged the amount needed at 'a clean trillion.' A hefty sum for a global market that is growing, but not near that value today.

What other markets are even near that amount? Quite a few actually from business travel to global pharma sales to the market capitalization of companies like Apple and Microsoft. The truth is the global economy is quite capable of investing in and generating markets at this scale (it's also capable of hiding markets nearly 8x larger in tax havens around the world). So let's not be intimidated, the money's there it's the infrastructure to unlock it that isn't. 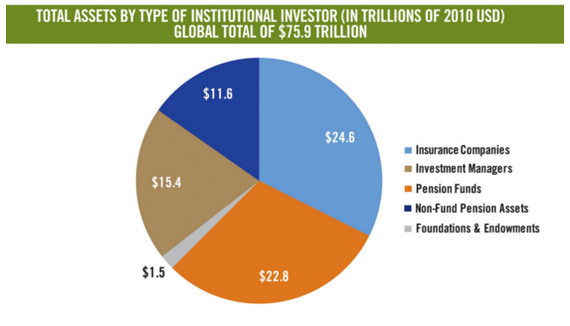 Now to be clear we can, will, and are solving this on the utility scale side, particularly in developed countries. Because ticket sizes are large and cash flows fit nicely with the existing financial infrastructure we have, it's only a matter of time. But distributed generation faces a different set of problems ranging from a lack of credit scoring and data on one hand to disaggregation on the other. After all, the problem is challenging enough to scale investment on the megawatt and gigawatt scale. Imagine the challenge of aggregation on the watt scale for 1.2 billion people?

That's why institutional money (i.e. pension funds) which won't even look at investment vehicles until they reach minimum levels - say $100 million - and collect years of data to de-risk investment decisions. That's why deep pools of capital have been all but a pipe dream for the young beyond the grid solar sector. After all, an institutional investor managing a multi billion dollar fund simply can't nickle and dime - the transaction costs are just too high. At the same time commercial banks rarely bother not just because of aggregation but because of a lack of staff expertise in this and other distributed solar market segments. That leaves a lot of distributed solar in emerging markets without the capital it needs to get built simply because we don't have plumbing appropriately sized for, or familiar with, today's market. Worse, without capital we can't build a pipeline of companies and projects capable of aggregating to those levels. So we are stuck in a bit of a Catch-22.

This problem is exactly what specialized intermediaries like Jigar Shah's Generate Capital were built to solve in developed markets. By aggregating small deals for proven clean energy technologies they can step in and provide financial plumbing that unlocks investment in the new distributed clean energy economy.

Similarly, SunFunder is stepping in to create the necessary plumbing from the bottom up. Rather than starting with resorts, hospitals, and other commercial users of energy that today rely on kilowatts and even megawatts of dirty diesel gen sets in emerging markets they are starting with poor households burning kerosene for light. A market that may seem small at $1-2 a day but is in fact a $27 billion global market.

In retrospect though beginning with lighting turns out to have been a very wise move. Because this market has certain characteristics that make financial entry faster and easier most notably short time horizons for repayment (from 0-3 years). It's this short time window coupled with sophisticated data collection that limits investor risk while quickly generating the data necessary to leapfrog from nascent sector to securitization in just a few short years.

That rapid cash turnover enables these specialized entities to build their business and prepare for next steps up the energy ladder - 10 year mini grid and commercial and industrial loans more suitable for commercial banks and long term institutional investors. With 400 GW of diesel gen sets operating around the world, a market 30% larger than the installed US coal fleet ripe for displacement, there's no doubt SunFunder and others are eyeing their next move up the ladder.

If the plumbing existed today we might applaud what looked like a disruptive strategy - go to the markets where your competitors aren't and build your way up. But the truth is they really have few competitors. That's the problem - and the enormous opportunity. Because those at the top can't be bothered to put in the years of spade work necessary to truly understand and build this market. That leaves those motivated enterprises like SunFunder to put in the sweat equity to unlock a patchwork of relatively small amounts of money across a variety of 'nontraditional' investors so they can build towards the magical levels required to unlock scaled investment. When they do they'll have one competitive advantage others won't be able to easily replicate - the data and track record necessary to properly analyze risk and unlock scaled investment.