Take one run down high school near Watts, California, that straddles two rival gang territories and has a 75% dropout rate for incoming freshmen; add one visionary ex-newscaster who is profiled in this weeks' New Yorker, mix with his charter group that became the first in the country to seize a high school in a hostile takeover, and you've got the unique educational institution that is Locke High School. For years, Locke High has been a poster child for failing inner city schools where students were more likely to drop out than graduate. Graffiti marred the walls of the chaotic campus and fights broke out daily. Last year, nearly half of the 3-thousand-plus students were suspended at least once. 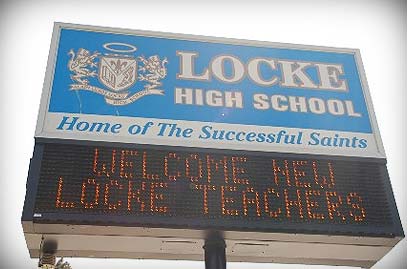 Steve Barr, a political fundraiser caught up in the struggle to reform inner city schools, asked the Los Angeles Unified School District to give his charter-school-management organization control of Locke to try to turn it around. The district refused. So in the summer of 2008, just four months after a riot started by two rival cliques caused the then city-run school to go into lock down, his Green Dot public schools took over Locke High in the first such "hostile takeover" in the country. Green Dot has opened seventeen charter high schools in some of L.A.'s poorest neighborhoods taking kids who arrive, in most cases, far below grade level and send nearly eighty per cent of them to college. Now as Locke's first academic year as a charter school is winding to a close it's time to see if a school that ranked third lowest in the state can see a bump in academic standards.

Take three seniors-with more challenges and heartbreak than most people twice their age-add one intrepid public broadcasting producer, roll dozens of hours of tape following the kids from home to school and home again, and you've got the KCET-TV (PBS) documentary "Inside Locke High," easily the most compelling-and telling-analysis of what is really happening to kids on the front lines of the battle for school reform. 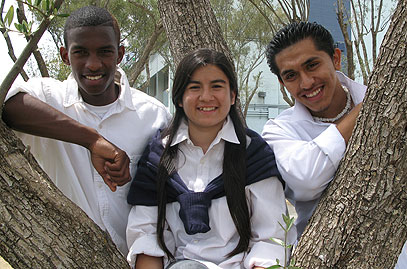 What Joanna, Damon and Bryan tell us--in their own words-- is so much more than any study or analysis of the ambitious academic experiment could provide. Their stories provide unique insight to what "educational reform" translates to on an individual level. Are new teachers, the addition of uniforms and tardy sweeps enough to change their lives and raise them from poverty?

As Education Secretary Arne Duncan has expressed interest in committing several billion dollars of the federal education stimulus to a Locke-style takeover and transformation of the lowest-performing one per cent of schools across the country, take a moment to see what this transformation can mean through a student's eyes. You may never look at charter schools the same way again.

Inside Locke High and Return to Locke High can be viewed at www.kcet.org/socal, where you can also hear an interview with Steve Barr.