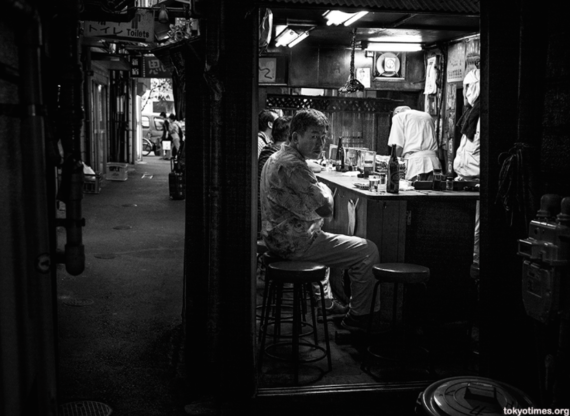 Ted Gioia's recent article entitled "Can Club Owners Make Musicians Play for Free?" is, like many of his other posts, quickly going viral on social media with the jazz community. The premise is tailor-made for the times -- evil bar owners (corporate elite), poor musicians (downtrodden proletariat), government (selfless saviors) via the courts will ride in on a white horse to protect the worker from the jaws of the oppressor (after all, "profit" is defined as "unpaid wages" and it's time for those unpaid wages to be paid!).

I'm an admirer of Gioia's work -- he is an outstanding writer and intellectual and his posts are thoughtful, well-reasoned, and informed by his impressive knowledge of music and history, but this essay is a departure from his usual form. It plays well on Facebook, as this soft marxism always does, but it just doesn't hold up to much critical scrutiny.

To begin with, the premise in the title, as phrased, is difficult to swallow -- can club owners make jazz musicians play for free? (While Gioia doesn't specify the genre, he's a jazz writer, and there's a jazz band pictured, so I assume that jazz is the genre in question.) Unless involuntary servitude has been somehow re-instituted for jazz musicians playing clubs, I'm not sure how any club owner is forcing any musician to play for free. No musician is "made" to play for free -- if any are doing so, they are doing it of their own free will (no pun intended), likely because they have decided that their desire to perform and the exposure that they hope to get from these performances are a higher value than the meager fee they might receive from the club. As someone who used to actually play these clubs for a living, I know this scene very well, and I've seen it deteriorate over the last 25 years, so I am not unfamiliar with the supposed "unfairness" of the live music scene. It is not, however, unfair -- the argument of many musicians and artists rests on the assumption that one should be paid according to how much work and effort and training it took to attain a professional level of proficient. While this is true for a surgeon or an engineer, it is not true for most musicians. This argument ignores the fact that high levels of complexity and difficulty are not universally held criteria for enjoying music. Very few people care about how difficult it was to learn the instrument or the piece, what they care about is whether they enjoy the music that is being presented. In addition, live music of all kinds, unfortunately, no longer has the appeal that it did 30 years ago, in the days before we had a universe of distractions and entertainment instantaneously available.

Here is a quote from Gioia's essay:

And many performers, desperate for an opportunity to showcase their skills, agree to do just that. I don't blame the musicians. In most instances, they struggle to survive and have to grasp at any opportunity, however meager. But the owners are a different matter.

So, musicians are desperate for a showcase, and therefore, the club owners must subsidize their desperation? In reality, the club owner is simply responding to whatever attracts the clientele and unfortunately, live music is simply not that attractive or special anymore, hence it does not regularly generate enough income to cover the expense of a band (unless, of course, that band has a large following that will show up regularly and spend money copiously). A musician's desire to make a living as a performer does not automatically require the rest of society to like it and pay for it. It's as simple as that.

How many club owners would ask Lady Gaga or Keith Jarrett to play for free? None. Why? Because both artists can generate ticket sales and bar receipts that exceed their fees -- a mutually beneficial arrangement for both the club owner and the artist, which is how it must be. Gioia somewhat flippantly says that "the owners are a different matter." Yes, the owners are a different matter. The restaurant/bar business is a tough slog -- net profit margins range (on average) from 2-6 percent which means that the club owner does not have a pile of cash sitting around to pay the band, unless, of course, the band can generate enough extra income, at a minimum, to pay for itself in full. For most groups, especially in the jazz genre, it is impossible to do this on a regular basis. On top of that difficult profit margin, keep in mind that approximately 60 percent of these businesses fail in the first three years. Gioia and many jazz musicians are just confused -- they think that by virtue of opening a bar or restaurant, the owner automatically becomes a philanthropist with a registered 501(c)(3).

As if all of that class warfare boilerplate weren't enough, it gets worse. The essay continues by making several comparisons between musicians and strippers. In each case, Gioia ignores the obvious difference: strippers bring in customers, customers who spend enough money to pay for all of the expenses. This is why unionization hasn't been very successful with jazz musicians working clubs and casual gigs -- in order to negotiate with management, the employee needs some leverage, which usually means withholding the services without which the business could not run. In the case of the strippers, we can be quite sure that the clientele at those establishments is not going there for the ambience, the excellent mixologist behind the bar, or the fine dining being served at the midnight buffet -- they are there to see naked women, and if those women aren't there, there won't be any income. The same cannot be said about jazz groups playing restaurants. They have nothing to bargain with because they are not the reason that most people are going to the establishment in the first place. Even with more popular groups that might have the ability to draw a crowd, the normal negotiations regarding salary must take place -- you won't be paid what you think you're worth, you'll be paid according to the value you can add to the business.

Gioia then continues with a somewhat tortured legal inquiry into whether musicians playing clubs are actually "employees" or whether they are independent contractors. If they're employees, he asks, then why aren't they getting minimum wage? (As if minimum wage for four hours on Friday and Saturday night is going to make a difference anyway.) In any case, when your position relies on a discussion about musicians and strippers and minimum wage and the definition of an independent contractor, you've lost the argument -- the only people this will be convincing to are the ones who want the clubs to pay them more, but the rest will recognize it for what it is; a desperate attempt to find a rationale for regulation to artificially increase the wages of a special interest group, namely, jazz musicians playing bars and restaurants.

This issue has been around for a long time. I noticed it first in the late 1980s, when rock bands in major centers started paying clubs to play, but today it has gotten even worse; some jazz musicians are actually paying the audience to attend their gigs! If Gioia has his way and the government gets involved (which is unlikely), the end result will be less work and less opportunity for jazz musicians. As I've written about previously, there has been similar agitation in recent years by big city unions trying to shake down the clubs, but it has not achieved anything and neither will this attempt. Club owners will not and cannot pay for music unless that music adds enough income to pay for itself. Any attempt to squeeze that meager profit margin further will simply result in less live music, paid or otherwise, in the clubs and restaurants across the country.