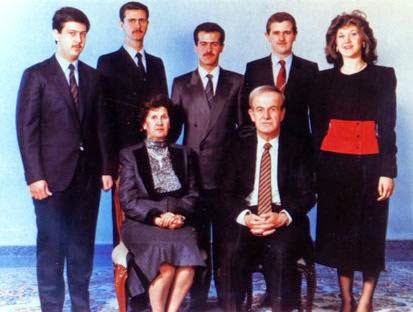 In a Foreign Affairs piece, "The Calm Before the Storm" (January, February 2015), Nassim Nicholas Taleb and Gregory F. Treverton make the following statement in response to the question of why Lebanon is fairing better than Syria these days:

"Prior to its civil war, Syria was exhibiting only pseudo-stability, its calm façade concealing deep structural vulnerabilities. Lebanon's chaos, paradoxically signaled strength. Fifteen years of civil war had served to decentralize the state and bring about a more balanced sectarian power-sharing structure."

Usually one generalizes from specific examples, but in this case an observation about a nation state might also be used to talk about a particularity, say an individual or family. Syria is like the individual who has had a seemingly secure upbringing. In fact, Bashar al-Assad is the son of an autocrat and he came to power by way of accession, after his older brother died in an accident. We might assume he had relatively little experience with turmoil. On the other side of the fence Lebanon has been a notoriously riven country with a long history of conflict between Christians and Muslims. It's the home of the Hezbollah. In this regard Lebanon might be compared to the child who has grown in a turbulent environment, in a house in filled with arguing parents and problems of addiction or alcoholism. When the shit hits the fan who is going to fare better? The child or the country with no skills in dealing with adversity or the kid or nation who has had to face serious challenges? No one has truly answered these questions. Some children as well as grownups, who have fragile dispositions, merely crumble when the going gets tough. But the Lebanon/Syria paradigm that Taleb and Treverton point to is instructive both in terms of nation and personality building. One can't help but feel that a wide palette of experience in handling ups and downs is the best preparation for both countries and individuals.

photo of al-Assad family from the early l990's