This exchange of words usually ends with: "If you mention it again, the answer will be never."

"Never? I can't even have the Easy Bake Ultimate Oven that bakes more batches when I'm 25?"

"Sure, but if you don't have a real oven by then, making cookies may not be the best use of your time."

"How about she gets it for her next birthday, or maybe Kwanzaa?" my son pipes in. He's already eying a Penny Board for Secretary's Day, and has informed me that, although we are Jewish, he will be giving up vegetables for Lent.

My children's Hanukkah wish lists were so comprehensive this year, I was forced to explore alternative channels in my search. Consequently, I have sent a friendly letter asking someone who has slighted me in the past for a little holiday help. Some might say it's more of a formal accusation, but really, it's just a hand-delivered note that needs to be notarized and signed on receipt. It goes:

I have never complained about you forgetting us Jews in the past, but times are tough. I mean, I don't want to highlight any flaws you have, but let's talk religious profiling, shall we?

I'm sure the fact that we don't believe in you has something to do with your snubbing us year after year. Do we, a people known to produce a whiner or two, complain? No, some of us, myself included, have made an effort to believe.

Let us not forget the Christmas of '81 when I sat on your lap asking for a Speak And Spell, a Magic Eight Ball and a "Let's Get Physical" 45. I was there, I have a laminated picture from Bamberger's to prove it.

Do you not bombard us with your festive songs and holiday movies made with delightfully animated reindeer and elves? Do Jews get to go a-wassailing? No, we have one song... about kids gambling. (And the Adam Sandler one, but kids rarely sing that at their holiday shows, though they really should.)

Has Dreidel ever starred in a delightfully animated holiday movie? Nope! Even the Rugrats sold out -- ahem -- converted.

Has Snoopy or Barbie or a single Disney character ever lit a Menorah? Maybe in the privacy of their own homes, but certainly never on camera (it's in their contracts).

We're OK with that, because we probably wrote those contracts.

Sure, we take advantage of your sales and vacations. We watch your shows and sing your catchy songs. We'll decorate a tree with blue and white twinkle lights, top it with a six-pointed star and call it a Hanukkah bush.

Santa, my Roth IRA is down 40%. I deserve a little holiday cheer. You can look me up, I've been nice, and I'd like to keep it that way.

My daughter wishes to receive an iTouch5 or 12 or whatever number they're on by X-mas, plus cash to buy useless gems for spa apps, fashion apps and Dragonvale. She also wants the newest Bratz doll, which comes complete with a Brazilian waxing kit.

My son would love anything that starts with a lowercase i, plus an iPhone 5S that he thinks will answer any question -- including where he left his last cell phone. Oh, and some alone time with my daughter's Bratz dolls.

I will forward you the unabridged version via zip file. I look forward to us all getting along!

P.S. I can be naughty if necessary (wink, wink).


(Please be aware this is a humor column, not a religious piece) 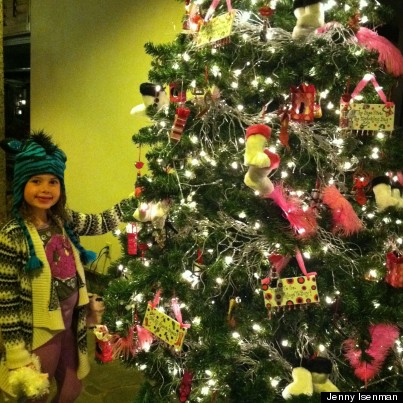 RELATED POSTS:
21 Lies Moms Tell Their Kids to Stay Sane
Wanna Look Like a Super Model on Your Next Vacation - Go to a Water Park
The Most Embarrassing Moment You Never Had in the 80's (But I Did)
Read More From Jenny From the Blog at The Suburban Jungle
Join Jenny in looking at life's little ironies on Facebook