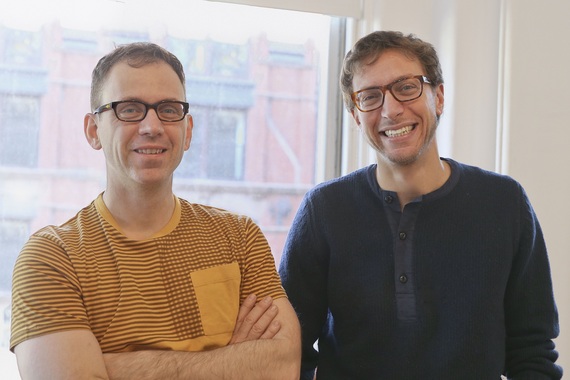 Ever heard of Colorado Island? No, there's not a floating mass mid-body of water in the middle of the country near Boulder, but Panama boasts a small island, Barro Colorado Island, populated almost entirely by scientists and dedicated to research. Not exactly a vacation destination, but writer/director Steve Cosson visited the isle as a teenager assisting on a project, and when he started exploring his latest play, the place became the jumping off point for the story.

"The way that I tend to work as a writer is to start a process by going out into the world somehow and to develop ideas by having conversations with people and encountering points of view that are new to me. And for this one, I wanted to go some place different. I wanted to get out of the city and get out of the country in a big way," says Cosson, who is the artistic director of The Civilians. The New York-based theater troupe is dedicated to what it calls "investigative theater" and explores the intersection between art and society. "I thought if I go in there and go into the heart of life and also then have all these captive scientists to talk to that something would happen."

Thus began the journey to The Great Immensity, which will premiere at the Public Theater in New York on April 11 and is scheduled to run through May 1. According to the press release, the show "is a continent-hopping thriller following a woman, Phyllis, as she pursues someone close to her who disappeared from a tropical island while on an assignment for a nature show. Through her search, Phyllis uncovers a mysterious plot surrounding the upcoming international climate summit in Auckland. As the days count down to the Auckland Summit, Phyllis must decipher the plan and possibly stop it in time."

"What would need to be done in order to get everyone in the world to live in the actual reality of our planet?" Cosson says of the question the play asks its audience. "Many of us, in all our own different ways, are in a bit of protective bubble. What would need to happen to get out of that bubble? And the next question is, now you're out the bubble what do you do?"

On his lunch break from a busy rehearsal schedule, Cosson took the time to chat about how he came up with the idea, his artistic process and how he hopes the show can change the world.

Where did you get the idea for The Great Immensity?
Initially, the genesis came from the idea of actually writing a show about a time. Melanie Joseph, who runs the Foundry Theater, and I had a number of conversations about time, and I did a bunch of reading and got interested in the fact that for the first time in the history of the planet, profound geologic scale changes are happening to the earth in our lifetime. Changes are taking place and continue to take place in terms of extinction rate, land, deforestation, and particularly the climate. We are changing this really complicated global system, and usually changes like that occur over a much longer scale of time; they would be imperceptible in the span of one human lifetime, but we are living in a time in which they are happening within the scale of a human lifetime. We have developed the technology and industrialization and really complicated modern industrial systems that can effectively change the climate of the planet, but we have not necessarily dissolved the psychological ability to appreciate what we are doing technologically. As the societies of the world develop the political means to address what we are capable of doing through our technology, efforts are being made -- but it is a game of catch up -- and the world is racing to figure out how we can change, how we need to change, and what needs to be done.

You went to this island, Barro Colorado Island, to talk to these scientists for research. What intrigued you about their work?
I was interested in scientists who work on environmental issues. In a sense, they live in a different reality than we do because in many cases. They are aware, day to day, of what's happening to the planet. And I wanted to know how they lived in that reality and essentially, knowing all that they know, does it make them live their lives differently? Do they have hopes for the future? If they do have hopes for the future, what gives them that hope? Each conversation started from, tell me what you do, and ended with, how do you get out of bed in the morning? How do you live?

You and composer Michael Friedman have also collaborated frequently, most recently on Mr. Burns, a post-electric play at Playwrights Horizons. Michael has written songs for The Great Immensity as well. How do the songs factor into the story?
It's a play with a lot of songs. Michael Friedman was involved from the very beginning. We went to Panama together, and we went to Churchill in Canada together. The music is a great opportunity to take some of the ideas of the play and bring them to life. The songs pop out of the story. It's not the kind of musical where one of the characters gets very emotional and breaks into song. It's more about an idea that is at play and then popped out into a thing of its own.

It sounds a little bit Brechtian in that way.
It's a lot a bit Brechtian. The songs remind you that you're watching a play. The most important thing to say about the music is music accesses our emotions in a very direct way, and one of the things we're trying to do with this show is to take all that which is sometimes hard to assimilate or hard to really pin down and feel because it is big and complex and scary. Through the songs and the music, you can zero on the emotional life of whatever it is that's being dealt with.

What research did you do for this play?
I did a number of interviews. We interviewed scientists in Panama and in Churchill. Part of what was crazy, but ultimately really kind of wonderful and fun about this project, is we're following our instincts. I didn't have a play about Panama and Canada when we started, but I did the research first and figured out what play this research was connected to. Certain idiosyncratic things that happened along the way or accidents or coincidences ended up working their way into the play. And there are certainly people in the characters in the play who take inspiration from real people that we met. At the same time, a lot of the interviews contributed ideas and helped me to think about the show and then those ideas made their way into the story. And the third person that we traveled with was a filmmaker named David Ford, and a lot of what we saw in Panama and Churchill shows up in projections [onstage].

What are you hoping that people take away from seeing this show?
I'm hoping for the audience to feel a sense of these environmental questions and to also be self-aware of the emotions they have about these issues. So often, the experience is you watch a movie and the movie is trying really hard to scare you into caring and convince you this is real big problem and you have to deal with it. And usually, at the end of that movie, it usually wraps it up with you can change it all if you just work really hard and you think, 'Oh god, that will never work,' and then you're scared and depressed. And I feel like I want to give the audience a different experience. I want to make something that can seem abstract, like climate change, and make it live a little bit more in the world where this is happening. And I also want them to have a sense of empowerment and participation. To understand for everyone -- whatever your life or your talents or your abilities are -- to live in the reality of this world that we do live in, we need to behave differently, is to make different choices. I would hope that audience members would in a sense digest that and think, "What part of life can I live differently in my corner of world?"