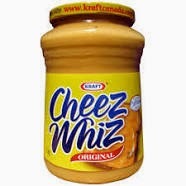 Can a self-flagellator enjoy fine French cheeses? Another way to put this would be to ask how anhedonia, which is the inability to experience pleasure, can be equated with a facility for appreciating the finer things in life? The answer is that those whose need to punish themselves results in the countervailing inability to enjoy things must be content with processed cheeses such as Cheez Whiz or Velveeta. Let them eat Wonder Bread but definitely not brioche. However, there's a silver lining to everything and if you are one of those people who isn't attuned to the finer things, you're going to save a lot of time and money. You won't need to find the cheese store with the right Reblochon, Saint-Andre or Vacherin and you can partake in the good deals on economy-sized jars and loaves of the processed stuff that are available in discount clubs like BJ's. There's also something very cozy about living a life in which nothing is really pleasing. You go into diners where much of the food tastes the same and you learn to commiserate with other lost souls who are refuges from varying forms of haute cuisine, which, in fact, may have led to their downfall. In previous periods of their lives these one-time parvenus may have had pretensions to living the good life and aspired towards buying the right cheeses and naturally wines to accompany them and blown a wad attempting to gratify those appetites. The trophy husbands and wives who bleed you dry go along with all this cheese loving. Such social rising is where sexy photographic poses like the cheesecake derive from. Let's say your self hatred has ratcheted up to the point that you've lost everything and the only place you can afford to eat is a lousy diner which serves things like hamburgers and BLT's. You'll at least be able to thank the stars for one thing. You won't end up cutting the cheese.