To our Western eyes, the pit latrines at Byimana Primary School looked like a set of brick ruins -- without roofs, open to the sky and weather, absent doorways, massive holes in the side walls -- leaving any user embarrassingly exposed. In fact, the crumbling shared-sex latrines, unsupervised and set apart from the school building, was a perilous place for a young girl and the future of her education. 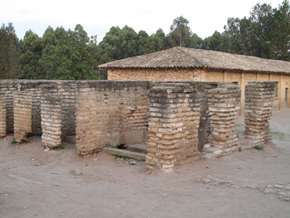 Across poor communities globally, when a girl reaches the age of menstruation, a lack of access to sanitary facilities at school can completely undermine her academic performance. On this International Day for the Elimination of Violence Against Women, we'd like to call attention to one of the most disturbing underlying issues involving sanitation access at school: violence against girls.

In 2007, Médiatrice Mushimiyimana, a primary school English teacher in the rural village of Byimana, Rwanda, observed that once girls reached puberty, their attendance plummeted along with their ability to keep up in class. She states, "I realized that maybe the problem is that [they] don't feel safe at school..."

Médiatrice and her colleagues conducted a survey and found that 72% of the boys had seen girls without their clothes on, of whom 50% had watched girls in the latrines, and 19% had admitted to taking clothes off girls by force.

They discovered that for a schoolgirl, simply attending to her daily needs in the open and remote latrines placed a girl at risk of spying, harassment, sexual coercion and even sexual assault. Further, the latrines lacked soap and water, so girls that were too poor to afford sanitary pads stained their uniforms during menstruation. If called to the chalkboard, a girl became an instant target of widespread bullying.

Most youth had absolutely no understanding of sex, reproduction or how their own bodies functioned. Many girls had never spoken to their mothers about menstruation. Instead, throughout sub-Saharan Africa and parts of Asia, there is a growing body of evidence that menstruation in schoolgirls is associated with powerful feelings of shame, fear and confusion. Girls either suffer in school distracted and worried, or simply stay home one week each month. Many fall behind and eventually drop out, increasing their risk of teen pregnancy and perpetuating the cycle of poverty.

In 2007, less than 15% of Byimana Primary School girls passed the national exams necessary to matriculate to secondary school.

Médiatrice banded together with 34 colleagues, determined to fight violence against girls and liberate them from stigma. They created an organization they named "Think About the Young Girls" and applied to Global Grassroots' Academy for Conscious Change to learn how to start a small non-profit to launch their idea.

Global Grassroots identifies vulnerable women and girls who have ideas for social change. Our Academy is a social venture incubator integrating mind-body trauma healing for PTSD, mindfulness-based leadership skills, and non-profit development tools. We provide 18-24 months of training, high engagement coaching and seed funding to help these female teams develop a sustainable "micro-NGO" of their own design to address a key social issue facing women and girls.

With our training, coaching and an initial $3000 grant, Médiatrice and her team began by teaching 900 youth, parents, teachers and community members about menstruation, sexual development, hygiene, and gender violence, and formed two anti-violence youth clubs. Next they built new, safe latrines to serve 635 girls.

Halfway through the construction, they faced a funding shortfall due to the rising cost of bricks and had to stop construction. The teachers resourcefully salvaged bricks from the old crumbling latrines, raised the gap in funds from the local community, and finally completed the toilets. They further went on to build a washroom and bathing facility complete with water tank, then stocked the facilities with sanitary supplies and soap. 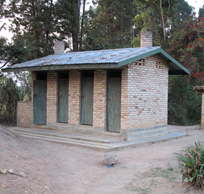 Today at Byimana primary school, girls report that teasing, harassment and sexual attacks are a thing of the past, and they can finally focus on their studies. Parents who had rarely, if ever, discussed menstruation with their children, now recognize their daughters' pressing need for information, emotional support and a way to maintain good hygiene. Restaurant and bar owners have become more concerned about the safety of their female patrons. Boys in the youth clubs brainstorm ways to tolerate sexual impulses; girls acknowledge the pitfalls of entering into early sexual relationships and teen pregnancy.

Médiatrice, since promoted to headmistress at a neighboring school for her demonstrated leadership, explains, "I just feel proud that there is something that I thought - and then I did - and then succeeded."

On this International Day to Eliminate Violence Against Women and Girls, let us celebrate the power of women, like Médiatrice, working courageously at the grassroots level to get at the roots of violence, poverty and vulnerability for a better future for our girls.

To date, Global Grassroots has trained over 500 change agents from Rwanda, Uganda, Cameroon, Liberia, the Democratic Republic of Congo, US and China who have designed over 60 community organizations serving other women and girls. Find out more about Global Grassroots: www.globalgrassroots.org