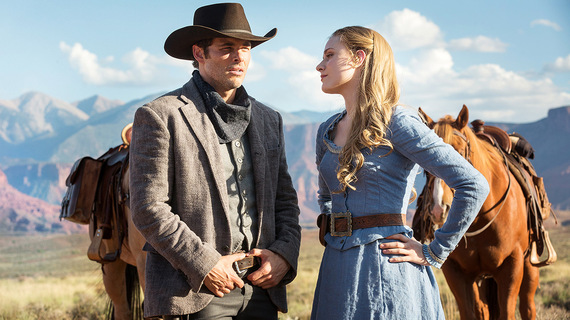 Dolores and William cling to one another as they try to escape an encampment of Confederados, brutal mercenary soldiers. Even as a contingent of these bandits closes in, the two characters gaze into each other's eyes, and time seems to stop. William holds Dolores' gentle and mechanical face, gazes at her soft blonde hair, and then kisses her.

For this brief moment we, the audience, forget that Dolores is one among a thousand Westworld androids called hosts. We suspend disbelief as we gaze on the outward affection between the two. We forget that Dolores' emotions are nothing more than artificial intelligence at work. But are they? Is the story of Dolores and William merely a generic romance, or is it a reflection of how humanity and artificial intelligence might coexist ? Can the television drama teach us something about love and our relationship with technology?

Anything is possible in the Wild West theme park where guests pay handsomely to fulfill their fantasies with hyper-realistic androids. The androids play typical roles--the gunslinger, the saloon keeper, the bordello madam. Their consciousness and even their word choices are generated by algorithms so finely tuned that we forget that the hosts are just sophisticated machines.

William particularly has difficulty forgetting this in early episodes. He tries to protect Dolores, perhaps out of a masculine need to be the hero and save the damsel. Perhaps looking out for her, spending increasing time in her company, and eventually going so far as to kiss her is the right and logical conclusion of an emotional trajectory that was set in motion the moment William first entered the park.

One definition of love is an intense desire for emotional union with another. It is the spellbinding quality that creates the glitter in Juliet's eyes that prods Romeo to sing. All of us have all seen and possibly felt the obsessive pull of another, the draw of a potential beloved. But does love's requirement of "another" mean that the other must be a human being? What about the love felt towards a pet, a work of art, a political cause, even an ideal֫--or in William's case a machine that faithfully replicates human behavior, speech, and affect?

The Turing test might be a good place to start. As a test of intelligence it asks whether a person can distinguish a machine from a human being using only the replies to questions put to both. Pass the test, and you are presumably dealing with a person. Fail, and the other "person" must be a robot.

The alluring feature of Westworld is that it is almost impossible to tell who is who. And that is exactly what visitors pay $40,000 a day for. In William's case Dolores easily passes the Turing test. Despite knowing at the outset the false nature of the theme park, he isn't deterred from falling for Dolores.

Even though she is made of metal and silicone rather than flesh and bone, Dolores still induces William to fall in love. And this is key: love comes from within. It is always an internal response within the lover rather than contingent on any external qualities in the beloved. William is smitten. Delores' programming likewise makes her want to be with him, too.

We watch the same physiological and psychological urges play out in the simulated world just the way they do when real people fall in love. Perhaps, then, we shouldn't judge too quickly those who have found a satisfying emotional bond that fails to fit our personal concepts of what love should be. What Westworld teaches is that love is not a strictly defined convention, but a spectrum of possibilities.