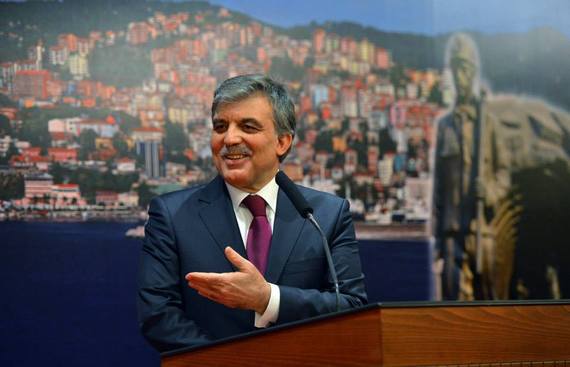 Officially, he'll have no role in either Turkey's government or in the Justice and Development Party (AKP) that his successor, Recep Tayyip Erdoğan, leads and that Gül himself co-founded with Erdoğan in 2001.

Erdoğan's victory in Turkey's first direct presidential election on August 11 cleared the way for his plans to transform Turkey's government into a presidential system, the culmination of years of gradual centralization since Erdoğan first became Turkey's prime minister in 2003.

Though Erdoğan will officially step down from any formal party and political role, he has made clear that he expects, unofficially, to direct both party and policy from his new perch at Çankaya Köşkü, the Turkish presidential palace, as the powerful leader of what he calls the "new Turkey." He'll do so at first as a de facto leader. Late last week, the AKP chose Ahmet Davutoğlu, Turkey's foreign minister since 2009, as its new AKP leader and, accordingly, Turkey's new prime minister. In that role, Davutoğlu is widely expected to follow Erdoğan's lead in governing Turkey.

That leaves Gül, perhaps the only figure in the AKP more popular than Erdoğan, as one of the few people in Turkey who have enough political strength to stand up to his successor.

A year ago, the conventional wisdom was that Gül would trade places with Erdoğan and become prime minister, an office that Gül held briefly during the first four months of the AKP's government. When the Islamists first won the 2002 elections, Erdoğan was still subject to a ban on his involvement in politics that the new government soon lifted. When Erdoğan subsequently became eligible for the premiership, Gül became Turkey's deputy prime minister and foreign minister, launching Turkey's accession talks with the European Union in 2005 and asserting a greater Turkish presence in the Middle East.

Despite some controversy over the rise of an Islamist to the Turkish presidency, Gül easily won the vote in Turkey's National Assembly in 2007. As head of state, Gül generally observed presidential impartiality, though he courted controversy when he became the first Turkish president to visit Armenia and condemned Israel after it attacked an aid flotilla destined for Gaza in 2010.

But Gül also chided Erdoğan's response to 2012 protests, which began over plans to build a new mosque in place of Gezi Park in downtown Istanbul and grew to encompass the growing authoritarian manner of Erdoğan's government. In particular, Gül directly criticized police forces for the brutality deployed against largely peaceful protesters. Gül further argued that democracy requires liberal freedoms and the rule of law, comments that further distanced Gül from Erdoğan. Gül also strongly resisted Erdoğan's short-lived attempt to restrict Turkish access to Twitter in the prelude to March's local elections.

Despite Erdoğan's presidential victory, Turkey remains polarized over his leadership. Critics argue that Turkey is moving away from European-style democracy toward a more centralized style more reminiscent of Vladimir Putin's rule in Russia. Though many moderates and secular Turks welcomed Erdoğan's rise over a decade ago, when he effectively thwarted the corrupt secular leadership that ruled in tandem with a coup-prone military that routinely harassed political Islamists. But they increasingly worry that Erdoğan is so completely consolidating power that he's becoming an arguably larger threat to Turkish democracy.

Gül has indicated his disapproval of Erdoğan's plans and, in his farewell address as president, Gül pointedly defended his impartiality, decried political polarization and otherwise emphasized his commitment to the rule of law, press and personal freedoms, the impartiality and independence of the judiciary and a secular state balanced by the freedom of religion.

Gül has also stated his intention to rejoin the AKP in his post-presidential career, where he could balance Erdoğan's authoritarian tendencies as an alternative center of political power. But the AKP's leadership contest was scheduled for last week, well before Gül stepped down from the presidency, thereby precluding him from contesting the leadership and Turkey's premiership. That decision followed of increasing frostiness from Erdoğan loyalists that's earned the wrath of Gül's wife.

Erdoğan's further decision to limit AKP officials to three terms in government is widely viewed as a move to promote a new generation of leadership that's less likely to challenge Erdoğan's grip on power -- the rule could prevent 71 AKP deputies from running for reelection in parliamentary elections that will held before June 2015.

It also means that many moderates allied with Gül have left government or will soon be leaving it. Nevertheless, one key Gül ally who's likely to stay is Ali Babacan, the deputy prime minister credited with engineering Turkey's strong economy. As Erdoğan pushes for constitutional reforms, the country's reputation in international markets still depends on the presence of competent managers like Babacan. There may yet even be a role for Gül in the Davutoğlu government, possibly reprising his role as a respected foreign minister, which could reassure anxieties about Erdoğan's presidency. Conversely, it's also possible that Gül could form a new democratic Islamist party to challenge Erdoğan.

There's reason for Gül to be wary, because Erdoğan has a record of eliminating opponents with a mix of paranoia and effectiveness. After consolidating power last decade, Erdoğan launched a series of trials against former military brass, opposition politicians and even journalists, all of whom he alleged were part of a shady conspiracy group known as Ergenekon. In the past two years, Erdoğan has expunged many of the followers of the Pennsylvania-based cleric Fethullah Gülen, once a close ally, from Turkey's civil service and other institutions after Gulenists inside the government exposed corruption, forcing several embarrassing ministerial resignations.

In the meanwhile, Davutoğlu, who directed Turkey's somewhat uneven foreign policy overtures in the last five years in Syria, Iraq and Europe, will lead the AKP's campaign efforts in next year's elections. Following Erdoğan's victory this month and the AKP's narrower victory in local elections earlier this spring, Davutoğlu is favored to lead the Justice and Development Party to a fourth consecutive mandate, even though he lacks Erdoğan's commanding presence. Even if he led a perfect campaign, it's unlikely Davutoğlu can win the two-thirds majority Erdoğan needs to push constitutional reforms directly through Turkey's parliament. More likely, Erdoğan will call a special referendum simultaneous to or, shortly after, the coming elections designed to give the president stronger legal powers.

Between now and those elections, however, the most critical question for Turkish democracy is what kind of role Gül sees for himself in the "new Turkey."

Kevin A. Lees is an attorney based in Washington, D.C., and he is the editor of the global electoral politics website Suffragio.org.