An important report from the European Commission suggests that if Africa could begin to adopt waste-to-energy electricity production, the technology could provide electricity for 27 million African families by 2025, a notable improvement for a continent where almost 900 million people (out of 1.1 billion) have no access to grid-distributed electricity.

Africa has plenty of trash -- with much more coming as its middle class grows -- but it currently has only a few waste-to-energy plants, and to date, only the largest African cities have comprehensive waste management systems that could feed into such systems efficiently.

The rest of the world is way ahead. Europe has 472 plants and the U.S. has 86 plants in 23 states that together process 96,000 tons of waste daily (more than 30 million tons a year), creating 2,769 megawatt hours of power every day while also recovering 730,000 tons of ferrous metals for recycling annually. Some plants even sell steam directly to end users to create a revenue stream. In the U.S., Connecticut is in the lead in terms of the percentage of municipal solid waste burned -- about 67 percent -- while worldwide, space-constrained Japan is out front, avoiding excessive landfilling by incinerating nearly 80 percent of its solid waste. 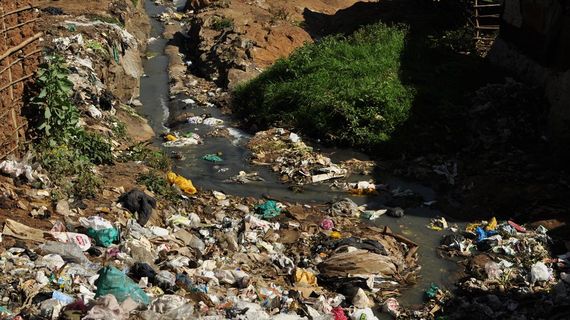 Trash is piling up across Africa, especially in urban areas such as Kibera, a slum outside Nairobi, Kenya. (Source: Brad Ruggles. Creative Commons BY-NC-SA)

As for greenhouse gas emissions and the threat of global warming, the E.P.A. has conducted life cycle emission analyses that show waste-to-energy facilities actually reduce the amount of greenhouse gases expressed as CO2 equivalents in the atmosphere by approximately one ton for every ton of municipal solid waste combusted. There has been little environmental push back as new plants have come online, in part because there's a general understanding that methane, which is generated in landfills as waste decomposes, is an even more damaging greenhouse gas on a pound-for-pound basis than CO2.

There's no doubt the demand for electricity will grow dramatically in Africa as living standards rise, but seeking out new energy sources isn't just about powering big refrigerators and TVs. It's also important to alleviate "energy poverty" in countries the European Commission says have especially low access to electricity, places such as Central African Republic, Burundi, Guinea-Bissau, Mali, Sierra Leone, Rwanda and Somalia.

What the study doesn't address is the cost. "Cost is a major driver for decision making in the field of energy systems; nevertheless, adding the cost issue to the present analysis would have introduced a large number of additional variables also affected by large uncertainties and would have blurred the overall picture," the report states. In other words, while waste-to-energy may be a great idea for Africa, it will ultimately be up to governments, perhaps in concert with the private sector, to figure out how to foot the bill.