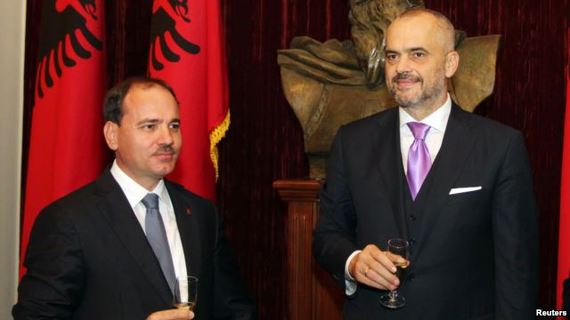 Situated on the east of Europe, Albania applied for membership of the European Union in 2009. As the poorest country in Europe and designated the most corrupt, there is a lot of work to be done before this country of 3 million people is accepted into the Union. A recent visit by US Secretary of State John Kerry does indicate that this work is well underway. But Albania's efforts to reform and strengthen its political, security, judicial and civic institutions after years of dictatorship, could be drastically undermined if the country ignores or underestimates the threat posed by the arrival of the Mojahedin Khalq (MEK) from Iraq.

Albania is the target location for the transfer of the notorious terrorist organization Mojahedin Khalq into Europe. Currently based in Iraq, the MEK is now being transferred to Albania under a deal struck with America in 2013.

Since the 1980s the MEK were paid and trained in terrorism by Saddam Hussein to effect regime change in Iran. After his ouster in 2003 the MEK aligned itself variously with the US army - during Senator Kerry's visit to Albania, the MEK was described as "a group that has supported the US in military operations in the Middle East and in its fight against terrorism" - as well as former Saddamists headed by Ezzat Ibrahim and more recently Al Qaida insurgents and Daesh in Iraq. Each successive government of the newly sovereign Iraq tried repeatedly to evict the group from their country, but the MEK leader Massoud Rajavi - himself a fugitive from justice - ordered his followers to put up violent resistance.

Even if they would agree to go willingly, the United Nations refugee agency has struggled to find third countries to take them in. It seems that, although Western countries have benefitted openly from the MEK's sometimes violent anti-Iran activities, and found the group particularly useful as a thorn in Iran's side through the period of nuclear negotiations, the MEK is deemed too dirty for them to willingly host any of them even as refugees.

In an attempt to encourage other countries to take some of the MEK, former Secretary of State Hillary Clinton persuaded the then Albanian Prime Minister Sali Berisha in 2013 to take just over 200 MEK members on humanitarian grounds. That process got underway, but in 2016 Albania is now expected to take up to 3,000 MEK after the President of Romania, Traian Basescu, refused to take them in 2014.

This agreement has attracted surprisingly little attention from either inside Albania or even from a world media sensitive to terrorism and organized crime. The reason is partly because the transfers are taking place in small groups of around twenty at a time in a piecemeal fashion as the UNHCR is forced to defer to Massoud Rajavi's demands in order to circumvent threats of violence. Rajavi hand-picks the members he allows to be transferred, many using false identities. He ensures that each group of ordinary MEK members is accompanied by minders and enforcers to keep them under control and prevent them breaking loose. In order to accomplish their mandate to remove the MEK from Iraq, UN officials have had to accede to transferring the refugees under such conditions even though it reinforces the concept that the members belong to the MEK in conditions of modern slavery.

Once they arrive in Albania, the MEK leadership takes charge of the transferees. Although the US made a donation of $20 million to the UN refugee agency to help resettle the MEK, and according to a State Department official the US has provided the Albanian government with "security and economic development assistance, to help the country build up its physical capacity to house the refugees", none of this benefits the individual refugees. In Tirana the MEK has purchased an abandoned university campus into which it has corralled the new arrivals and recreated the conditions of isolation and cultic control which have always prevailed for the membership. What started out as a humanitarian gesture has turned into the mass relocation of a terrorist group to Europe. The MEK has created a de facto enclave in Albania which is outside the law, just as they did in Iraq.

This has put the refugees out of the reach of the Albanian authorities and because they are not free to mingle with Albania's citizenry, the influx of over a thousand trained terrorists has cleverly avoided detection and therefore controversy.

However, even though it appears that the MEK are somehow quietly contained, the citizens of Albania are entitled to ask whether the new refugees pose any actual threat to their civic life, to their security and to their ambitions to accede to membership of the European Union.

To answer this, we must ask why the Iraqi government is so desperate to expel them and why other Western countries are so extremely reluctant to accept them.

As a violent criminal organization, the MEK thrives where the rule of law is weak - in countries like Iraq and Albania which are emerging from past turmoil and troubles. In such conditions the MEK can be dangerous through criminal activity and violence.

As expert propagandists and manipulative persuaders, the MEK leaders have no problem making connections with and bribing government officials, power brokers and media types - let's be clear, the MEK has always been well financed. Former MEK have also reported that the MEK leaders are already vigorously pursuing links with Albania's mafia-like gangs. The MEK will work with these gangs for mutual benefit as they did with Saddam Hussein's regime. In the long run, if the MEK organization does become established Albania - with the quiet collusion of political circles who benefit from the cult's track record of terrorism - they will be better placed to do from Tirana what they can't do from Paris.

The CIA characterizes Albanian corruption as a 'transnational' problem involving drugs, money laundering and illegal aliens. In this sense it is the very location of the country which makes it attractive to international criminal organizations and thereby creates huge problems for law enforcement agencies. Albania essentially acts as a gateway into Europe from the rest of the world.

Now, while the various routes to Turkey, Syria and Iraq are under stringent scrutiny, terrorist commanders from any mercenary group can slip beneath the radar and seek training and logistical support in Tirana. What better location to establish a clandestine terrorist training camp than in Albania? It is in Europe, but not in the EU and therefore not so open to scrutiny by the international community.

With the changed political mood following the nuclear deal between Iran and the P5+1, the MEK is looking for new friends and benefactors. The group has already aligned itself with the Syrian Free Army and has offered to help the Saudis fight against the Shias in Yemen. The MEK has over forty years of experience in terrorist activities. The real danger posed by this group is not only that they can re-arm themselves in Albania, but they can invite other groups in for training.

The worry is that the MEK has branched out and is open to do business with any terrorist group.

It is impossible to ignore the fact that MEK members are radicalized to the core. They are not ordinary refugees. Enough of them have been trained in Iraq by the former Saddam regime for terrorist activities as well as forgery, intelligence, military operations and even torture methods, to make them extremely dangerous. Above all, the nature of the MEK leadership style is cultic. This means the followers are not able to resist the orders of the leaders even if they wanted out. So there is a danger they will be used for a variety of criminal activities without their real consent. There are already examples of people trafficked by the MEK from Albania to Western Europe and used for money laundry activities in Germany.

However, the refugees could also be described as extremely vulnerable. Another reason they have not attracted attention is that the MEK can easily be dismissed as a defunct fighting force; the average age of its fighters is sixty years old and many of them are ailing with mental and physical disease after years of punishing training in the Iraqi deserts. But while this is true of the majority, there are still many among them who are expert terrorist recruiters and trainers, people who know how to train others for suicide missions; strangely transferrable skills in today's world of global terrorism.

Not all the members who arrive in Albania do stay with the MEK. There is a growing community of formers - around two hundred to date - who have turned their back on the group and want to return to their families and to normal life. Interestingly, it is from this pool of former members that the US has carefully selected a quota of eighty individuals to be given asylum in America. They have undergone rigorous interviews to ascertain that they have completely rejected the MEK and so no longer pose any danger. Some others have been accepted by other European countries under the same conditions but the rest remain in Albania under conditions of hardship.

With the stakes set very high, Albania's authorities will need to stop this organization from covertly establishing a terrorist base in Europe. The first step would be to remove the MEK members from the source of their radicalization. If this doesn't happen, the problem will simply have been moved instead of being solved.

The authorities in Tirana can ensure that all the newly arrived refugees are treated as individuals, not as belongings of the MEK leader. They should be given protection and helped with accommodation and financial support as people entitled to determine their own future paths. Experience in Iraq has already shown that once these people are physically removed from the coercive atmosphere imposed by the MEK leaders and reinforced by their peers, they very quickly find that their commitment to terrorism evaporates and the de-radicalization process can begin.

De-radicalization is greatly helped when they have contact with their families. There are numerous examples of former MEK who managed to leave the cult and establish new and successful lives. Some now live in various western European countries because they have family there who have been able to help them. Some have returned to Iran - even though Iran doesn't want them back - where they have been granted amnesty and lead normal lives under the supervision of the UN and ICRC. Some others now live in Iraqi Kurdistan and have transferred their family assets there from Iran there so they can set up in business.

Once they are out of the 'pressure-cooker' of the cult their lives can be sorted out through humanitarian organizations. As a Red Cross official told the authors, 'As individuals, three thousand is nothing, we sort out millions every year. But as a group, neither us nor any other organization can deal with or help them.' It is a choice the Albanian government cannot ignore, for to do nothing is to risk everything.