This is where Foodstand, which is avaialble on IPhone, Android, and web, enters the picture. Their goal? To bring previously disparate groups of consumers together under the good food umbrella. It's something we often forget, but behind these millions of #food photos are individuals, and individuals on social media, at the end of the day, are using the media to forge social connections. It's Foodstand's goal to connect these food-lovers, makers, and growers.

So, beyond the general aim, how does Foodstand work? Through the mobile app and companion website, disparate communities can connect virtually, to allow anyone across the world to easily access and understand what's happening in good food. "We are a community helping each other stay in the know about all things good food so more people can harness the power of the movement to shop, cook, and eat better," said founder Rachna Govani. So, instead of relying on your one friend who's a healthy, conscientious eater, you can turn to the virtual community. As Govani continued, "The digital platform helps us connect more people at scale. For example, everyone has a good food friend who they turn to; the digital community is thousands of those 'good food friends' at your fingertips."

As a daily user, you'd turn to the app as a place to share images of food that you'd otherwise share on Instagram or Facebook, along with reading or sharing articles relating to everything from what to do with watermelon radishes to information about food policy, to looking up recipes for any meal of the day, joining forum conversations on food-related topic, and even invitations to live events in major cities. As intimidating as articles on watermelon radishes may sound, the app is not just for serious food enthusiasts. Because of the wide range of content within the app, its open to the entire cross section of the food-loving community, including chefs, suppliers, bloggers, entrepreneurs, food enthusiasts, and those just looking to share good eating inspiration with others.

Govani says that she founded Foodstand (along with Purpose, a social benefit digital movement-building corporation) after realizing a few things:

In light of these revelations, Govani founded Foodstand with the mission of democratizing good eating by creating a more informed and connected community of eaters and makers who are interested in seeing a better food future.

One unique element that the app offers is the "Good Food Spotlight," which allows users to step out of the digital realm of Foodstand, and into the real world.

On a chilly evening in January, I got off of the subway at the G train Flushing stop in Brooklyn, New York. I exited the station and proceeded to walk three-quarters of the way around a huge building that spanned most of a block. As I strolled, I was lead along by printed signs with arrows drawn on them, pointing the way towards the event I had read about on the app, a recurring "Good Food Spotlight" event hosted by Foodstand and its collaborator Slow Money NYC.

I entered through the main set of doors of Brooklyn FoodWorks and went upstairs to the event. The room was a small and cozy space with somewhere around 70 people milling around. Against one wall was a spread of local food from the organization Local Roots NYC. Against another was a range of items from all over, including Ginjan, a West African ginger juice, an assortment of breads from Lancaster Food Co, which hires directly from their community in Lancaster, Pennsylvania, to help lower the poverty rate, a dairy-free coconut-based ice cream from Jawea, and Metabrew, a health-focused energy drink. Along the final wall was a large glass window, through which I could observe the large industrial kitchens that Brooklyn FoodWorks uses to prototype, launch, and grow innovative food businesses. I leaned against the wall, snacking on TK, and listened to presentations from food entrepreneurs and experts as they discussed their burgeoning "good food" businesses. 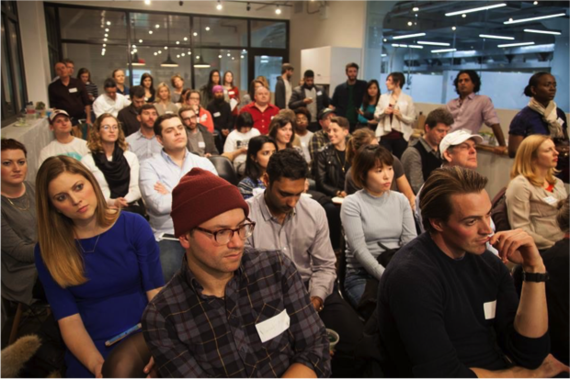 After these presentations, some of the audience began to trickle out, but many attendees remained to discuss business strategy and other food-related matters. As I wandered the venue, I overheard conversations like two companies working with Indian manufacturers who were considering a collaboration and a food distributor speaking with the head of an organic bread company about how they could use leftover bread to make breadcrumbs rather than wasting them. 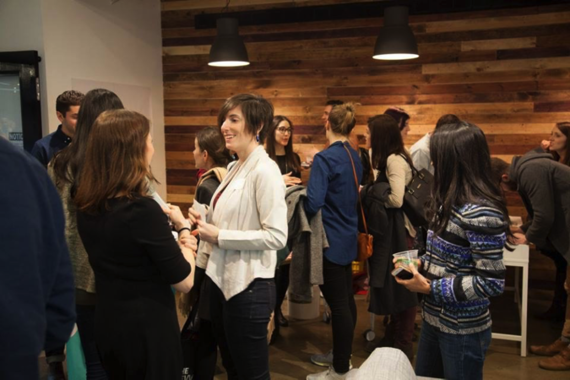 Following the event, it was clear to me that Foodstand had many different elements, both in the virtual world and the real word. I asked Govani what her vision was for Foodstand going forward. She replied: "The future food system that we want to create is one in which good food is the default and the easier choice, instead of the exception." After reaching out to some of the app's users, it seems that her goal may be succeeding.

Justin Aiello is the Farm Manager for Olivette Farm in Asheville, NC, who found out about Foodstand from a friend who was a food writer in Atlanta, GA. So how did Foodstand impact him? "As a farmer it is very important for me to keep up with upcoming food trends as well as new and exciting ways to use the vegetables that I grow," he told me. "The Foodstand app has been an awesome resource to not only see what people are eating and cooking, but it has also been a great place to ask lots of questions about what people are looking for from their farmer. In addition to that, the app has been a great tool for me to help educate people on new ways that I have discovered to use vegetables and it has also given me an opportunity to give people some more insight into the world of farming and where their food comes from." To him, the app feels like an intimate community of people who really care about food and just want to share everything they are learning about it.

On the northern end of the country, there's Jabber Al-Bihani, a Brooklyn-based civil engineer who works as a food experience creator and entrepreneur in his free time. He has been using Foodstand since the beta version of their app launched a bit over a year ago. He runs a startup called Komeeda, a platform for restaurants to create interactive dining events at their establishments and to get these events out to what they're calling the "kommunity". While Al-Bihani had initially valued the community aspect of Foodstand over the functionality of the app, itself, he's found that the newest release of the app has both community and functionality. "This version is the digital analogue of the real community and is something I use more frequently now because of its forum type platform and the more engaged user-base within the app," he told me. He uses the app to connect with local chefs, event coordinators, and artisan purveyors on Foodstand who want to collaborate and participate in Komeeda events.

Another New Yorker, Beth Reed is a food enthusiast who first heard about Foodstand at the Food Book Fair in Brooklyn last spring. "It seemed like a perfect match for me. I love food, I love technology and I love to share great recipes, ideas and basically talk about food all the time!" she shared. "It has been great to watch Foodstand grow, going from their Beta version, basic picture sharing, to more interactive features and now a true community where you can post, share, comment and engage in food related discussions. It's like you are at a coffee house chatting with the locals about all things foodie, except you do it from any and everywhere and at your own speed." While she first was drawn to Foodstand as a way to direct traffic to her blog, it soon became relevant for more than that. Now, she looks forward to the discoveries she makes on Foodstand and the food it inspires her to cook.

In a world where many people focus more on getting a great photo of their dish than knowing what ingredients it's composed of, it seems like the Foodstand's role in the digital good food movement is more important now than ever. Current Foodstand users and event participants make it clear that there is the desire for such a counter-movement out there. Only time will tell whether Foodstand can make a true difference in food culture, or whether we'll be stuck with #foodporn brunch dishes for eternity.