I am an only child.

I didn't have an older sister to steal clothes from or an older brother to protect me. Nor did I have a little sister to dress up or a little brother to harass. It was just me and my unhappily married parents.

In some ways, not having a sibling was OK. I never had sibling rivalry, never had to wait my turn and never had to put a sibling's wishes above my own. But I didn't see it that way when I was young. I yearned for a sister or brother.

Recently, after speaking to a friend who is also an only child, I had an epiphany -- 35 years in the making. I realized that it was my family dynamics, not the lack of a sibling, which caused my angst. As my friend spun tales of "Three Musketeer" trips to Europe, delicious crepes and fine dining with her parents, I nodded and listened to how nice it sounded to be her when she was growing up.

Until I stopped her and said "wait... that is not what I lived through!"

My parents fought for as long as I can remember. It was bad. They divorced when I was in high school after a long time of staying together "for the family." I realized as I was having this conversation with my friend that maybe the desire for a sibling was actually my longing for a normal, happy family (which we have now, many years later).

I was shocked. How did I not see that?

My epiphany totally rocked my thought process and it jumpstarted me into thinking about giving my daughter a sibling of her own. My husband and I always spoke of having more children. Our first was getting older and I was approaching the dreaded 35. We needed to get our acts together. I was excited to expand our family, but also a little nervous.

Since I am an only child, how would I know how to have two children? Luckily, most of our friends had their second kids by now, so we were easily able to observe them. It seemed pretty basic. The bottom line is this: you love the other kid too. Pretty easy. Yes, yes -- a second round of sleepless nights, diapers and all the "baby" stuff you would expect. But as far as this overarching fear I had of "another," it didn't seem to plague my friends as it did me.

We began gearing ourselves up to tell our daughter she would be an older sister in October. As expected, she was beyond thrilled. We were giving this little munchkin -- who is the epitome of a little girl -- her own, real-life doll. "Excited" was the understatement of the decade.

Over the last few months, our daughter has declared that she will be in charge of night feedings, diapers and pushing the stroller (rock on, we're going to hold her to these!). She also has shown a tremendous amount of empathy by saying how she wants to pass on her clothes that no longer fit and the toys she no longer plays with to her new baby sister Chloe (no, we do not know the sex, no Chloe isn't on our short list). Last week, she told me she will come to the hospital to take care of me, and -- when the baby is born -- introduce it to our family. Today, she said that she will give the baby her most beloved doll so the baby can have a doll filled with her love. I almost cried.

This child, this 3 1/2-year-old, is already filled with so much love for her sibling and they have yet to meet. I admire her tremendously for this. I wish I had as much assurance as she does. I wish I knew how I would handle two when my world has been so focused on one. How will I take sides, choose which one gets their way without offending the other, be an impartial juror? How do I understand the daily sibling tangles?

The answer is this: I simply just don't know.

I guess just like when you have your first -- and it hits you like a pile of bricks -- you figure it out and do your best.

The books say not to compare your children, to let each child shine in their own way and that your heart does expand to give each 100%. I keep reading because I'm scared. I have no frame of reference for a sibling in my life and it seems in this case, I'll have to follow my daughter's lead, loving unconditionally, sight unseen, and just open my heart and share everything I have in there -- even my dolls -- with both children.

I realize in the end, the one thing this family has going for it that my family did not is my husband and I are in love. We're partners. We actually like each other (94.5% of the time) and like to do things together. So, I think we'll make it. One day, we will also go on those "Three Musketeer" trip, but as Four or Five Musketeers. Same idea, just a few more crepes. 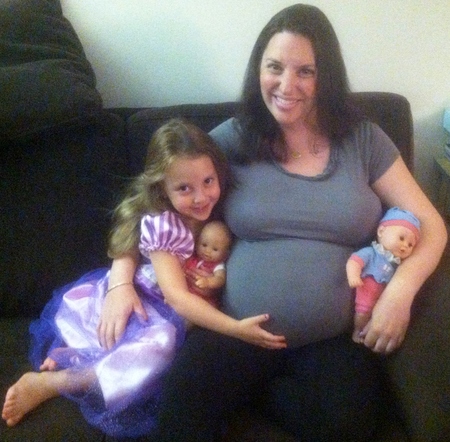