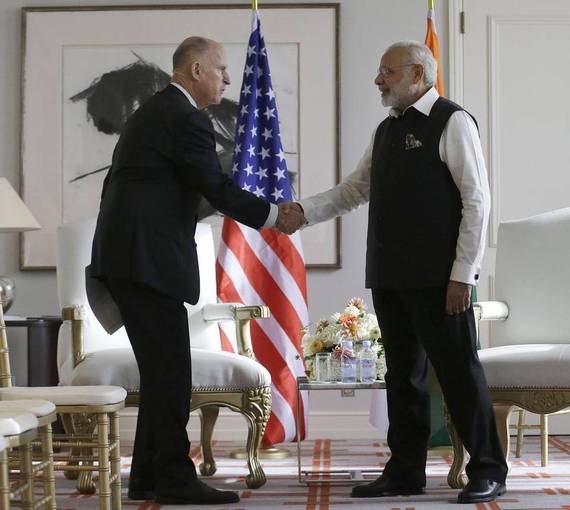 When it comes to the politics of climate change Sacramento must become the new DC.

After much hand wringing, weeping and gnashing of teeth climate hawks will watch the equivalent of a funeral for federal climate action January 20th. There is no hope, no optimism to be found in the depths of Mordor on the Potomac. Because while clean tech markets will continue to transform our world the importance of high-level political signals be it in Paris or DC have an intangible and utterly fundamental importance. We just lost that bat signal for at least four years and Trump will do his level best to steal the last eight back as well.

But since time is the only variable that truly matters we can't sit by and simply accept this loss. We have children and grandchildren we will need to face. Which is why we need to go on the offense and not get distracted by the hordes at the gates, or lunatic ravings on twitter. We can do that by taking progress to the states, cities and the private sector to create a new pole of power, a new center of climate progress. A new Washington DC.

Sacramento Is The New DC

California is the fifth largest economy in the world home to a majority of American solar home systems, a power grid that is drenched in solar and wind energy helping it to rapidly exceed its 33% clean energy target, and quietly driving an electric vehicle revolution accounting for 50% of national sales. It is also an engine of innovation and prosperity and home to the world's most valuable company, Apple,which just led the Greenpeace Clean Energy Report for the third year in a row. Retreating to California, pulling up the drawbridge at Donner pass and preparing to launch strategic incursions is not a retrenchment, it's a power move.

More importantly California's leaders are not reluctantly rising to the occasion, they relish the opportunity. Reaction in the halls of Sacramento to inaction on climate has been quick and decisive. From the governor through to the legislature the entirety of California government ain't going backwards. Perhaps most importantly it was visceral - Sacramento knows what is at stake. Oh and did we mention they have a Democratic supermajority in the state Legislature?

But outside of knee-jerk reactions to medieval scientific witch hunts how can Sacramento truly step up and make good on their climate progress? By taxing the bad stuff, exporting the good stuff, and filling the vacuum of leadership at both the national and international level.

Let's start with the clear and present opportunity - AB32 and now SB32, the Global Warming Solutions Act. The ground-breaking passage of SB32 in 2016 which established the 2030 goal of reducing emissions 40% also includes the authority to adopt ambitious policies ranging from zero emission vehicles mandates to low carbon fuel standards. It is the ambitious policy response to the threat climate change poses that you wish Washington had. Combined with the innovative pilots California utilities are now deploying to build out electric vehicle charging infrastructure it helps to redraw political faultlines, the 'power around power.' A shift that weakens fossil fuel commodity providers (oil, and coal companies) by providing utilities a way to benefit from the transition.

Next up - pricing carbon. Last year with SB32 Gov. Brown came tantalizingly close to fending off attacks to his landmark cap and trade program but time ran out in the legislature. Fast-forward to 2017 and the Democratic supermajority is poised to finish the job with the governors budget clearly indicating his desire to finish what he started. That's incredibly important for creating not only the precedent that carbon can and will be priced but for creating a permanent source of revenue to fund our inevitable transition.

Already carbon funds are flowing into some of California's poorest communities, making homes more weather proof, creating new construction jobs, and cutting energy bills to free up tight funds for things like groceries. One thing to watch will be whether or not this morphs into a straight carbon tax. Regardless of the form it takes, with Gov. Brown sending two of his top lieutenants to the California Public Utilities Commission (PUC) and the 2018 race looming large, he is set to cement his climate legacy.

Brown's legacy however is not just about getting California's house in order. This also sets the state up to launch strategic incursions at home and abroad to help spread and finance the cleantech revolution. California can and should find creative ways to finance cleantech exports to support the wide array of cleantech and clean car companies headquartered in California. For instance, California could expand the offerings of its infrastructure bank, funded by cap and trade or carbon tax revenue, in a way that enables its own version of a multilateral development bank focused on providing state aid to other states seeking to replicate the economic prosperity clean energy is driving in California. California could in fact show the MDB's how to do it right by devoting its capital to derisking (loan guarantees, etc), and letting the private sector do the actual funding thereby stretching and leveraging its scarce dollars to create billions in investment. Not only will this financially benefit the state it will create a new power base - the new energy super majors of the 21st century capable of doing battle with the dark forces currently trying to mire us in the 19th century.

But perhaps the most powerful export for California is climate policy including those that have reliably driven renewable deployment, electric-vehicles, and energy efficiency. These policies have driven tens of billions of dollars of private investment, technology innovation, and job creation and they are easily transferable and scalable to other states and countries. That includes a long tradition of collaborating with China as the country stands up its cap and trade program as well as a potential electric vehicle mandate to decarbonize. This needs to be a priority for the state and everyone who cares about climate.

All of these opportunities will generate ample political opportunity for aspiring young politicians. What better conditions for the next California Governor then to be the brave knight doing battle with the dark forces of DC for the next 2-6 years? This at a time when progressive Democratic leadership at the national level has a vacuum of its own it's seeking to fill. Indeed, for the next generation of California climate leaders not only could they create a new pole of power in US politics they could leverage this platform to once and for all take the climate revolution to DC.

None of this of course should engender passive hope or naieve optimism. What we need now is neither of those things. What we need now are leaders not only willing to talk the talk but willing to walk the walk. The conditions in California are ripe, the climate situation dire, and the clock is ticking. Now is the time to have an answer when your kids ask where were you when the darkness descended?