Charlie Sheen may have inadvertently caused a public awareness renaissance with his recent admission that he is HIV positive. Ironically, after America was riveted by watching Sheen's very public series of setbacks caused by addictive and socially destructive behavior, an opportunity to readdress a long lingering and unnecessary battle -- HIV -- emerged. Recent research published today in JAMA Internal Medicine affirms the "the Sheen Effect" caused a cascade of inquiries into testing and preventive measures among the public. This is not only a positive outcome, it's momentum which we MUST seize in order to make further progress in eradicating the virus that until now much of the public seemed to have lost interest in.

In 1987, two-thirds of the American population considered HIV and AIDS to be one of the most urgent health problems facing our country. Since then however, our collective attention to this disease has waned considerably and we rarely think about it or hear about it from the media. Even on our own show, now in its seventh season, we have never broached this topic, at least until recently - more on that in a moment. 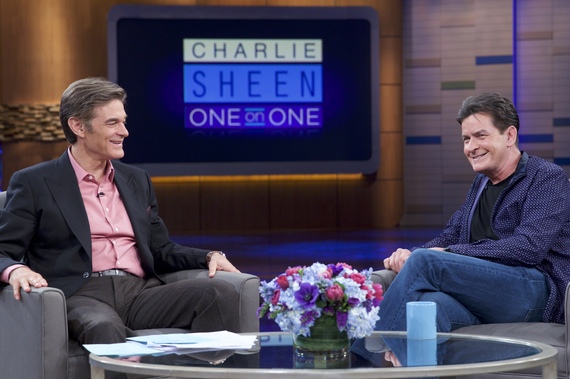 Fortunately, we have made substantial progress in the treatment of this once quickly-fatal disease. Highly Active Antiretroviral Therapy (known as HAART) allows people diagnosed with HIV, who take it regularly, to live an almost "normal" life, with life expectancy approaching those without the disease. People taking HAART can reduce the amount of HIV virus circulating within their body fluids so substantially that we can't even detect it with our current technology. This is aptly referred to as an "undetectable viral load". To date, studies have yet to show that someone with an undetectable viral load can pass on the disease to someone else. In addition, people who are not infected with HIV can take what's know as Pre-exposure Prophylaxis Medication (PreP), which, when taken daily, can help prevent them from contracting the virus if they are exposed.

Despite these great achievements, the HIV epidemic still persists. And unfortunately, our collective complacency to this fact perpetuates its spread. Today there are 1.2 million Americans living with HIV and 50,000 additional cases join them each year. Of those 1.2 million people, it's estimated that about 14 percent have not been tested and don't even know their status. This puts them and the rest of the population at risk. What's more, of the 86 percent of those with HIV infection that know their status, only 30 percent of them have suppressed the virus with antiretroviral drugs to undetectable levels. Imagine if all of these people knew their status and had undetectable viral loads--we could essentially stop transmission of this disease and eradicate it!

So why do so few people with HIV have undetectable viral loads? According to the CDC, the two biggest reasons are: 1) they are not receiving care or 2) they are undiagnosed. This emphasizes the need for easy access to regular testing and constantly waging information campaigns on prevention and treatment.

So how can we more effectively do this?

Like it or not, the power of celebrity can help us win the battle. Sheen's case represents a teachable moment and while he has the country's attention we must repurpose it for the greater good. On November 17th 2015, he shocked the world when he announced that he has been living with the HIV virus for the past four years. In his initial interview he said that he didn't want to be the "poster man" for HIV, but that he also was making his announcement for "social reasons" and wouldn't "shun" opportunities and a responsibility to help others. Since that announcement, he has certainly not "shunned" those opportunities, but has in fact appeared on our show four times to talk about what it means to have HIV today, how he is coping with the illness and using his abilities to "chase the cure." Like anyone, he has had some missteps along the way but is on a promising journey to help both himself and others.

Charlie's announcement will have an enormous impact on our fight to eradicate HIV. But you don't have to take our word for it. According to Professor John Ayers, from the San Diego State University School of Public Health, and lead author of the study published today in JAMA Internal Medicine, "Our analysis suggests, Charlie Sheen's HIV disclosure may already be the most significant HIV prevention event in our nation's history, even though it was unplanned and was not framed as a public health intervention." In the study, Ayers and colleagues compared historic media coverage and Internet searches related to HIV to those that occurred after Charlie's announcement. According to their findings, Sheen's announcement was among the top one percent of historic HIV related media events and led to 2.75 million more searches on HIV than expected as well as 1.25 million more prevention related searches than expected for terms such as "condoms," "HIV symptoms," and "testing." This increased interest in the issue can only have a positive effect on health.

In this era of social media and mobile devices, public health messages can spread faster and more widely than ever before. Charlie's announcement has once again spurred our collective interest in HIV and its prevention and this is a watershed moment -- long overdue. We hope that others will embrace this opportunity. Utilizing all of our available resources and allies in this battle against disease can only bring us closer to winning.

People are already interested in reading about and watching celebrities. Using their life experiences and health journeys as an expository case study not only is stealth public health education, it transcends the superficial nature of our Hollywood tabloid subculture and lets us all sleep a little better knowing we brought meaning and awareness to an otherwise urbane news cycle. Charlie Sheen did a good thing and has given us a platform. Let's use it.
_______________

Click to watch Charlie Sheen discuss his diagnosis on The Dr. Oz Show.