China's polluted air -- so much in the news these days -- has been 30 years in the making. 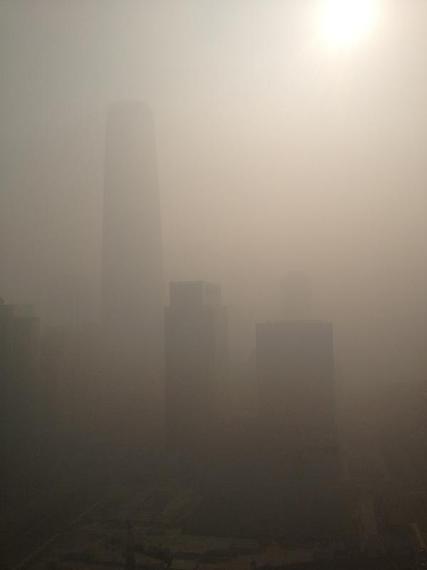 When Deng Xiaoping introduced market reforms in the late 1970s, the country started its steady rise from the economic doldrums, largely through investment in heavy industrialisation. Since then, its GDP has grown about 10 per cent annually, and its economy has displaced Japan's as the world's second largest.

Industrialisation, the foundation of China's economic upsurge, has relied on tremendous energy reserves -- and most of this energy, about 70 per cent, comes from coal. Today, China consumes slightly more coal than all other countries in the world combined. And each ton of coal that is burnt there produces more than one ton of pollutants, including carbon dioxide, particulate matter, sulfur dioxide and mercury.

The economic prosperity generated by China's industrialisation has given rise to a burgeoning middle class, which is consuming, heavily -- buying televisions, washers, refrigerators, air-conditioners, heaters, larger homes and cars (all significantly increasing the demand for energy resources). In 1978 there wasn't a single privately owned car in China; today, China is the world's largest car market, purchasing about 20 million units in 2013 alone. Emissions from these cars spew toxins of all variety into the air.

Coal and cars are the culprits largely responsible for the thick, soupy air that frequently envelops cities like Beijing, Harbin and Shanghai -- rendering their skylines invisible and turning day into night. Not surprisingly, this air is dangerous to breathe.

Scientific studies released just this past year show: 1) that pollutants in the outdoor air led to 1.2 million premature deaths in China in 2010; 2) that between 1981 and 2001 average life expectancy in north China was a full 5.5 years shorter than in south China, owing simply to the higher burden of particulate matter there (55 per cent higher) -- a result of the region's heavier dependence on coal for heating; and 3) that while China's rate of tobacco smoking has remained level over the past three decades the rate of lung cancer has increased 465 per cent, because fine particles (PM2.5) suspended in the country's air can make their way deep into lungs and lodge there.

These astonishing figures point to a simple fact: China's air is wreaking havoc on the health and wellbeing of the people there.

The economic costs of air pollution are considerable too. As mortality and morbidity rates rise, so obviously do medical costs and the number of missed working days, leading to lost productivity. In addition, polluted air results in resource depletion: soil acidification from acid rain reduces the amount of China's arable land and crop productivity; mercury emitted by coal combustion enters the water systems, contaminating water and affecting fish, rice, vegetables and fruits; and airborne pollutants kill off trees and forests.

Chinese citizens are making their displeasure known. In the past few years they have increasingly taken to the streets to express their opposition to the building of coal-fired power plants, waste incinerators, chemical plants, oil refineries, battery factories and the like that pollute the atmosphere, water and soil, and endanger people's lives and livelihoods. Indeed, just this month thousands took to the streets to protest a paraxylene plant in Maoming city in Guangdong.

The Communist Party now finds itself caught in an irony of its own making: the economic prosperity it has fostered for the people over the past 30 years is a powerful source of its ongoing legitimacy; but the polluted environment spawned by that prosperity is putting the people's support for the party -- the party's legitimacy -- at some risk. The challenge the leaders in Beijing face is finding the right balance between economic development and environmental protection. They must curb environmental pollution without putting a halt to the country's economic progress.

Taking this challenge on, the Chinese government has recently promoted a range of policies and measures intended to protect the environment and clean up the pollution. These include shutting down small and inefficient coal plants, banning the building of new coal-fired power plants in key economic zones, putting caps on coal consumption, introducing trial carbon-trading programs in four major regions, and placing a limit on the growth of emission-intensive industries. And recently it was announced that the legislature is considering the implementation of an environmental pollution tax.

To offset the reduced dependence on coal, the government is also looking to expand the energy reserves coming from other fuel sources, namely, natural gas, wind, solar, hydroelectric, and nuclear power (each of which presents its own set of challenges). And to cut vehicle emissions it plans to remove from the roads all cars registered prior to 2005, require the use of the much cleaner China V gasoline, promote the development and use of green vehicles, and expand the public transit systems.

But such plans and measures, in the end, are not likely to count for much unless Beijing confronts what has proved to be the biggest obstacle in its battle against pollution: ineffective implementation and enforcement of environmental laws and regulations.

Ineffective implementation results in part from contradictory messages Beijing sends the country's lower officials. The government in Beijing determines environmental policies and measures, and then places the responsibility for their implementation on local officials. But, these local officials, at the same time, are pressed by Beijing to pursue economic growth above all else; in assessing official performance, in deciding promotions and demotions, the Beijing government gives heaviest weight to success -- or failure -- in developing the local economy. As a consequence, local officials are naturally far more dedicated to "growing" the economy than to protecting the environment. Thus, if Beijing is genuinely committed to cleaning up the country's polluted air, water, and soil, it must refine its calculus for grading and rewarding the performance of local officials. Yes, the leadership routinely proclaims its intention to give greater weight to stewardship of the environment, but, in practice, environmental protection continues to count for relatively little.

A closely related problem is enforcement of environmental policy and law. The government can propose, legislate and talk of a 'war on pollution' all it wants, but if there is no central supervisory body or mechanism with real authority, power and resources to monitor and enforce compliance, and to press for the resolution of environmental problems that arise, the war will not easily be won.

Bold structural reform is needed. Today, responsibility for environmental monitoring is divided among at least six state ministries and agencies, with often competing agendas and goals. Environmental authority is simply too disparate, too weak. It is time for Beijing's leaders to give the Ministry of Environmental Protection (MEP) the sort of comprehensive supervisory power that would transform it into a forceful national environmental protection agency. As the youngest ministry of the 25 in the State Council (elevated from state agency status only in 2008), with a meagre staff of 300 (the US EPA has more than 17,000), the MEP presently has little real capacity to take command of the nation's environmental challenges. Nor, it might be added, can it do much to enforce local compliance with environmental regulations.

If the Chinese government is genuinely committed to winning the war on pollution, it is time to endow the state ministry responsible for environmental protection with the level of staffing, funding and authority that reflects that commitment.