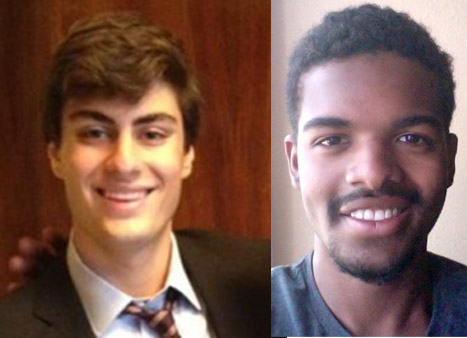 Two Write for the Future College Admissions Essays inadvertently address the question as the writers explore the impacts of their parents' partings.

Destruction and Growth
by Cameron Carr

My family was destroyed on a beautiful day: August 19, 2006. My dad packed my things from camp into the car and it was time to leave Orson, Pennsylvania. I said goodbye to the girl who I was crushing on the whole time I was there, and she gave me a kiss goodbye. Nice. After that I hopped into the car with a big smile on my face as we made our way back to New York City.

The smile was fading, but still on my face when we stopped at Wendy's. My dad was oddly quiet while I ate my chicken tenders, carefully dipping them in barbecue sauce with the precision of a bomb surgeon. However, I did not know that a bomb was literally about to explode. "Cam," my father said nervously as he steered back to reality, "Your mother and I are getting a divorce." How does a 13-year old react to that? The barbeque sauce in my mouth instantly lost its sweet flavor and began to sting. All I could do was stare blankly into the open canvas of road rolling by the window. I uttered my first response in a shaky, confused voice. "Wh-y?" My dad responded, but I heard nothing but a monotone depressed voice smothered by my mind's traffic jam.

It was a three-hour ride before I saw my mother anxiously awaiting my return at the door. I stepped into my house, and suddenly it didn't feel like home. It was a tall brownstone that stood out from the rest on the block, but it lost its glow and swallowed us as we entered. Like myself, my house was in pain, exhausted from trying to pull our hanging family back from the edge of the cliff. The house's oak glazed floors had been beaten down, and easily creeked, screeching whenever you pressed your foot down on its body. It was no longer my beloved brownstone, but was a war zone as my both parents ambushed me with their sides of the story. My parents' voices simply went into one ear and then quickly out the other. I transformed into a different person that day. Not only did I begin to look at marriages differently, but I started to see adults as humans--no longer heroes.

Ironically as I began to look at adults more realistically, my relationships with them grew much stronger, as they became less intimidating. I saw this a year ago when I started a job as a sales representative for Cutco, Cutlery Company. My target customers are middle age adults. As a salesperson, I easily understood the secret of intriguing the potential buyers--establish a relationship. My first sale was to a woman with 30 years on me. Her age did not stagger my conversational skills. She lived in an elegant brownstone. I told her I used to live in one.

Eventually this branched into my school and whether it was the right place for her child. I fueled the discussion by improvising, wherever the conversation flowed. Engaging in deep discussions with adults feels natural. This helped me win the top salesman award in my first week with $2,974 dollars in sales. I love my job because it tests my speaking skills and self-confidence. Many adults like to present their authority and status, yet they appreciate the character of a teenager who knows how to challenge them with a confident, but not obnoxious, attitude. I demonstrate this persona with piercing eye contact and a firm handshake.

The divorce taught me to take action during stressful situations, which once saved two kids from excessive bruises. It happened at a community home for 30 children who have suffered abuse. I was selected as one of 20 students to serve as mentors for children, ages 8-12, at the Ittleson Community Home. Under the supervision of adults who work at the home, we lead sports activities, arts and crafts and other fun events for the kids. One afternoon, two boys started fighting. The Ittleson adult supervisors watched them, commenting on the fight as if it were a boxing match, while I instinctively ran in between the kids and broke up the brawl without any help from the adults. I also convinced the boys to apologize to each other.

It was easier to go between two kids than to split time between my parents who still battle for full custody. Despite my growth, I can't ignore the weight of the stress from the divorce. It imprisoned parts of my personality. I did go to my Dean at school for advice and he told me "the people who struggle now are conditioned for life in the future yet to come." His words became the source of my determination to let nothing stand in my way to success, and compelled me to see the benefits of the change in my character after the divorce.

When I now confront pressure and stress, I strongly adapt in order to stay sane and deeply involved in school, sports, art and community. I have developed a toughness that has allowed me to resist emotional breakdowns when problems occur. The maturity I acquired from this divorce was well worth the rough journey I experienced in high school, and will act as a crucial necessity for life and careers yet to come. This is a form of adaptive evolution, as my personality was shaped into a more mature character. Over time, my comedic side was able to reappear just as it was on the day I received that kiss at camp.

Cameron Carr is a Sophomore at Pitzer College and a 2011 graduate of the Ethical Culture Fieldston School.

Imagine Hillary Clinton and Michelle Bachman on the same presidential ticket. Most people probably can't. Yet my composition as a person sees that kind of team as good for the sake of the world. I have a strong urge to bridge differences and bring opposites together. For example, I ran for senior class president with my friend Eric, a true opposite. If I'm Obama, he's Rick Perry. We won.

I trace my interests and skills in uniting people with differences to my parent's divorce when I was six years old. Their separation inevitably opened my life to three father figures. One is an intellectual. Another is a rugby-playing South African. Then, there is my stepfather who is one of the kindest men I have ever met. The process of bonding with these very different men compelled the versatility of my personality and my ability to bridge differences.

Not too long after meeting Steve, my mom's ex-fiancé, I was out in Central Park playing my first game of rugby. I remember Steve's explanation of the scrum. "Each team lines up, much like in football, but then fights for a loose ball." I immediately showed my friends at school. Before I knew it, we were playing rugby during recess at Dalton. I can still remember Steve tossing me a rugby ball, showing me that if he is selfish and doesn't pass, the team never gets an opportunity to keep the ball moving. After five years, Steve and my mom broke up in the middle of eighth grade. Yet, his influence lives on. Just last year, I was in my most challenging wrestling meet of the season against Rye Country Day. We were down by a pin with two more matches to go, mine being one of them. Coach came up to me and said, "Heftler, we need a pin here. If you pin, we win." The match started and I'm taken down after my sloppy and overly confident attempt at a head chancery, which is a challenging move that almost guarantees a pin. The next thing I know, Steve's words on the makeshift rugby field came back to me. I am not wrestling for my own personal record but for all my teammates. I quickly scrambled out of my opponents hold and put him on his back, pinning him and winning the match.

The wrestling match fell in the middle of a grueling week of tests and papers. My friends planned an escape from it all on Friday night: a trip to the movies to see 127 Hours. I didn't go. My parent's divorce prescribes limited time with my father, so I chose dinner with pops. He's the intellectual who I can't imagine on a rugby field, but I always leave our dinners with a larger sense of the world.

Over my pop's home-cooked veal cutlets, our conversation wandered over to the justification of the atomic bomb on Hiroshima and Nagasaki, something discussed in my World History class. He shared his own insight as his father, my grandfather, once shared with him. Grandpa Heshy fought for the US in the Pacific at the time. Why was it OK to use the bomb in Japan and not in Europe? I combed through readings over the subject that weekend. On Monday in history, I sensed the awe of my teacher and classmates over my comments in the class debate over the bomb.

Finally there's Keith, who came into my life when I was a freshman in high school. At first, it was hard for me to accept him. I simply felt I didn't need a new father figure in my life. However, his persistent kindness cracked through my shell. Last year, Keith won tickets to the Super Bowl in Dallas and it had always been his dream to go to the big game. Yet he gave up his seat so I could invite Jack, one of my best friends, to the game. Afterwards Keith insisted on driving us an hour away from our hotel at 2 AM into Dallas to try a famous mesquite smoked steak that I talked about before the trip. Our close relationship now demonstrates how kindness bridges divides.

You wouldn't use the word kind to describe my friend and classmate, Eric. At times he's crude, demanding, harsh and extremely organized. I am known as friendly, outgoing, and rarely insulting. We're so different yet Eric and I became a team with a campaign that won the election as co-presidents of the senior class at Dalton. Getting along with Eric, let alone campaigning with him, would be difficult for some people. Yet for me, teaming with Eric was like tossing another rugby ball.

Julius Charles Heftler is a freshman at Lehigh University and a 2012 graduate of The Dalton School.