With these words, Microsoft founder Bill Gates helps frame an important moment for the humanitarian response community. Emerging technologies with a tremendous potential to dramatically decrease loss of life in a disaster scenario are on the visible but still far horizon. They show promise but not ready for pragmatic wide-scale use. How do we heed the advice of Mr. Gates and act today to enable the major leaps of the next decade that will save hundreds of thousands of lives?

Reflecting on the 2014 Ebola outbreak response can start the conversation. Mobile phones and cellular networks were readily accessible to Ebola responders. Their potential as a powerful, emerged technical tool to track and trace the outbreak and response were well documented and understood. However, phones in the hands of first responders and affected population did not ensure critical information got to organizers fast enough to get ahead of the outbreak in countries like Liberia and Sierra Leone.

A number of factors contributed to the technology inefficiency in ebola response. Various response groups were using different information systems which meant they could not collaborate or share information easily. No legal partnership agreements on emergency protocol for telecommunication companies were in place, which meant caller data which could be used to track the outbreak was not released. A lack of basic reporting infrastructure at health clinics resulted in underreported or incomplete information of the situation. The 2014 Ebola episode demonstrated the impact of advanced technology in emergency response is only as good as the foundational systemic pieces focused on prevention, preparedness and local capacities.

The Red Cross and Red Crescent have been leading a worldwide discussion on how we leverage emerging tech to strengthen community resilience in their Global Dialogue on Emerging Technology for Emerging Needs. Michele Lynch is a lead on the initiative for the Red Cross which has engaged local, national and global stakeholders. "Futurists and consumers agree that emerging tools like 3-D printers, augmented reality software, biometric scanners, robots, unmanned aerial vehicles and wearable devices are sparking another technology revolution" Lynch states. "Preparing for their arrival in the marketplace will help to mitigate potential disruption and increase acceptance, demand, and usage, in everyday life and in disaster preparedness, response and rebuilding".

One can quickly envision the potential for drones in humanitarian response. Drones have a mobility that humans do not, their ability to do things autonomously and from a distance opens the door for vaccines, medicine and other supplies to reach the most remote communities, even if roads are closed, damaged or nonexistent. Drones can also be programed to do repeated tasks autonomously, allowing them to easily take on some larger tasks. It is like if you teach a machine to process one medical record they can process a million, drones likewise can do repetitive remote physical actions quickly and at a large frequency. The experimentation has already begun with drones, opening up important appropriate design and ethical considerations.

Somewhere between military grade drones and the do-it-yourself (DIY) variety is a design that can take on the specialized tasks in humanitarian response situations. The ten year outlook for drones is delivery and transport of critical materials and equipment, but interim goals are needed to advance the specialized design requirements. Producing updated and real-time satellite imagery of a location in the immediate aftermath of a disaster is an example of the short term goals for drones, one that forward-thinking groups like Planet Labs are already chasing.

Another tangible short term goal is for drones to reconnect affected populations and responders when the disaster may have shut down communication and information networks "By transmitting cellular and Wi-Fi signals using a mesh network, UAVs have the potential to restore critical communications for citizens following a disaster" explains Lynch.

Unlocking the potential of drones will also require ethics considerations and advanced policy around privacy and dignity of affected populations and updates to aviation regulations. At the same time, the ethical questions which drones open up are not necessarily new, they are similar to questions which have been debated in the humanitarian community for years. With the appropriate technical and policy advancements, completed in a participatory manner over the next few years, drones are positioned to improve humanitarian response exponentially. 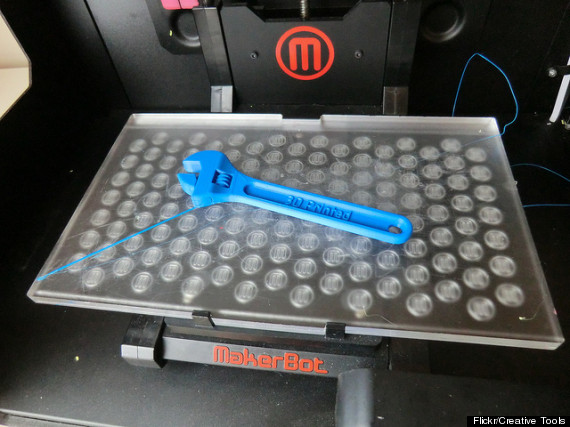 Onsite 3-D printing of objects ignites the imagination for strengthening supply chain and sustainability of equipment and materials in humanitarian response. While not as applicable to the immediate aftermath of a disaster, 3-D printing could have a huge role to play in the recovery and resilience building, by opening the door for repair and extending the life of equipment and materials. "3-D printing also enables people to adapt relief items, particularly for the disabled" Lynch shares. "Examples may include a splint for injuries, modified tools for amputees or portable ramps for wheelchairs. Many designs are already open source and available online."

To make the long term leap, short term pricing, material and production gaps must be taken on in the short term. Industrial 3-D printers are expensive, and require specific raw materials. Creating the supply chain of raw materials to the humanitarian community is an immediate challenge, a problem groups like Ethical Filament are taking on by turning recycled materials in those raw materials. Getting 3-D printers into the hands of innovators at the community level is also critical to enabling a bottom-up wave of little inventions that will pop up and cause a chain reaction, the sparks of innovation. Getting 3-D printers (as well as drones) into the hands of grassroots groups like MakerNurse will foster experimentation that generates the small breakthroughs that lead to the significant gains.

Meeting the expectation of the technology revolution in humanitarian response will be a continuous systems strengthening exercise. Community groups best placed to design solutions should be engaged with drones and 3-D printers, as well other emerging technology such as wearables, connected diagnostics, smart home technology. Committed systems thinkers among these groups can work day-by-day to experiment and build the resilience and preparedness of their local communities and institutions.