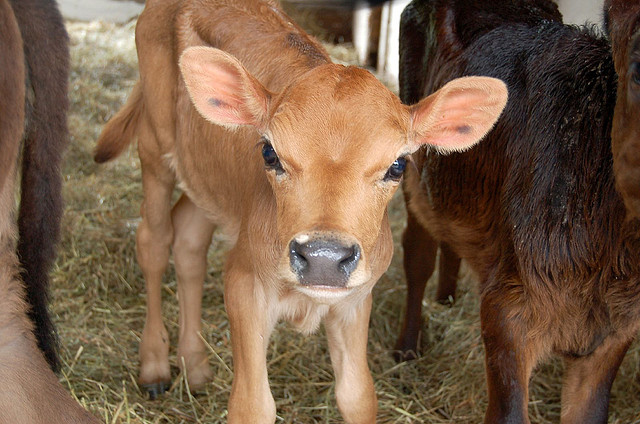 I haven't eaten much veal throughout my life because of the inhumane conditions in which the baby calves are raised. The few times I tried a bite of someone's veal dish (against my better judgment), I thought what's the big deal? The meat is bland, lacks any color, and is simply tasteless. And who cares that you can cut it with a fork?

If you've ever watched Gordon Ramsay's F Word on BBC America, you might have seen his friend Janet Street raise veal calves for his F Word restaurant. These are not the traditional American veal calves that makes many think of animal cruelty. You know, the "white veal" that's anemic in color, raised on a formula diet that's deficient in iron and fiber, and is complete with all the chemicals, antibiotics, hormones and is confined in pins so small, they can't move (these type of living conditions were banned in Britain in 1990).

Janet's cows don't even come close to resembling America's sick veal calves. Her calves are grass-fed. That means they are pastured, allowed to forage for their own grass, get exercise and play and live close to a normal baby calves' life. And they don't produce tasteless, anemic, white meat. They produce a rosy, pink meat.

Many chefs, who for years had refused to serve veal on their menus because of its lack of flavor and inhumane treatment, have now turned to this "natural" veal. This grass-fed, rosy pink veal has a mild beef flavor. It's sold under names that reflect this change like: meadow, red, rose, pastured, grass-fed, free-range, and suckled. Be forewarned: currently there is no standard for "natural" or humanely raised veal, so you must do your due diligence and verify with your source how their veal is raised.

Many customers and chefs are more apt to eating meats that are humanely raised and fed a more natural diet. Top chefs like Wolfgang Puck of Spago in Beverly Hills and Charlie Palmer of Charlie Palmer Steak in Washington, DC have turned to serving humanely raised veal and meats on their menus. Sick, factory farmed animals that are fed a steady supply of junk food, hormones, antibiotics, and chemicals, just aren't appetizing to the smart chef or customer.

Some in the meat industry, however, feel that grass-fed veal really isn't veal at all. The classic definition of veal is "milk fed." So if your veal isn't milk-fed (or formula-fed with who knows what, think: a steady supply of antibiotics and hormones), and is grass-fed, is it really veal? The question then becomes: what is more important, the traditional definition of veal (a calf that is fed nutritionally deficient formula or milk that's raised in confined spaces), or a humanely raised healthy animal that is grass fed? Or do we even eat veal at all?

When I asked Rod Morrison, CEO of Wyoming's Rocky Mountain Organic Meats what his opinion on "natural" and "humanely" raised veal is, he shared this:

"Grass-fed veal is a marketing idea. These are more than likely milk cow calves that have been removed from their milk cow mothers so we humans can have the milk. Therefore they are placed in pastures, which is nice and more humane, but the calf still prefers milk, but in this case it is being fed a milk substitute that is certainly full of antibiotics, because the mother's milk is no longer available with its organic occurring antibodies. Is it better? That's for the person that eats veal to decide. Personally, veal is just not anywhere on my list of eatable meats."

The question remains, is eating "natural" or "humanely raised" veal guilt-free? You be the judge.