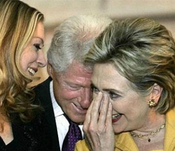 Tip your hat to Robert Morrow, the newly elected chair of the Republican Party in Travis County, Texas. If it's true that 1.5 million Americans are being prescribed the wrong medication, he's the poster boy. And a couple years ago, he clearly replaced his daily psychoanalysis session with a Twitter account. Many people have done the same thing, but few have the cajones to tell their constituency about their dick and boob obsessions in 40 tweets a day.

Some of his recent tweets have been deleted, perhaps by him, or a friend (he does thank someone in one tweet for helping him learn about behavior on Twitter), but the friend didn't stop him from posting tweets like:

Bill says Hillary has "eaten more pussy than he has."

Pretty sure George W. Bush can suck a dick better than Hillary Clinton

Rubio needs to be in gay underwear advertisements.

If Hillary Clinton is elected the next president of the USA, I will put my tongue up Barbara Bush's ass on national TV.

Don't lose sight of the fact that these are posted by the Travis County GOP Chair. As an elected official, his claims are subject to fact verification. Alas, the only one we can test is the last on that list. And it is not true in terms of the Google search he boasts - which only brings up 500,000 hits. Most of those say he's crazy (in general); others are on topics related to nothing whatsoever with the search term.

One of the chairman's tweets that has nothing to do with sex organs -- but actually resonates -- is: "I am the face of the GOP." Well, yes, Rob, yes you are. It's very clear that, in almost all 28,600 tweets you've posted over two years, most of them are about Democratic conspiracies and sex organs. Do the math: that's almost 40 times per day that you're thinking aloud about gay underwear ads (whatever those are), blowjobs, lesbian fantasies, Barbara Bush's ass and contemplating that the "war on women" is from the Clinton camp. You're a one-man vaginal probe, as far as we can tell.

By the way, Rob: bring that tape measure back to the store you bought it from. The one they sold you is metric.