Across the board, bullying seems to be the new trend. Saturating the news are stories of people tearing each other down. Even Missouri's auditor and top governor candidate Tom Schweich, who recently committed suicide, demonstrated that being a victim of harassment could be overwhelming.

Also, a Kansas City Home Owner Association refused to let a 10-year-old girl struggling with Leukemia get her Make-a-Wish request granted because the playhouse didn't fit their guidelines. Unfortunately, it took more bullying from the public to humiliate this gang of HOA control freaks, causing them to reverse their first decision.

People, why can't we all just get along?!

Once again, I must jump up on my granola box and shout through my poorly manicured hands, "Everybody stop being jerks!" Don't you care that your kids are watching and learning from you?

The American Academy of Pediatrics defines bullying as, "A form of violence defined as repetitive, intentional aggression that involves a disparity of power between the victim and perpetrator."

Perhaps the origin of this vicious circle-of-abuse is that the bullies' parents are clueless they are partially responsible. Is it because the parent learned it from their parents and the generation before? Even if educators or other parents warn them of their child's bullying behavior, astoundingly many parents won't believe them.

"This is the fifth call from Y-Club and her teachers that Becky is displaying mean tendencies toward a group of girls. Can you believe that? She is always so funny at home and cracking jokes about her friends."

Wake up and smell the high school detention room because according to a National Association of School Psychologists report, "...out of 15,000 6th-10th graders, approximately 3.7 million youths engage in, and more than 3.2 million are victims of, moderate or serious bullying each year." That's a whole lot of tormenting going on and it looks like there could be a GED with your kid's name on it!

Are you sure your kid isn't responsible for this behavior? I repeatedly question my kids to see if they are treating others poorly. Are they having problems with anyone in school? Pro-active teachings and reinforcements are needed to prevent this type of physical or mental abuse.

Bullying obviously gets my feathers ruffled, but this week when I was stressed because of mean girl behavior at the elementary school, I had the rug pulled out from under me. A Theatre and Film professor at the University of Kansas, Ron Willis, passed away. He had such an outpouring of love and support shown by all the students he impacted over his long career, and from all parts of the world. This wonderful man was doing something right.

When I described my love and respect for him to his family, I reflected on how he made such a profound impact in my life. Not only was he one of my beloved directors in musical theater, he truly believed in me and became a second father figure to me.

Every time Ron would spot me from across the green room, his face would light up like Tinker Bells' heinie, and we would worm our way through the crowd for the embrace, the same one that erased my worries or pain. 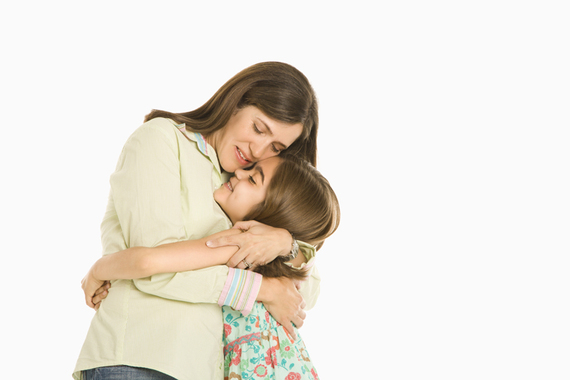 His hugs were powerful and loving. And he never let go until I did first. This was such a paternal and selfless act of kindness.

So I started thinking if all parents were to hug our children every day -- and I'm not talking about the side hug with a lousy uncomfortable light tap-tap-tap on the back -- but a REAL hug where you shut your eyes, breathe in your child's hair and never let go until they are ready to release, we could possibly devoid the world of bullies. This would give children, whether they are the bully or the bullied, a sense of self-worth and respect. It isn't until then that they can understand what love is, feel like they matter in the world, and what safety feels like.

My challenge is to start the parent hugging campaign. This is where you don't let go of a hug, until your child is ready to be released. Let's see if this simple act of love can change the psyche of our kids.

Thanks, Ron for loving me and taking care of me when I was away at college. The memories of your hug will stay with me.

Your legacy lives on forever in my heart, and hopefully will be passed onto my girls and the generations to follow.


More:
Parentsbullies
Newsletter Sign Up
Raise the kind of person you'd like to know
Subscribe to our parenting newsletter.
Successfully Subscribed!
Realness delivered to your inbox