I was in the 10th arrondissement in Paris, somewhere by Rue des Petites Écuries on a Saturday night. As much as us Americans like to think that Paris is a city of class and sophistication, Friday's and Saturday's have the universal power of bringing out the best in sloppy uninhibited drunks no matter where you are. On this particular night, I had my 'fro out for the first time in Paris. I had met up with my friend Maxence. He barely noticed that I had changed my hair from long and straight to round and kinky, but when he did I told him how people in America (particularly non-blacks) can't get enough of afros. I told him how, when I had my 'fro, it would always bring on so much (usually unwanted) attention, attention that would often result in the utterance of a simple five-word question that I've now gotten pretty numb to: "Can I touch your hair?"

When I told Maxence this he didn't believe me. "Putain, it doesn't make any sense..." he said in his strong French accent, which he thinks sounds British. "It's like asking someone if you can touch their boobs." Ain't that the truth. But on that Saturday night, I had a great I-told-you-so moment when a young, blonde, inebriated mademoiselle stopped us somewhere in the 10th district and rattled off something very quickly and passionately in French. Maxence translated: "She wants to touch your hair." (That's the short version of the exchange). My response to such a solicitation usually depends on my mood. On this night I was tickled by being asked the question in French, so I obliged. She stroked me. She actually really got in there, so I had to curtly make her stop. I wonder if she got any satisfaction from it and if so, what kind? Did my hair feel good on her hands? Was some sort of curiosity finally satisfied? Or was I simply just a Saturday night amusement?

This sort of an encounter is not unique to me. Several people experience the same thing. One of the readers of my site, un-ruly.com, explained how embarrassed she felt when two strangers tugged on her hair on an escalator in Herald Square. Another reader described how a simple trip to Starbucks turned into her being subjected to whispers of "Do you think she braids it everyday? What about washing it? It must take a long time? I wonder does it hurt her fingers?" A friend of mine had her hair fondled by a complete stranger who had creepily leered at her at Hale and Hearty before mustering up the courage to go for the gold.

The more I heard and read about stories like this, the more I wanted to understand what was behind it. Blogger Los Angelista attributed the phenomenon to "racial superiority and privilege." A 2011 CNN article quotes blogger Renee Martin who reasons, "it's about ownership of black bodies more than it has to actually do with hair." I found all that a bit extreme and likely written out of the anger and shock of their encounters. So I decided to talk to some of my white friends about the matter. Unfortunately, only one, who I'll call Mary Festonhouse, was willing to share her take.

Festonhouse, who's asked several people if she can touch their hair, reasoned that curiosity is behind the solicitation:

The same curiosity you probably have at getting to pet a snake for the first time and assuming it's slimy when in fact it's quite smooth and lustrous. Or that uncontrollable urge to touch a fur coat at Macy's. "Is it real rabbit?" and then you run the tips of your fingers through it and are surprised: "Oh, that's not what I thought it would feel like at all." So I'm not judging the snake or the coat, I'm just touching it for curiosity sake. I'm curious. Curious to know what your hair feels like since I only know what mine does. Curious to know why hair is so taboo, when I myself have never been raised to believe it was.

I found her comments interesting. Are we so different that touching us is as intriguing as touching a snake? Is our hair taboo?

A possible explanation for the intrigue is black hair (like black people) is rare. According to a 2010 report by the United States Census Bureau, blacks account for 12.6 percent of the U.S. population, which might explain why we're "foreign" to some people.

I grew up in WV [West Virginia]. There were no black people there. We had two black people in my entire school who were much older than I was. I didn't run in their circle, so the opportunity to give them a noogie on the noggin never presented itself. Once I moved to Richmond VA in the 10th grade, my group of friends were the punks, skaters and artists. Richmond was insanely segregated. The lunch tables were a good snapshot of it. Tables of only black kids and tables of only white kids.

Festonhouse's depiction of her school cafeteria is an interesting one. A 2012 Huffington Post article explained that American schools are still heavily segregated as a result of socio-economic imbalances. Perhaps the socio-economic wedge present in our formative years, coupled with the natural tendency for birds of a feather to flock together is creating a larger less visible rift among the various cultures of America, preventing us from getting to know each other, which, among other things, is leading to an utter disregard of a stranger's personal space.

Two years ago an unnamed black woman hosted an Ask Me Anything topic on social news site, Reddit: I am a black woman; ask me anything about my hair. Her discussion garnered 478 comments. It was a highly positive and productive discussion, with barely any trolling, and should be required reading for blacks and whites alike. One part of the discussion that stuck out was this response to a comment about never touching a black woman's hair: "Never. EVER. EVER, EVER, EVER. E.V.E.R. Touch anyone's hair without EXPRESSED consent from them first... Seriously." Similarly, many white women on the forum, Long Hair Community, say they dislike their hair being touched, especially by strangers. It's creepy. So it seems the consensus is a black woman's hair isn't taboo, a stranger's hair is taboo. Common courtesy says don't touch.

Even if we can all agree that it's unacceptable to touch any stranger in any sort of way, we're still left with an un-satiated curiosity about black hair and the sheer amount of questions on that Ask Me Anything discussion shows just how deep the curiosity goes.

To be honest I have a lot of questions about my hair, especially now that it's natural and the plethora of natural hair tutorials on YouTube shows that a lot of black women have questions about their natural hair too. Black hair is unique. It requires different care techniques and routines. And in a country where we primarily see commercials for white hair products and magazines that mainly cover white beauty topics and TV shows that mainly feature white characters, we, and those curious about us, have to find information about our hair from other sources.

It's easy to cite the media as the cause for underexposure to the various cultures of America. The media definitely plays a huge role. But another factor is the lack of the right kind of curiosity across the American population.

America the Melting Pot was renamed America the Salad Bowl -- a mix of cultures that didn't blend into one homogenous one, but instead maintained their own identities. There is such thing as a Black American culture, a White American culture, an Asian American culture, Native American, Hispanic American, and there are nuances and differences within those cultures. Living in America and not knowing anything about the other people that live in the country is impolite. It's like living with roommates for 236 years and knowing nothing about them; awwkwaaaaard. It's good to know your roommates; it makes for a more comfortable living situation. Americans are already notorious for not knowing much about the world outside of the U.S. We should certainly make an effort to know about the worlds inside America. 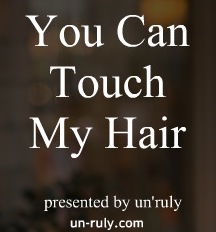 Public Art Exhibit: You Can Touch My Hair
In an effort to "take one for the team" and further explore the tactile fascination with black hair, un'ruly will be holding an interactive public art exhibit in New York City, on June 6th and June 8th 2013, dubbed, You Can Touch My Hair, where strangers from all walks of life will have the welcomed opportunity to touch various textures of black hair. The event will take place in Union Square between 2pm - 4pm. Get a reminder about the event by RSVP-ing on Facebook or learn more here.