The new Government of India has made financial inclusion one of the corner stones in its modernization aspirations for the country. In his first budget speech earlier this month, Finance Minister Arun Jaitley set the target of a financial account for each woman and each man in every Indian household by August 2015. This ambitious target is a recognition of how important access to basic financial transaction services -- and ultimately to better savings, credit and insurance options -- are for full economic citizenship in a country where more than 80 percent of people live and work in the informal economy.

The Finance Minister also put his weight behind the recent financial sector reform design of the Reserve Bank of India (RBI). Connecting every Indian family with the formal financial system within a year is a steep aspiration. And while it might take it little longer, a recent visit to India convinced me that over the past few months, the pieces have come together for India to make huge progress. 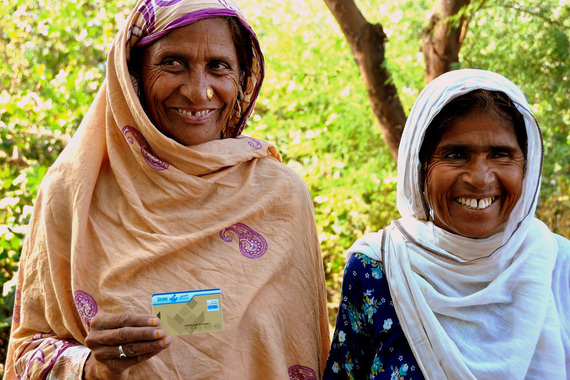 Using the key levers the government has at its disposal in the context of supporting a sustained market development effort, here are the elements that promise a real breakthrough:

In June, RBI started to take action on the recommendations from its recent Financial Inclusion Committee report. It already dropped several of the last restrictions on the banking correspondent (BC) model. Non-bank finance companies (NBFCs), previously excluded, can now become correspondents and, most importantly, the requirement for any BC outlet to be within a 30-kilometer radius of a bank branch has been removed. That radius requirement heavily favored the incumbent state-owned banks, which have the relatively largest branch network. Now, a poor-focused start-up bank with a single branch in, say, South Mumbai can create BC presence in rural areas throughout India by partnering with a fast-moving consumer goods company, or other players with a deep presence in rural India.

Last week, RBI also issued draft regulations for the new concept of a payment bank. Such a license will allows a mobile telephone company to operate mobile money subsidiaries and prepaid card instrument issuers to overcome the cash-out restrictions that have prevented the rapid uptake of the mobile money services that have proven so successful in East Africa. Payments banks would be allowed to facilitate payment transactions and take deposits, but not extend credit. As a mirror image, the reform plans also envisage the concept of credit-only banks for rural areas. India's deep and sophisticated domestic capital market is expected to intermediate the deposit-taking and the credit-extension of these specialized players.

As witnessed throughout the developing world, mobile telephone penetration continues to deepen in India and reached 886 million by the end of 2013. The unique biometric ID ("Aadhaar") has enrolled 646 million people, and RBI has allowed for the unique ID to be used as corner-stone in a digital compliance regime to meet the regulatory "Know-Your-Customer" requirements. This dramatically lowers the cost of opening a financial account for both consumers and providers alike.

Last month, I visited with participants in a current RBI pilot that utilizes Aadhaar to open virtual wallets in real-time for the recipients of domestic money transfers. In this scenario, every Aadhaar number essentially becomes an instant financial account and allows people to receive cash from a money transfer even if they have no account at any financial institution. If the new payment bank regulation enables similar approaches, India's financial inclusion aspiration could become true almost overnight.

India has some $60 billion worth of social programs and retail subsidies. The new government seems determined to reform these programs, switching to targeted benefit payments from generalized subsidies (e.g., for cooking gas) where that is not yet the case, and shifting all payment flows from cash to digital channels.

In addition to G2P payments, India has an estimated $60 billion in international remittances (e.g., from the Gulf to Kerala) and conceivably the same amount of domestic remittances along the corridors from the big urban centers back to the villages in the populous states of northern India, which also have some of the poorest people of the country. Together, these flows should contribute significantly towards the economic viability of the new or expanded banking channels the RBI's reform efforts are creating.

Between far-sighted enabling regulation, investments in 21st century infrastructure, and the willingness to channel its own transactions to lubricate the system, India is pulling all the right levers to advance financial inclusion and economic citizenship. It will be one of the most exciting places to watch, and to learn from, over the next few years in this regard.