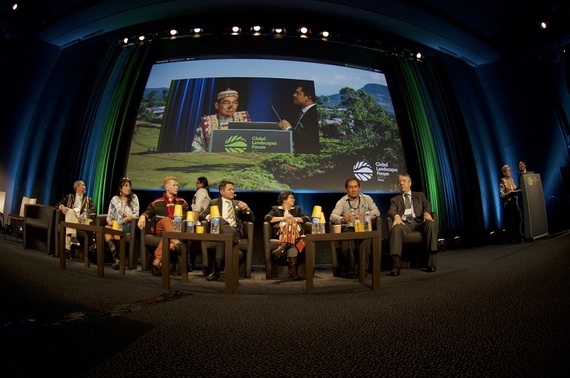 When it comes to development and indigenous peoples, the story we so often hear is one of exploitation and conflict. At the Global Landscapes Forum - which ran in parallel with the climate summit in Paris in December - there were glimmers of a very different story emerging.

At a discussion forum on Indigenous Peoples' rights and land tenure, a united refrain could be heard coming from opposite ends of the spectrum. There were indigenous and corporate voices calling for greater engagement of indigenous peoples in moving towards a more sustainable development future in the Amazon.

"We want to take part concretely in the development of our lands," said Maximiliano Correa Menezes, General Coordinator for COIAB, the Amazon's principle indigenous association. From the private sector, there was Antonio Fonescal dos Santos, Director of Environment and Sustainability of Brookfield Renewable Energy Group. He explained why his company has been working with COIAB on Brazil's Business and Indigenous People's Dialogue Initiative, which focuses on improving the relationship between companies and indigenous peoples in the Amazon, building more inclusive models of engagement and planning.

More than 20% of global forest carbon and much of the world's biodiversity is found in indigenous territories. We are not going to achieve the climate goals made in Paris unless indigenous and local communities are meaningful partners in creating the solution. Flying into São Félix do Xingu in Brazil's Pará State makes this very clear. The expansive green canopy of forest ends abruptly in a landscape of flat pasture. Underneath the canopied area was one of Brazil's Indigenous Lands- of which there are almost 700.

Brazil's indigenous peoples have been successfully stewarding the Amazonian forests for thousands of years, but seeing ranches and mining operations butting up against indigenous land, it's clear that this system faces yet more challenges. At least $40 billion is slated for 40 major infrastructure projects in the Amazon, much of which will affect indigenous lands.

Given the extreme development pressures and the imbalance between industry and indigenous access to resources; and given the deeply vested interests on both sides, were indigenous and business leaders really going to find common ground on how to develop the Amazon?

Helcio Souza, the Coordinator of The Nature Conservancy's Conservation in Indigenous Lands Strategy in Brazil, was well attuned to this impending collision of interests when he began the Dialogue Initiative in 2012. The conflicts were well-known and worsening. "You only heard about all the threats to indigenous lands; no one was trying to do something to improve the situation," Helcio explains.

In November, the public draft of Brazilian Guidelines for Good Corporate Practice with Indigenous Peoples was launched. This voluntary standard defines the 'rules of the road,' offering guidelines to companies for conducting business in a way that respects and engages appropriately with indigenous lands and peoples. "The discussion has led to an important shift in the mindset of all participating sectors. The relationship between companies and indigenous peoples came to be seen as an opportunity for both groups as opposed to one of permanent risk," says Helcio.

The three-plus year process to develop the guidelines has engaged thousands of people and has found common ground. It has injected a sliver of optimism into what formerly seemed to be a doomed adversarial relationship, but there are many challenges ahead.

However, three years ago, it would have been difficult to envisage these two very different men on stage with a shared vision and resolve - laying out a pathway for the greater inclusion of indigenous peoples in infrastructure development in the Amazon. Achieving sustainable development will hinge on addressing indigenous people's rights and bringing their voices more strongly into the process. And Maximiliano's and Antonio's comments suggest that this is at least possible. "You must have a dialogue with us," explained Maximiliano, "You must take into account our rights."

Ambitious commitments were made in Paris. It's now time to roll up our sleeves and start implementing solutions. There is no way we will be able to achieve the climate stabilization goals that were made in Paris without meaningfully engaging indigenous peoples and local communities in developing the solution.

Mark R. Tercek is the president and CEO of the Nature Conservancy and author of Nature's Fortune. Follow Mark on Twitter @MarkTercek.

Erin Myers Madeira is the Global Lands' Indigenous and Communities Program Lead for the Nature Conservancy.