In a May 15th report on a recent contemporary art auction held at Phillips, New York, Carol Vogel of the New York Times, noted the following:

A suite of four canvases filled with nothing but pigeon droppings by Dan Colen, another popular American artist, also brought a strong price. David Mugrabi, a New York art dealer, bought the work for $545,000, in the middle of its $400,000 to $600,000 estimate. 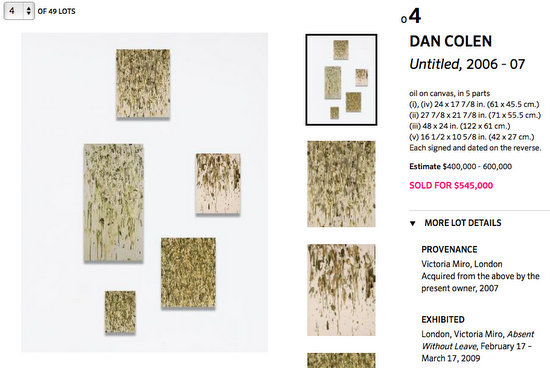 A screenshot of the auction results for Dan Colen's Untitled, 2006-07

I didn't come across this bit of news while actually reading the New York Times. It was shared on Facebook by a painter friend who posted it along with only the briefest commentary: "The art market, jesus."

I feel for Carol Vogel who has to report auction results like this one with a straight face. By the way Carol, there were five pigeon shit covered canvases in the lot, not four, so maybe editorial oversight at the New York Times isn't what it used to be. Is a correction forthcoming?

The real commentary these days happens on blogs and social media sites -- Facebook and Twitter -- where there are no editors to vet content for accuracy and no advertisers (i.e. auction houses or art dealers) who might be offended. I certainly enjoy being able to say what I think about art here on The Huffington Post where the advertisers for laser eye-bag removal haven't yet objected to anything I have said.

At any rate, the news of this $545k birddoggle got 49 shares just on my friend's page and when I re-posted it there were some pretty good quips. "Well...it's not bullshit" was one.

The way I understand Colen's "success" is that it is a social phenomenon, not an aesthetic one. For decades now one of the most common accolades given to artists has been that he or she is "pushing boundaries." Never mind that there are almost no boundaries left: if you can find one -- for example, the idea that art shouldn't just be pigeon poop -- then you have a created a binary situation. There are going to be those who are appalled and who shake their head at how awful your art is and there are going to be those that say "Hey, this is amazing." In a 2010 interview Colen spelled this situation out quite clearly:

Exactly. if your reaction to Colen's "Untitled" is "Ewww... I wonder if his canvases could transmit ocular histoplasmosis?" you are bourgeois. Well, or you are an art restorer worried that you may be called to the Hamptons to re-glue some wayward shit onto one of these next season...

The job of art critics is supposed to be to protect us from really bad art, but Robert Hughes has been gone nearly two years now. Alberto Mugrabi -- the brother of David Mugrabi, the dealer who bought Colen's "Untitled" -- told BusinessWeek after Hughes death that "In another year, nobody will talk about this man anymore." The curse doesn't seem to be working among my Facebook friends -- we still talk about Hughes -- and in regards to protecting us from Colen and some of the other artists who are "pushing boundaries" Jerry Saltz is doing some heroic work on Twitter.

Since he understands the social dynamics surrounding art auctions, he has been using sarcasm and ridicule to make his points. For example, here is the tweet he posted after a Colen M&M drawing sold for $65k: 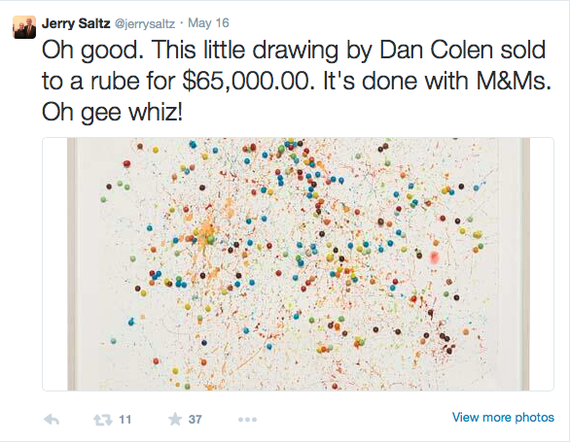 Saltz also called out the "rubes" who paid $320k for a work by art world hot-shot Oscar Murillo: 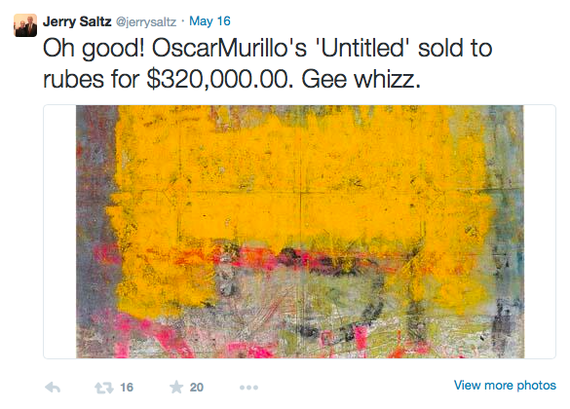 Jerry, I really appreciate what you are doing: it is heroic and sooner or later the Mugrabis of the world may be cursing you too. I sometimes feel like the art market is a ship that has been taken over by dollar-waving pirates: the same ones who brought us junk bonds and the mortgage meltdown. Their weekend homes are filling up with works by Dan Colen, who just bought himself a farm with his art world loot. I'm imaging it as a kind of factory farm filled with cooing pigeons who are busy right now Pollocking up another suite of masterpieces.

Only your tweets can save them -- and the art world -- from a very dismal future. In the meantime, the spokescandies for M&M say thank you!

Correction: After posting this blog it was brought to my attention by Kenny Schacter on Facebook, that Mr. Colen no longer uses actual pigeon shit for this series: he is using oil paint as reported in the Guardian on May 9th. In fact, nobody seems to know if actually Colen or his flocks of assistants ever did actually use real birdshit. He does, however continue to use crack pipes and bubble gum in his work. I stand at least semi-corrected.