On June 7, 2016 Kamala Harris and Loretta Sanchez made history. In November, California will see the first ever U.S. Senate general election match-up between two Democrats. Not only two Democrats but two high-profile women of color, ensuring that a minority woman will succeed Barbara Boxer as a U.S. Senator from California in 2017.

While many headlines proclaimed Harris the favorite, a closer look at election results reveals a very sharp pattern among Latino voters, who favored Sanchez by wide margins. The first wave of results reported on election night showed Sanchez trailing Harris by about 25 points statewide. However, Sanchez' strength in the Latino community showed up in the County-level election results. In Imperial County, which is 82 percent Latino, Sanchez was more than 20 points ahead of Harris. In three other majority-Latino counties in Central California--Kings, Fresno and Madera--Sanchez won more votes than Harris.

As more votes were counted and election results updated we examined voting patterns by smaller levels of aggregation by accessing the Statement of Votes Cast by Community from the Los Angeles County Registrar of Voters. We downloaded election result data for 21 different communities across L.A. County that are over 75 percent Latino, and compared the vote totals for Harris and Sanchez among all Democratic ballots cast in the June 7 primary election. These results are displayed in the table below: 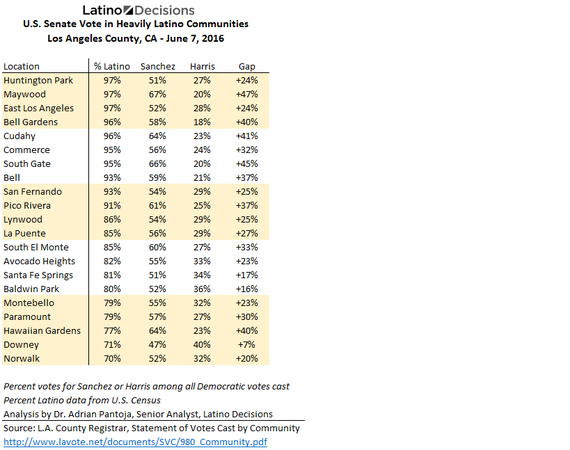 Notice the city of Maywood, which is 97 percent Latino, where Sanchez won 67 percent of Democratic ballots to just 20 percent for Harris--an advantage of 47 points. Similar margins of 40 points or more were recorded in Bell Gardens, Cudahy, South Gate, and Hawaiian Gardens.

The election data in Latino communities are clear: Although Kamala Harris appeared to enjoy a healthy victory in the Senate race, there might be an opening for Loretta Sanchez in November with the Latino vote. In a very thorough analysis of communities in Los Angeles, we find that Sanchez had very large margins over Harris in the most heavily Latino voting communities in Los Angeles. In some cases she was more than 40 points ahead of Harris in areas that are 95 percent Latino. In the November election, we know that Latino turnout will be much, much higher and this could significantly benefit Sanchez if Harris does not have a better strategy at incorporating Latino voters.

While Harris might have done well in the primary, the general election will have much higher voter turnout, bringing out many more Latino voters. In Los Angeles County, about 1.2 million votes have been counted so far in the U.S. Senate primary election, a number that may grow to 1.5 million by the end of the vote count. By contrast, the November 2012 presidential election brought 3.2 million votes in Los Angeles County.

When there is a much larger electorate, with perhaps one million more Latino voters statewide, how will Harris fare if she continues to lose the Latino vote to Sanchez by wide margins? This deficit for Harris could prove to be a critical advantage for Sanchez, however it is not guaranteed. Sanchez will need to make up considerable ground in fundraising where she currently trails Harris by a 5-to-1 margin. The Los Angeles Times reported that as of June 2, 2016 Harris had raised $10 million to $2 million for Sanchez. To win the Latino vote, either candidate is going to have to invest in Latino outreach, not just take it for granted.

Yet, this new data on Latino voting strength for Sanchez may provide possible donors with a reason to invest in the second-place finisher, especially against the backdrop of possible record Latino turnout in November when Donald Trump is on the ballot. An April 2016 national survey by Latino Decisions/America's Voice found that 48 percent of Latino votes are more enthusiastic about voting in 2016 than in 2012. When these "more enthusiastic" voters were asked why they were more enthused in 2016 the number one answer given was "to vote against Trump." 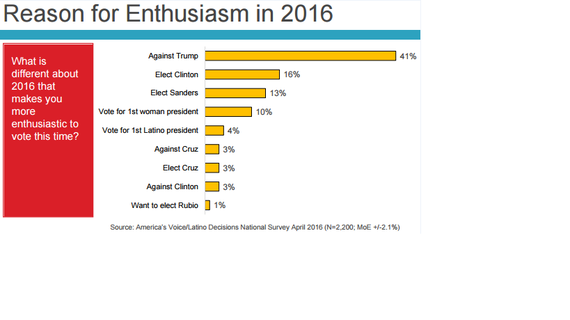 So the $64,000 question is not how the state of California will vote in the presidential election, but this: Can Harris can shore up her Latino support by November, or will Sanchez have a path to the Senate thanks to her strong support among Latino voters?

Dr. Adrian D. Pantoja is Senior Analyst for Latino Decisions and Professor of Political Studies and Chicano Studies at Pitzer College, a member of the Claremont Colleges. Adrian is a leading expert in Latino voting patterns in California and his academic research is published in over three-dozen journals and edited volumes. He has offered expert commentary on Latino politics to The New York Times, The Washington Post, The Los Angeles Time, The Christian Science Monitor, The Huffington Post, National Public Radio, La Opinion and many other news outlets. He can be reached at: adrian.pantoja@latinodecisions.com