Up until the mid-1970s invention of Candypants, America's first-ever brand of edible underwear, eating your clothes was a necessity rather than a choice. For most of human history, when intermittent famine was the rule rather than the exception, the hungry poor would chow down on sticks and leaves, seaweed and fenugreek seeds. In exceptionally dire straits, they even soaked and boiled the leather from their shoes and belts. These famine foods offered little nourishment, the doctors acknowledged, "but they have sometimes kept many from starving."

In recent years, we've seen designers flirt with chocolate bodysuits, lotus root fabric, or even the occasional dress crafted from spaghetti and meatballs. These things have raised eyebrows as conceptual art projects. But it's only now that the concept of edible clothing has begun to shed its campy image and to address some bigger issues, such as living on an exponentially more populous planet with increasingly limited natural resources.

For the past two years, Australian-born and Davis, California-based cheese maker Sacha Laurin has been making jewelry and clothing out of kombucha. Most people know kombucha as a trendy pseudo-health beverage made from fermented Chinese tea, now widely available in upscale grocery stores. Little did we know that the symbiotic culture of bacteria and yeast used to make the drink (called a SCOBY for short) can also be grown to a desired size, dried out, and then manipulated just like a textile. 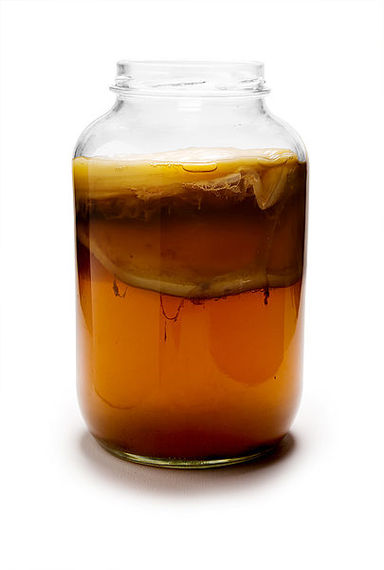 I met Laurin at the San Francisco Cheese School last week, shortly before she was scheduled to teach a class about Gouda. "Making clothing out of kombucha isn't all that different from cheese-making," she explained. "In both cases, we are using the alchemy of the fermentation process to render a raw material timeless. Cheese and kombucha both follow very cyclical processes. You have to keep to their rhythms, or the colonies get upset."

Like many of us, Laurin got hooked on drinking kombucha in 2011; before long, she was brewing it in her garage. Usually people just drink the tea, which is often filtered, and not the somewhat slimy, pancake-like SCOBY used to make it. But when Laurin went to throw her culture out, it caught one of the branches of a nearby tree and hung there, catching the light of the moon. "I couldn't believe it," she said. "The tree was wearing earrings."

Shortly afterwards, Laurin started drying the cultures out and making earrings for her friends. Encouraged by the enthusiastic reception, she started experimenting with larger cultures in her garage. She noticed that different types of tea -- black, green, or white -- could create different colors of microbial fabric, which could be further stained with things like turmeric, hibiscus, and beets. Some of the stains even altered the texture; jasmine flowers softened the fabric, while the addition of hops accelerated the fermentation process and produced a more feathery material. The durability of the fabric could be controlled by the thickness of the culture, which grows in easily peelable layers. (I felt a kombucha cowboy hat that had helped Laurin win first place at the 2013 Sacramento Film and Music Awards. The material was surprisingly sturdy.) Now the former flight attendant and self-taught cheese-maker -- with zero design experience -- is heading to Sacramento Fashion Week. "Some people were a bit miffed," she confessed. 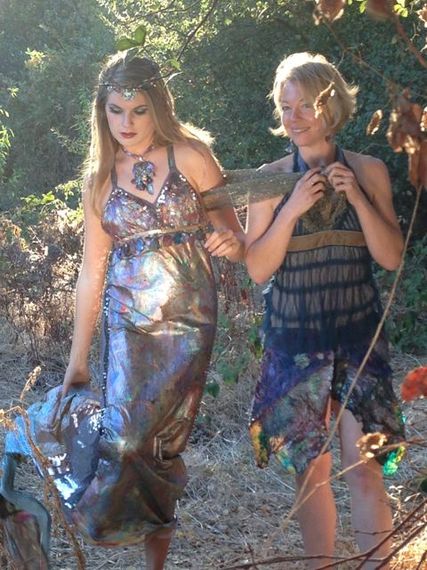 Sacha Laurin (right) with one of her models

Did I mention that Laurin's kombucha clothes are also edible? I was able to sample no less than seven flavors of her homemade kombucha "jerky," made much the same way her dresses are. While some of the flavors are an acquired taste (except for the passion-fruit, which dissolved in my mouth like candy), I knew that the stuff had potential. A probiotic snack with no calories? What's not to love?

Sacha Laurin isn't the first to explore the possibilities of edible clothing. The past couple of years have seen London-based designer and TED Fellow Suzanne Lee launch BioCouture, a firm for researching the potential of natural materials. Her website features some provocative possibilities, such as a bicycle helmet built out of proteins found in crab shells, and a skateboard composed out of carrot cellulose. For the most part, however, these projects remain in conceptual stages. The absorbent Kombucha fabric Lee debuted in her TEDTalk could not resist water or sweat; it was slowly biodegrading in front of her audience's eyes. Laurin, on the other hand, is actively confronting the limitations on everyday wear. With the help of vegetable conditioners, her designs are "almost dry-cleanable" and can last for years, if need be. She's pioneering an incredible concept: fashion with an expiration date.

But kombucha couture may be saving far more than just our closet space. The material has already attracted the interest of food scientists at the University of California at Davis, one of the most renowned agricultural research programs in the world. Not only are the clothes edible, but they also offer a tool for the fashion industry -- hardly one of today's exemplars of sustainable living -- to adapt to a crowded and resource-hungry planet. Food scientists are already studying microbes in milk and cheese to learn how our bodies optimize the intake of nutrients. Growing kombucha fabric, similarly, is essentially a microbial version of a textile factory, a technique whereby living parasites are 'industrialized' for human benefit.

We can't describe Laurin's process as 'industrial' quite yet. Growing the fabric for a probiotic leather dress takes about a week. (Sounds like a lot, I thought, but really a pittance considering the time needed to feed and raise a whole cow.) But if the growing happens on its own, the rest of the process -- the drying, staining, sewing, and fitting -- is rather labor intensive, meaning that her designs won't necessarily come cheap. Her earrings and pendants are going for about $100 in boutiques. The ethereal bohemian dresses that she will debut in Sacramento Fashion Week will likely retail from $500 to $1,000. But by transforming fermented cultures into haute couture, a new chapter in the history of edible clothing might be closer than we think.