I first got to know Carl in August of 2012, shortly after founding Save The Great South Bay.

We new that if The Great South Bay was to be saved, it was going to have to be through bringing science to the problem. The people of The South Shore of Long Island needed to understand what the issues with the bay were, what was causing them, and what solutions were possible.

A couple of calls pointed me in Carl's direction, and soon he was sharing his knowledge and passion with the group, and helping us to understand what it would take to achieve our mission - to bring back the shellfish, the fish, the eelgrass, the marshes, the habitats that decades of neglect and decay had all but removed. 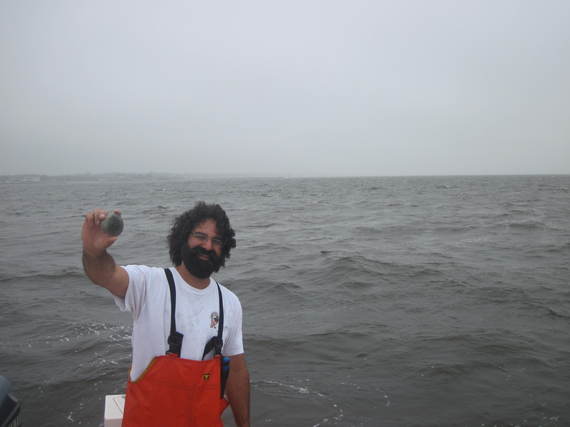 Here then are my 12 questions for Carl:

Carl, where are you from?

My parents were from Brooklyn. Like many others, when they had kids they wanted to raise them in a more suburban setting rather than in a small apartment. We lived in upstairs of my grandparents two family home. My dad, having grown up in Sheepshead Bay, was a fisherman. So when we moved it was to what was mostly a fishing and boating community called Nassau Shores in Massapequa. I was five-years-old, and it was the early '70s, and that's where I grew up. My parents still live there; their house and community were quite damaged from Sandy.

Nassau Shores Massapequa is just on the Nassau side of the Nassau/Suffolk line on the south shore.

Not like suburbia today. No organized sports - we played kickball in the streets with all the neighbors. I fished and crabbed and clammed off the dead end streets and the vacant waterfront housing lots. The community was not yet 100 percent built out. Some of the bayside shorelines were still natural. You could get to the bay, you could play out in the water. Today you can't do that. We used to swim in the canals. Today due to the poor water quality you can't.

Funny thing -- we used to walk up and down the canals, through people's backyards, at night, with flashlights and a crab net - and scoop crabs off the docks for my mom to cook. I think if a kid did that today he'd risk getting shot.

Prior to hurricane Gloria in 1986, the community was full of large old maples and oaks that made a complete canopy of shade over the whole community. Today most of the big trees are gone.

What do you do today?

My father had many jobs when I was younger -- including owning a commercial fishing boat. If he had become successful at that then I may have chosen a carrier in commercial fishing. However the motor blew in the boat and rather than fix it he sold it. Fishing is not an easy way to raise a family. My love of fishing translated to a love of Jacques Cousteau films, which in turn translated into me choosing to go to school for coastal oceanography. I've been employed as a researcher, as a fishery manager, and for the last 11 years have been a scientist at The Nature Conservancy.

TNC is a global conservation organization originally established in eastern NY as a land trust. We came to recognize that to protect the environments will live in, we need to do more than just buy and preserve land, so now TNC employs many different strategies, including expanding its efforts to preserve and heal our oceans.

What is it that you study?

At TNC we work in teams, with experts in multiple disciplines. Similar to putting together a D&D adventure team with a barbarian, a dwarf, and elf, and perhaps a druid or wizard, we assemble people with diverse skills in what we call action teams. Marine and coastal scientists, policy experts, social scientists, economists, technical analysts, etc.

When I started out at TNC I was doing some original research, but much of what I do now is synthesize monitoring observations, translating current academic research findings into meaningful management recommendations, and communicating with citizens, community leaders, agency staff etc. with the goal of finding ways to simultaneously improve sustainability of our way of life and our natural world.

What marine/aquatic issues are you seeking to resolve?

Our end goal is for the estuarine [the zones where the rivers meet the sea] and coastal environments that define the very nature of Long Island to be healthy and self-sustaining, where both the needs of people and the rest of the natural world would be met.

We know we cant go back to the past, but we want to change trajectories so that our coastal ecosystems stop their collapse and start to recover. Even if we are successful, a Long Island of the future won't look like the Long Island of the past. But we will be able to swim and fish in healthy clean waters and enjoy the beauty of clean healthy shorelines and and the taste of sustainably harvest seafood.

What's the most important project you are working on right now?

All signs are pointing to water management, or the lack of it, as the biggest threat to Long Islands future. Although there are many threats to water, including how we use it, TNCs main focus as of late is on waste water management. What we do with water after it leaves our homes and businesses? Where does it go? How is it processed (or not)? Waste water is an enormous source of nitrogen pollution, and that nitrogen impacts the integrity of our drinking water supply and of all the fresh and salt water both inland and along our coasts.

If this project goes as planned, what will things look like on Long Island 10 years from now?

Long Island was Americas first suburb. We are suffering a fate of unplanned and unchecked suburban sprawl. We never built the kind of waste water infrastructure necessary to support 2.8 million people in Nassau and Suffolk counties, not with all of us living on top of the aquifers that are our only supply of drinking water. Without a modern infrastructure, we will not be able to realize the full value of Long Islands natural assets- its bays, beaches, fisheries - the reasons many of us choose to live and stay here. Ten years from now, our goal is to have these assets assured for generations to come.

What's the biggest environmental problem for Long Island and how do we address it?

Water, water, water. It's not only and environmental issue, it's a human health, economic, and quality of life issue. There is no one single blanket fix, but in general the biggest component would be transitioning to 21st century modern waste water treatment and resource recovery technology.

There are other things we can do, such as curb our cultural obsession with extracting the cleanest water we can find only to then load it with pesticides and nutrients and spilling it all over the ground to grow lawns. There's a growing 'natural lawns' movement on Long Island. We invented the suburban lawn. We can reinvent it with native plantings sustain them organically.

To what extent to Long Islanders understand this problem and how do we raise awareness?

I think more and more Long islanders are waking up to the issues because they see and smell the consequences of what we are doing to our waterways. However there is still very much lack of understanding of how our water systems work, what everyone of us are doing to cause the problems. Even with all the people that live here, this is a problem we can solve. It will take time, and it will take doing things somewhat differently, but I'd emphasize not in a way that would negatively impact our quality of life. We need to be the ones to take charge. If we do so, the environment will in time respond so that the young people who live here today will see their children enjoy Long Island's natural beauty tomorrow.

I know some people think it's too late. Perhaps they think they will just move, perhaps they will die before they can benefit, and so they might resist making the investments we need to change course. So it's the parents and the young people and the people who love Long Island that need to all become advocates.

What are your favorite marine creatures and why?

That's like asking for a favorite song -- it can change from day to day. While I might normally choose an invertebrate, today I think I'll call out the northern stargazer -- one of Long Islands only electrically charged fish, named for its upturned eyes. I call this fish out today because I think it's poetic to imagine a small unimposing fish at the bottom of the bay gazing up at the night sky through murky waters to gaze at the stars. 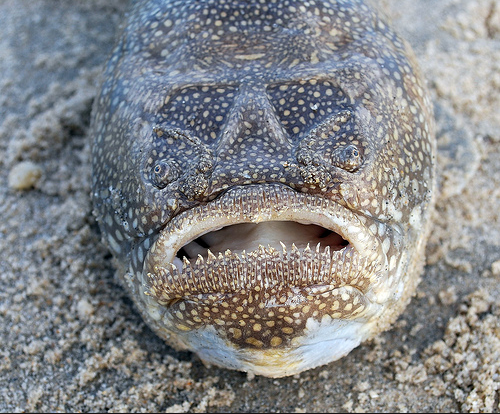 Can Long Island be saved?

Long Islanders can do remarkable things when we put our minds and hearts to it. We put a man on the moon and we cracked the genetic code. We set a national precedent by being the first county in the country to ban DDT. Now the osprey have returned and we once again have bald eagles, once pushed to near extinction, nesting on the Long Island. Not only can Long Island be saved -- it must be saved. New Yorkers like to lead. Success here can translate to success around the country as others follow our lead.

So my answer is yes -- but its going to take a village, its going to require the older generations to make investments in the future, even though they might not all be around to reap in its benefits. But then again -- isn't that how its supposed to work?