The Challenges of Depression


Depression affects almost 15 million Americans and is the leading cause of disability among U.S adults, yet many people with depression continue to go undiagnosed and untreated. Depression remains a condition that is identified through a clinical assessment focused on signs and symptoms, and there is currently no available diagnostic blood test or scan for depression. Additionally, choosing the right depression treatment can be tricky, as it remains difficult to predict how a person will respond to a particular medication, or to cognitive behavioral therapy (talk therapy). Furthermore, a national shortage of psychiatrists means patients may not be able to access timely medical care.

From my own perspective, I think of "depression", or more specifically "major depressive disorder", as an umbrella term that encompasses many biologically different, although somewhat overlapping conditions. These different types of "depression" have sometimes been referred to as subtypes and categorized differently, a longstanding point of discussion within psychiatry over the last 100 years. Many different risk factors have been identified for depression (see picture below). The heterogeneity of depression is likely to have led to the failures to find the "genes for depression". 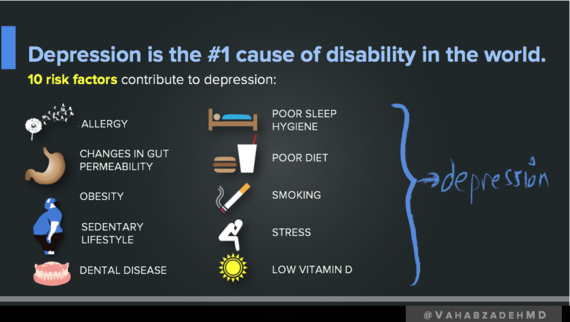 Given this background, can data science, and in particular machine learning, help revolutionize how we diagnose, treat, and monitor depression? A growing line of evidence gives us hope...

What is Machine Learning?

Machine learning was originally developed through the study of artificial intelligence. It has been defined as giving computers the ability to learn without being explicitly programmed. Well, what does that mean? Machine learning recognizes patterns in data that humans cannot detect either visually or by traditional analytic techniques. Machine learning requires machines to do just that, to learn. While it can take some time for machines to be "trained" on data and for useful algorithms to arise, once this has happened, machines excel at data analysis. Machine learning tools have the ability to speedily process huge amounts of data, with none of the fatigue that humans would rapidly face.

The combination of machine learning and big data is a perfect match and has huge potential in healthcare.

Sounds a little bit like science fiction? Well not really - machine learning is already all around us. From voice recognition, to fraud detection, to the emails that end up in your spam box, people are using machine learning to make processes more efficient and effective. Importantly, machine learning will have a dramatic impact on medicine, and in particular mental health. In our own research at Brain Power, we are already witnessing how big data and machine learning can help us to bridge the gaps between educational, health, and social services for child and adults with autism.

How about using machine learning to link clinical depression with biomarkers? In one depression study, machine learning tools were used in addition to traditional statistics to analyze the relationship between 67 biomarkers in 5,227 research subjects. This hybrid technique was able to identify 3 biomarkers for depression, namely red cell distribution of width, serum glucose, and total bilirubin. Red cell distribution of width has been linked to inflammation in the body, and a line of research has linked together depression and inflammation. Serum glucose tests are used to screen for diabetes, a condition that has a complex relationship with depression, often occurring concurrently. Lastly it has been suggested that bilirubin is an antioxidant, and depression has been linked to oxidative stress. While some of these associations are tenuous, or speculative at best, this study does do something very useful, it identifies potential biomarkers that can be taken forward into the next round of research.


Suicide and depression are strongly linked, with suicide being the second leading cause of death for young people ages 15 to 34. Suicide rates in the United States have remained largely unchanged for the last 50 years. One of the most difficult jobs for psychiatrists is to assess suicide risk in our patients. A particular challenge is incorporating all of the clinical data that we obtain, such as patient's history of depression, their use of drugs, and their past suicide attempts, into producing a suicide risk assessment. What if we had a tool that would help us to do that in a more quantitative way, helping us to more accurately identify high risk patients, and give them preventative care? I was particularly intrigued by a pilot study that used data from 144 patients with mood disorders. By using machine learning to evaluate clinical data, the researchers were able to produce three different machine learning algorithms that could distinguish between people that had attempted suicide, and those that had not, based on the patient's prior clinical data. The prediction accuracy varied between 65-72%. These machine learning algorithms could be potential tools to help target suicide prevention interventions.


One central challenge is being able to predict how patients will respond to psychiatric treatments. For example, in depression we have a wide range of antidepressant medications and cognitive behavioral therapy based approaches. At the present time there is no way of predicting how an individual is going to respond to a particular medication, although some companies have suggested that genetic testing could help with prediction. One study looking at 4041 patients with depression, found that by using a machine learning approach, they could predict response to the antidepressant citalopram with a highly statistically significant accuracy of 64.6%.

The Future of Psychiatry 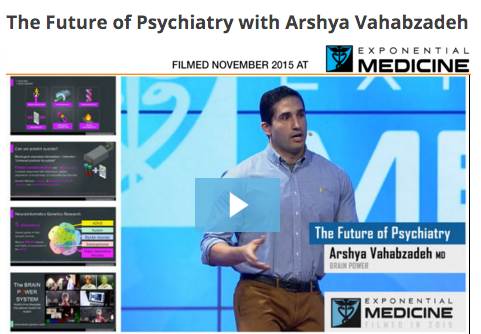 I recently gave a talk at Singularity University about the Future of Psychiatry, you can watch the video here.

There are many unmet mental health needs, and in the near-term the majority of mental health diagnosis and treatment will continue to be provided by humans. Technological approaches, such as machine learning, but also including telemedicine, smartphone apps, and wearable devices, have the potential to expand access and augment the work of clinicians. At the moment the quoted research is still quite preliminary, and I would not expect your family physician or psychiatrist to be using it just yet. However, this research does give us hope, and illustrates the promise of data science, and more specifically machine learning, in mental health.

I believe that the future of mental health, and psychiatry, will be grounded in a combination of data science and neuroscience.