Over the past 60 years the U.S. has been involved in more than 10 wars and invasions. These have included World War II, the Korean War, Vietnam, the Bush Wars (in Iraq), and Obama's war in Afghanistan. By ignoring the Powell Doctrine* in both Iraq and Afghanistan we have engaged our massive military industrial complex in a seemingly "endless war." However, Mobile Money, a rapidly emerging disruptive technology, could put an end to war itself.

The idea of setting up cell phone networks in war zones - and then paying people to maintain the peace - comes from 20-year-old University of London (UCL) student Bianca Griffith. Her vision: use Mobile Money to "buy" peaceful behavior until it becomes a habit and the local economy is stabilized.

As she describes it, each family in a village would be given a cell phone. They would be able to use their phone to send and receive calls. Their cell phones would also include a Mobile Money system. Each day they would be asked to help maintain peace in their community (monitored by satellite, and on-the-ground reporting). For each day of peace, they would receive $5 US in their cell phone's Mobile Money account, translated into the local currency.

By making peace personal, that is, by giving each family in the war zone the chance to make money by enforcing peaceful behavior, the U.S. government could redirect the flow of money away from weaponry, violence and insanity of war (as revealed in the latest Wikileaks documents) toward rebuilding war torn communities.

To shift the world away from war, we need to redirect the flow of money that fuels war.
President Barack Obama could start by redirecting 2% of the flow of money that now supports modern warfare into an Afghanistan Mobile Money Account. It could also be integrated into Secretary of State Hillary Clinton's current cell phone initiative which uses cell phones to update villagers about actions happening in their area.

This shift could happen "overnight." Like the introduction of the desktop computer and cell phone technology, Mobile Money has the ability to change the global money game and rewrite the rules of tomorrow's economy.

In addition, Mobile Money ventures are on the rise. According to GSM World, a global organization which unites 800 of the world's mobile operators with more than 4.5 billion transactions, as well as more than 200 companies worldwide, there are more than 147 Mobile Money deployments happening worldwide.

The goal of the GSM's Mobile Money for the Unbanked (MMU) program, for example, is to provide mobile money services to 20 million people by 2012; and to stimulate its deployment into countries where it doesn't already exist.

Welcome to Afghanistan: a market ripe for Mobile Money, and ready for peace. Can GSM's global mission unite the two?

*What was the Powell Doctrine? What, caused its creator, former Commander of the Joint Chiefs of Staff Gen. Colin Powell, to ignore it in our rush to invade Iraq? According to Joel Rauch M.D., Vietnam veteran Powell based the Doctrine that guided U.S. policy during the Cold War years on these three principles: (1) A sense of urgency: their threat to our national security, or action, demands a call to war. (2) Clearly defined goals. And (3) A fixed timeline for getting in and out. He credits the GroupThink (Janus) effect for Powell's defection from his own principles.

Alexia Parks is founder and director of Parkinomics, for the New Economy. She is also author of eight books, including Parkinomics, an Amazon business and motivational bestseller. It offers "8 great ways to thrive in the New Economy", for the individual who wants to lead a life of "meaning, prosperity, and purpose." Parkinomics includes ideas and links to resources. 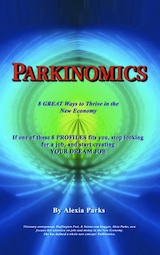